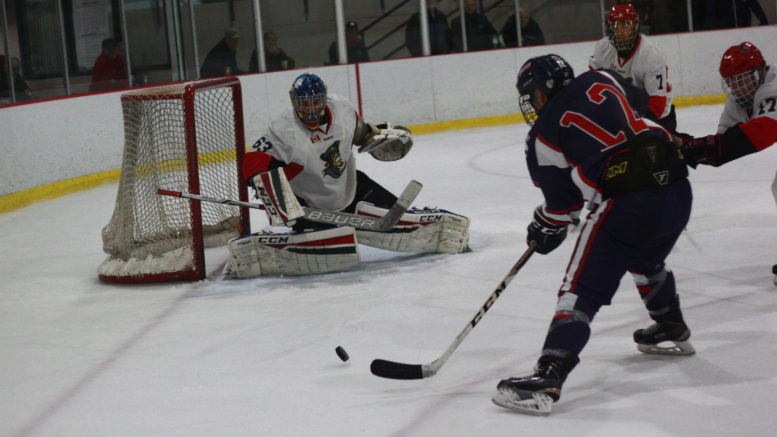 The Pirates didn’t have the jump they needed to defeat the Port Hope Panthers last week, but delivered another punishing defeat to the Campbellford Rebels.

The Pirates dropped a 6–2 decision to the Panthers last Thursday before taking it to Campbellford in a 13–1 win on Saturday night.

“We were very disappointed with the play on Thursday night,” he said. “We were down a couple of key defencemen and the guys did not bring their best effort.”

Pirates leading scorer Jordon Cannons was honoured prior to the start of Thursday’s game, having been selected as the Tod Division’s player of the month for September/October. Cannons picked up right where he left off.

Just 44 seconds into the contest the Pirates forward found himself on a two-on-one rush with defenceman Tye Eaton. Eaton fed the puck to Cannons who tried to send it right back, but the puck somehow found its way into the net with Cannons receiving credit for the goal.

The Panthers didn’t miss a beat, holding the puck in the Pirates zone for several stretches following the goal. Less than five minutes later they had the tying tally from Cameron Harris, who had a couple of whacks at the puck before putting in a rebound past sprawling goaltender Aaron Young.

The teams traded chances but, when the final minute started to tick off, it appeared they would head into the second deadlocked at 1–1.

However, the Pirates made one last rush. Noah Brant carried the puck below the goal line at the side of the Port Hope net and fed a pass into the slot to a waiting Cannons. The Pirates captain fired a backhand shot past goalie Colin Husovic to give Picton a 2–1 lead, but it didn’t last.

Just seconds later, Evan Foley capitalized on rush chance to make it 2–2. The teams headed into the first intermission tied while the Panthers held a 14–8 advantage in shots.

“We played an OK first period, but really fell asleep in the second period,” Masterson said. “Port Hope is one of those teams still that can score quickly and take advantage of a team that’s not at its best and that’s what they did.”

The Panthers took control from the start of the second. Just 42 seconds into the frame, Austin Veleke made a beautiful saucer pass over a Picton stick to Harris, who slipped through the defence, deked, and slid a backhand through the five hole.

A Cody McNabb blast from the slot a short time later made it 4–2 and Kallen McFarland and Jarrett Desormeaux added goals in the remainder of the contest to round out the scoring.

The final shot totals were recorded at 53–16 in favour of Port Hope.
Masterson attributed the loss to a lack of focus and intensity.

“We got a 10-minute misconduct for one of our key defencemen, Nick Kyte, to start the second period and that kind of got the ball rolling on a bad note in the period,” he said. “Then it just seemed to snowball, once they scored a couple of goals guys kind of lost focus.”

Masterson said the team’s intensity level in the contest wasn’t where it has been. He said part of that is due to the number of games the club has played against struggling teams in recent weeks.

“We just didn’t have the jump we needed,” he said.

Following the big loss, Masterson said there was a message delivered to the team. That message was evident in Saturday’s blowout of Campbellford.

Just 44 seconds into the game it was Cannons leading the way again, scoring on a play from Brant and Devin Morrison. Jaydon Wood added a goal, from Morrison and Kurtis Wood, at the 2:29 mark. Morrison added a goal of his own, from Kyte and Will Harrison, at 5:32 of the first.

The Pirates held a 24–8 shot advantage in the frame.

Morrison tallied the only goal of the middle frame, scoring 25 seconds into the period on a play from Riley Manion and Cannons. The shots were 45–15 after two periods.

Cannons completed a hat trick 8:23 into the third with Manion and Kyte collecting assists. Brant (power play), Bertrand, and Bilker scored to bolster the enormous lead. Jaydon Wood scored his third goal of the game at the 15:35 mark to make it 13–0.

Just 23 seconds later Jared Maracle found the back of the net for the Rebels, but that would be all the offense Campbellford would muster.

“There was a definite message after the Port Hope game that we as staff weren’t happy and we have to bring that intensity level each and every game if we’re going to compete with the top two teams in the league, which we think we can,” Masterson said. “We came to the Campbellford game and the boys were itching and ready to play, they had a really strong first period and then sort of put it in cruise control for the rest of the game.”

The Pirates take on the Rebels again tonight before taking on the first-place Napanee Raiders on Friday. Puck drop for both contests is 7:30 p.m.

The Pirates added some forward depth last week, picking up 1997-born forward Brett Walton. Listed at 6’4 and 235 pounds, Walton is expected to bring size, grit, and a big shot to the lineup.

Off the rink, the Pirates will be conducting a food drive in support of the Salvation Army on Sunday, Nov. 12 at 1 p.m. Those interested in assisting the team can pick up food drive bags in the lobby of the Prince Edward Community Centre. Filled bags can be returned to the community centre or they can be left on front porches for pickup. Those wishing for the team to pick up food drive bags are asked to leave a message on the Picton Pirates website or Facebook page.