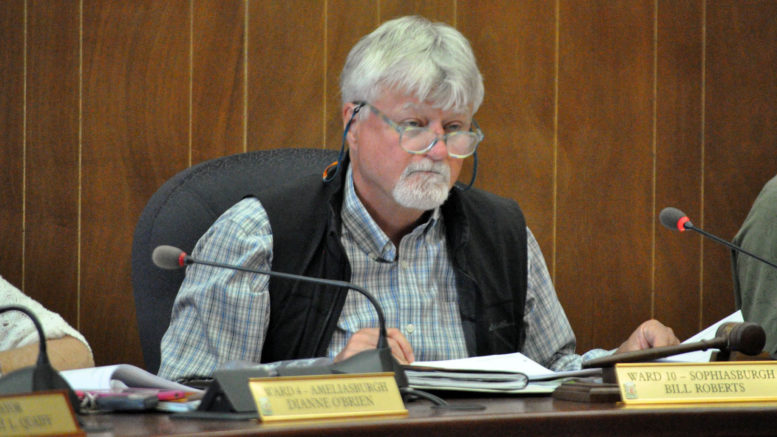 Seeking action - Sophiasburgh councillor and community and economic development commission chair Bill Roberts believes for as long as affordable housing has been a municipal priority, the County should have more tangible results addressing the issue. (Adam Bramburger/Gazette staff)

County considering joint deputation to province with Lennox and Addington

Two members of council expressed their disappointment with a lack of results on the affordable housing file during last week’s community and economic development commission meeting.

On Tuesday, community development director Neil Carbone provided the commission a verbal report on initiatives related to affordable housing development in the county.

Carbone spoke to an RFP the County issued regarding affordable mixed-price point development at the former Wellington arena property.

He told the commission one joint proposal between the United Church development program and a local private developer came forward. Additional meetings, site visits, and feasibility studies have occurred and more meetings are planned in the near future.

“I know there hasn’t been a lot of news about what is happening on that front, but it’s a slow process because there’s a great deal of money that needs to be invested and we have to make sure the partnership and approach is right,” he said.

Chair Bill Roberts asked Carbone how “affordable housing” is defined. He learned the provincial policy statement and the Canadian Mortgage and Housing Corporation use the definition of 80 per cent or less of market rate, typically for rent or for sale prices on freehold housing. With a hot real estate market like the county’s, that means high dollar values.

“Prince Edward County is a little higher than you would typically consider as affordable, simply because our cost of housing and rental is higher than surrounding areas due to lack of supply,” Carbone said.

Though he indicated the number might be higher, Carbone said last he checked the number was $240,000 to $260,000 for a sale and $800 for a rental — numbers he acknowledged are higher than most people would consider affordable. While the county has a crunch at most price points, Carbone said the municipality is also lacking in “less-than-affordable” or social housing units.

Carbone said while there are townhouse projects in the pipeline that are affordable by that standard and attractive to the retirees coming to the county, it has a challenge to address needs for lower incomes.

Roberts indicated he’s a little tired of waiting to see those projects develop.

“It strikes me that council after council after council has said affordable housing is a top priority and still nothing practical seems to happen,” he said. “We have activity, but it’s not apparent that activity leads to shoves going in the ground, w which is the nexus of so many of our issues in the county be it education, health, workforce retention or expansion. It’s such a big issue.”

He mused that “at some point, we have to have some practical results” and mused an independent housing authority might have more flexibility to get the job done in concert with Shire Hall.

“I agree with you Mr. Chair, since 2000 when I’ve been involved, we’ve always said affordable housing is a priority for us, yet we never have any skin in the game.”

Quaiff added that sometimes developers are hesitant to provide affordable units and when they offer cash-in-lieu councillors “get caught in the trap” because there is a need for all types of housing.

“We really have to be cognizant that we have a serious shortage of affordable housing here and there has to be a strategic way going forward of how we can finally address it.”

The mayor said that typically when the County meets with provincial representatives at conferences, it looks to the Ministry of Transportation for infrastructure needs and the Ministry of Health and Long-Term Care because of the need for a new hospital. At February’s Rural Ontario Municipal Association conference, he said he’d like to see the County go in a different direction as it’s made its case on those fronts.

Instead, he said County will focus on a join delegation with Lennox and Addington through the social services department to make a case about the definition of affordability and see if money is available.

Carbone said the municipality has tried several ways of incentivizing affordable development including partnership, leveraging surplus land, and direct incentives. None have worked.

“When you have a market where there is a high return on investment for more traditionally or executively priced developments that’s there the capital will go. That’s not a value judgment, that’s a reality. The developers have told us that,” he said.

He favours coming up with some creative solutions for the problem.

“We need to be aggressive and take some risks and we need to think outside the box,” Carbone said. “It’s only the last few years that the affordability issue was recognized as the biggest challenge we have to growth and job creation as well. Now it’s impacting us across multiple sectors for multiple reasons. Now is the time (to act).”

Carbone said staff would bring some ideas back to the commission in the future.