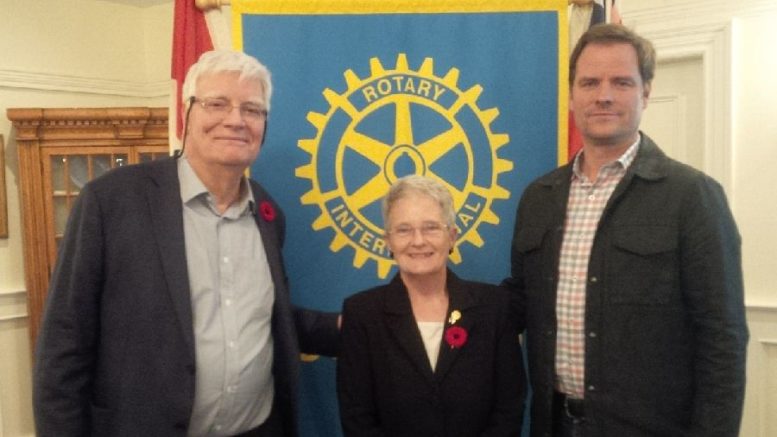 It’s a problem that is prevalent worldwide, one that has widespread and wide-ranging impacts but, ultimately, one that few in the first world can fully understand.

The Rotary Club of Picton annually endeavours to shine a light on the problem with their landmine dinner, giving speakers the opportunity to share stories of clean-up efforts and the impacts of unexploded ordnance in regions ravaged by war.

Handicap International was founded in 1982 by two French doctors who had been working with Doctors Without Borders. After experiencing the lingering devastation left by landmines and other unexploded ordnance, they created the organization to help refugees living in camps in Cambodia, Thailand, Burma and Laos.

Newhouse, current secretary and past president of Handicap International Canada (HIC), told the Gazette Tuesday that since the organization’s founding, it has grown to offer a wide range of programs and activities to assist disabled people across the world. However, the organization is best know for its efforts to demine former war zones.

“Our expertise at Handicap International is really in demining and also destroying cluster bombs and anything that’s going to explode,” he said. “There’s a lot of leftover ordnance from all sorts of conflicts.”

The efforts are especially noteworthy, Newhouse said, as unexploded bombs tend to reserve their most devastating impacts for ordinary civilians.

“One of the things you need to know is that in armed conflicts, between 90 and 98 per cent of casualties are civilians and a large number of those are women and children,” Newhouse said. “The people who are actually involved in the conflict are two to a maximum of 10 per cent of casualties.”

He said landmines are very inexpensive to create and are notoriously difficult and costly to remove. Mines typically cost in the area of $5 to make, but can cost $2,000–$10,000 to remove. Many are crafted from mostly plastic, which makes them even more troublesome to locate, and they can often be washed away during powerful storms and flooding, infiltrating previously mine-free areas.

Newhouse said the impact of landmines doesn’t stop with their explosive nature. He noted a story from Bosnia, which had been at war between 1992 and 1995.

“One of the warring sides had got into this little area where there were 11 villages, small villages of about 100 to 200 people,” Newhouse said. “Basically a total of about 1,000 people lived in the area, and they had one well.”

When the troops were on their way out of the area, they notified those living in the region that landmines had been left around the well. There was nothing the villagers could do. The total economic activity for those 1,000 people stopped and they moved away. That situation persisted for more than a decade until Handicap International stepped in to demine the well. The organization found a total of three mines.

“For 15 bucks, they’d stopped all economic activity in the area for 11 years,” Newhouse said. “That’s what happens with mines, there are millions of stories like that.”

Handicap International is currently working in conflict zones in countries such as Libya and Syria, and has expanded efforts to include those impacted by natural disasters in areas such as Indonesia. In order to offer aid to communities destroyed by the 2010 7.0 magnitude earthquake in Haiti, the organization first had to become experts in building roads. Approximately 3,000 individuals were disabled during the earthquake and, once they had improved access, the organization stepped in to train physiotherapists to assist them.

“Rotary is probably the world’s biggest fighter of polio,” Newhouse said. “If polio has almost been beaten, it’s because of Rotary.”

Cluster bombs are also a huge issue for HI. The bomb casings contain hundreds of bomblets designed to explode on impact. About 30 per cent of them don’t explode. About the size of a baseball, the bomblets are often brightly coloured and it’s often children who are maimed after picking them up.

“They’re also designed, just like landmines, not to kill you,” Newhouse said. “They’re designed to disable you, because a disabled person is much more expensive to society than a dead person — that’s the whole disgusting economics behind landmines, cluster bombs, and so on.”

Lemke, an actor and ambassador for HIC, has seen some of the effects of cluster munitions during time spent in Laos with the organization. From 1964–1973, the United States dropped over two million tons of ordnance over Laos, including 270 million cluster bomblets.

Lemke chose to go to Laos because the country is very close to the area that spurred the founding of HI. He said in Laos, it’s easy to see the impact organizations like HI can have — almost all of the organization’s outreach efforts have a presence in the country. The organization got its start crafting prosthetic limbs, the impact of which Lemke saw first hand at Laos’ COPE rehabilitation centre.

“I had the great honour of watching a guy take his first steps on his new leg that he’d been waiting for,” he said. “… It’s so inspiring to see this guy, who literally had no limb until he came there and now he’s walking.”

He said the experience was both touching and disturbing, knowing that civilians are still dealing with the effects of a war long over.

“The Vietnam War, for Pete’s sake, it’s been over for 40 years and the landmines are still there and people are still dying to this day,” he said.

Lemke said aside from donating to the organization, the best thing the public can do to help is inform themselves and continue to hold politicians accountable for their actions.

HI is strictly apolitical, the organization’s ultimate goal being to assist vulnerable people.

Rotary Club of Picton member Andy Janikowski said Tuesday evening’s dinner was all about raising awareness of the issue of landmines and giving the public an idea of what can be done to improve the situation.

“It’s important to highlight the significant impact that these things have on communities in general,” he said. “We’ve made this an annual commitment, annual awareness raising.”

He said Rotary’s interest is in helping those in need both locally and internationally.

“In the past we’ve supported the establishment of community colleges in Ghana, we’ve supported water projects around the world, and this is another focus of concern for us — the tremendous impact on development, on people’s health, on children, on women, that these bombs pose,” he said.

Newhouse and Lemke also told Rotarians about HIC’s ongoing project in Kenya. More than 180,000 people who have fled conflict in South Sudan are living at the 12-square-kilometre Kakuma refugee camp.

“When we say camp, there’s nothing temporary about it,” Newhouse said of Kakuma. “It’s going to be another 20 or 30 years, you’re not going to get rid of the problem quickly.”

In 2014, the organization set up a temporary rehabilitation centre, essentially a tent, to assist the many victims with disabilities. Now, HIC is fundraising more than $100,000 to erect a solid structure.

“We can run it, so the ongoing maintenance, that’s no problem,” he said. “The problem is what we’d like to do is give them a permanent building.”

Handicap International was instrumental in the founding of the six-member coalition called the International Campaign to Ban Landmines (ICBL). The coalition played an integral role in the establishment of the Ottawa Treaty, a convention prohibiting the use, stockpiling, production, and transfer of anti-personnel mines. A total of 162 states are party to the treaty and the ICBL received the Nobel Peace Prize in 1997 for their efforts. Headquartered in Lyon, France, Handicap International currently implements projects in 60 countries worldwide. For more information, visit www.handicap-international.ca.