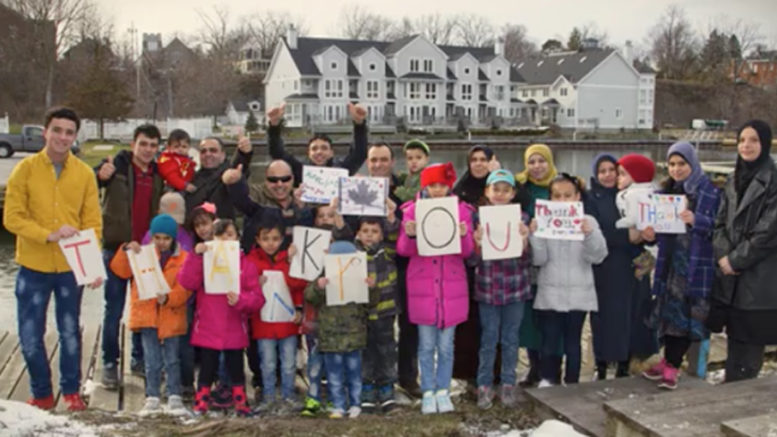 Building community - Prince Edward County welcomed the Al Jasem family in 2015 and the PEC Syria group has worked to resettle three additional, related families in the area. The new documentary SponsorLand focuses on the first year with the county’s first refugee family and its sponsors. (SponsorLand screen capture)

For the past two years, the Al Jasem family — or “Syrian refugees” to many — have been some of the most talked about people in Prince Edward County, but few people truly know them or what they’ve been through.

On Friday, the public will have their chance to get a closer look into the family’s day-to-day life and its interactions with the PEC Syria team that helped them relocate here with a sneak preview of a new documentary at the Regent Theatre.

As a thank you to the community for welcoming her to tell its story, filmmaker Michele Hozer will be offering a free preview screening of SponsorLand, an 88-minute account of the family’s first year in Canada.

Hozer told the Gazette Monday that TVO put out a call in fall 2015 for programming relating to Canada’s 150th anniversary this year. She grasped upon the theme of Canadians having a bicultural reality — one she could relate to, being raised in Laval, Que. by first-generation parents herself — and the Syrian migration crisis at that time.

“In the midst of the Syrian crisis, Canadians had opened up their hearts and doors to over 25,000 Syrians. We were hailed as international heroes and an answer to the refugee crisis,” she said.

“I wanted to go beyond the 30-second feel-good clips. What happens when you offer help for free? Are there hidden expectations? What is the line between care and control? As refugees, what are the sacrifices in order to fit in? SponsorLand doesn’t necessarily answer all of them, but we look at all those questions.”

Hozer liked the idea of telling the story in Prince Edward County because she wouldn’t be set in a big city where people would expect the refugees to be settling. It’s also not a deeply multicultural community.

In an unconventional setting, she quickly learned she couldn’t use the traditional documentary crew she had planned. A family moving into a foreign setting wouldn’t necessarily be comfortable with a lot of people and large boom microphones occupying their home. That distraction also wouldn’t go over so well at community functions.

Hozer rented in Picton from September to December, then talked her husband into moving their family here for six months. Embedded in the community, she had a chance to talk with the PEC Syria volunteers and Al Jasem family off camera and gain trust. She also decided to pick up the camera herself to film, noting “it’s not something you can do just by popping in.”

She said she learned there were ups and downs on the road to resettlement.

“In a sense, it’s very much like a marriage, or in this case, like an arranged marriage with no real clear road map. What I found is there’s ups and downs, ebbs and flows. It takes a lot of patients and understanding.”

During her time around the family and volunteers, Hozer learned of an Arabic expression, “shway shway,” which translates to “bit-by-bit” which was a popular expression for volunteers and family members to use when they were frustrated. Hozer said it kind of describes the way trust was built and the way the relationship worked.

She said she was personally surprised by the unexpected amount of effort volunteers put in. Also, Hozer wasn’t anticipating the level of chaos in a home with 11 children, but she learned to incorporate a lot of activity into her scenes.

The filmmaker hopes a couple messages will be driven home by the work.
“For one, in 2015 at the time, there was a federal election and there was a divide in Canada in wanting to let the refugees in or not. We elected a Liberal government and proceeded, but there’s still a slice of the population that’s a little bit leery of letting people in. It’s this fear of the “other,” she said. “One off the goals is to really show them as a likeable family. They’re rambunctious, they’re fun and they care about their kids. It answers that fear of the unknown. The more we know of something, the less we fear it.”

Another is the theme that refugees, too, live with fear and anxiety about the changes they face and how much they have to sacrifice to be able to live their new lives. That, too, may be unexpected to many.
“I’m not expecting to change things — that’s a lot for a 90-minute film to do — but to start a conversation. It opens up dialogue and a greater acceptance. That’s really the message of the film.”

Hozer has already showed SponsorLand to PEC Syria founder Carlyn Moulton and the Al Jasem family. She said they received the film warmly .
Moulton agreed and praised Hozer for her work.

“She did an impeccable job, there was so much material to distil it down to the length the broadcasters wanted.”

Moulton said some of the featured family members spoke quite eloquently in a film which offered some surprises for PEC Syria organizers. In particular, she said she didn’t think volunteers understood how afraid the family was when they first came — for example, early on, the eldest Al Jasem son, Slieman, powerfully shares on camera his father Abdel Malek’s fears that volunteers would kill his family once they took them outside of Toronto.

“There’s some learning in it.”

The film also grapples with the idea of perceptions of Syrian refugees and questions surrounding terrorism and identity politics as family members speak in the days following an attack on a mosque near Quebec City.

Two years after sponsoring the Al Jasems, the first of four families PEC Syria has settled, Moulton says the exercise has been one of mixed emotion, which is conveyed in the film. She notes the family was independent and functional before arrival.

That’s produced some learning experiences as family members and volunteers don’t always agree on every course of action.
Moulton said it’s been very hard for volunteers to grapple with the fact the story continues. While the Al Jasems are grateful to be here, family members and friends are still being injured or killed in Syria, Lebanon, and Turkey. With modern communication, the dangers are still very close to home and immediate. There’s still some mixed emotions about the blessings of life in Canada paired with that reality.

It all makes for a moving story, courtesy of a courageous family.
“I think it was remarkable how generous the family was in terms of access. They really opened themselves up to the film makers. That kind of openness and sharing is a kind of vulnerability, too,” she said. “I hope everybody appreciates the complexity of the journey they’re going through.”

Friday’s screening starts at 7 p.m. Tickets should be reserved in advance via tiny.cc/cdhdoy. Following the film, there will be a question-and-answer session with Holzen, Moulton, and some members of the Al Jasem family moderated by Bill Roberts. An additional screening is also being planned for PECI students.

Moulton is optimistic about the event.

“I’m looking forward to sharing it with the community. I understand it’s almost sold out if not sold out and I think it’s great that people might have a deeper understanding of family and what we’ve gone through too.”
Both Hozer and Moulton, however, said the entire story can’t be captured in the events of a year, but rather, over several generations.
To watch the documentary, visit www.sponsorland.ca.