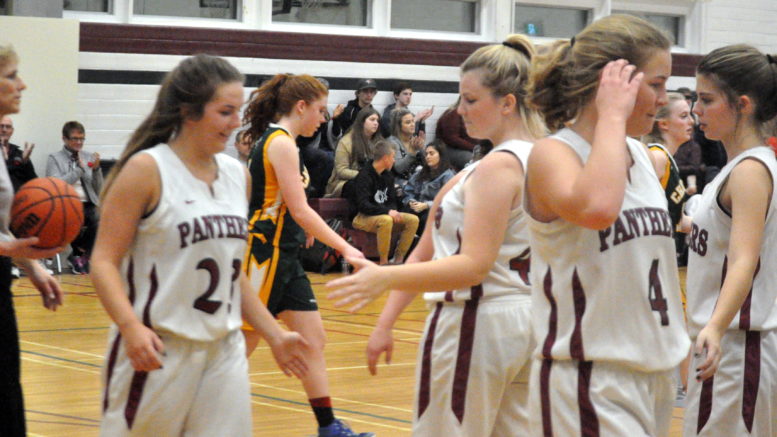 Chargers give champs an early scare

The PECI Senior Basketball Panthers are headed back to the Bay of Quinte Conference final Friday after a 58-46 win over Centennial Wednesday. Early on, that was far from a foregone conclusion.

After beating the Chargers by 29 points less than a month ago, the unbeaten Panthers might have come into the contest expecting a cake walk. Centennial had no intention of that.

Into the second quarter, the teams were neck-and-neck, tied one time at 19. The favourites turned the game on a 10-1 run fuelled by two hard-fought baskets down low by Abby Margetson and another by Lydia Snider. That effort seemed to spark a packed gym and offer some breathing room.

“We’re not going to trick anybody. That’s what we do. We outwork you, we outhustle you, and they stepped up,” said coach Rob Garden. “When we get contributions from those players in those situations, it helps us. They’re easy points, they’re hard-working points and it kind of lifts everybody on the bench too.”

A strategic wrinkle helped in creating those opportunities. With Centennial getting offensive traction on a screening system executed well by point guard Anna Davidson, the Panthers shifted from a man-to-man defence into a zone designed to take it away. The change resulted in turnovers.

“We had to do something different. It wasn’t in our the game plan —  we thought we could defend the man-to-man screens better than we did. I’m glad we had it in our repertoire, though, it threw them off and gave us a chance to build a lead,” Garden said.

Improvements defensively allowed the Panthers to break out up court and get established. Some of their skilled players started to take over. Go-to player Vanessa Willis took control in transition and benefitted from the Chargers respecting the PECI low game. She had nine second-quarter points to lead the turnaround and continued her pace late for a game-high 22. Mikalya Leavitt also battled for 12.

On the other side, Davidson still managed 22 points. She was consistently on the score sheet, save for that second quarter when the Panthers limited her to two.

Willis was pleased with the way the Panthers executed after some early turmoil.

“Our first quarter, we had some trouble getting to the basket, but I think maybe it was just nerves. It was a big game for us even thought we were expecting to win. They came out and battled hard, maybe we weren’t expecting it,” she said. “Later on, we were playing better together and playing aggressively.”

Whatever the reason for the battle, Garden said maybe it was a game the Panthers needed.

“You need some adversity to move yourself forward. We faces some there and I think we responded OK. Sometimes, it doesn’t matter how ugly it is, you’ve just got to get the ‘W’.”

The Panthers will play a motivated St. Theresa Titans squad in the Bay of Quinte final. After St. Theresa lost to PECI by one in the big game last year and fell in their lone regular season game 53-47, they’ll seek redemption.

Willis said the Panthers will take the lesson the Chargers offered into play at Moira Secondary School Friday evening at 7 p.m.