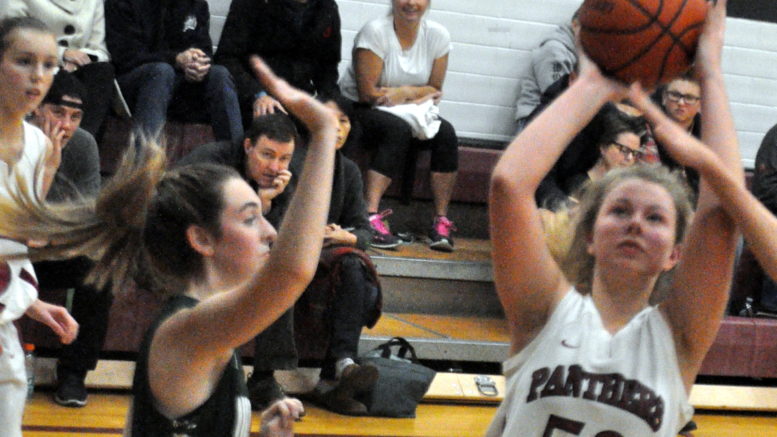 Plagued by slow starts in the past, the PECI Junior Basketball Panthers wanted to leave no doubt they were ready to play a the Bay of Quinte Conference semifinal Wednesday.

Coming off a first-round bye, the Panthers didn’t want to let any rust show against the visiting Nicholson Crusaders. They were aggressive and energized, maybe a little too much with seven fouls in the fist four minutes,  but it set the tone in a 43-29 triumph.

The Panthers carried their confidence to an early 10-1 lead.

Second-year player Myla de Boef said the team was very conscious of its approach as it took the court for the biggest game of the season to date.

“The game plan was really to focus. In our huddle before the game, we got together and said we have to focus and believe we can do this. We wanted to make sure that we were 100 per cent in the game and ready to go,” she said. “We were hungry for the win and that really drove us to the fast start.”

PECI put itself in position to execute high-percentage shots offensively, while giving the speedy Crusaders little room to work. The high intensity would give coach Rob Garden room for pause, however, given the mounting concern of foul trouble. Madalynn Snider, one of the team’s defensive stalwarts, found herself with three of her four personal fouls really early on.

The Panthers took a timeout and had to make a difficult adjustment.

“We had to dial it back a little bit, which is hard because you don’t want to take your foot off the gas pedal,” Garden said. “I thought we did a good job managing individual fouls and, as a team, we managed to keep everyone in the game.”

In the week of practice the Panthers had to prepare, they devised a strategy to take a speedy zone that helped Nicholson win the teams\’92 last meeting. With shorter, tighter plays working for passes to the low post the Panthers believed they wouldn’t get too spread out or turn the ball over. Guards Sydney Davies and Hannah Goad were able to move the ball with precision and more often than not, de Boef was there down low to benefit. She posted a game-high 21 points.

“Myla scored the ball very well from the short corner. It’s something we worked on and it’s nice to see them translating things we worked on in practice to a game,” Garden said.

The win gives the Panthers a chance Friday to face the St. Theresa Titans in the Bay of Quinte Conference final. The Titans went through the regular season unbeaten. They knocked off the Panthers when the two teams met 41-34, thanks to a stifling pressure defence.

The Panthers say the Titans’ reputation as the top seed is well earned, but there’s a game to play.

She added she thinks the Panthers are playing their best basketball of the season now.

Another morale boosting statistic shows that PECI outscored St. Theresa by seven points in that game. Garden said his team can build from that going into the game. They’ll also practice specifically to counter St. Theresa’s considerable strengths.

“If we can get past that pressure, I think we match up pretty evenly but they’re quick, they’re athletic and they steal the ball. We haven’t seen that all year,” he said. “But, like I said to the girls, sometimes it’s best to be the underdog too. There’s no pressure and you get to play loose and see what happens”

Tip off will be at 5 p.m. at Moira Secondary School. It will be the first time in school history that PECI has two girls teams playing in the league final and de Boef is looking for the opportunity to make some more news.

“It’s really exciting and it’ss good for the girls. We’re super pumped to get there, we’ve really earned it this year.”