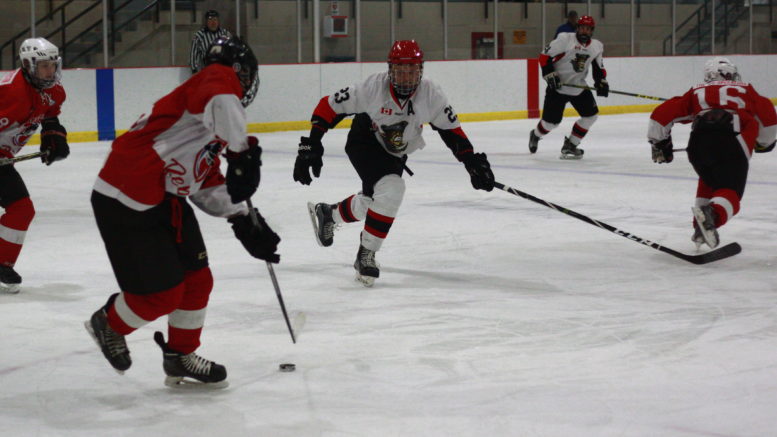 Pirates forward Gerald Bilker takes away a passing lane during the first period of last Thursday's game. Bilker had two goals and two assists in the contest. (Chad Ibbotson/Gazette staff

The Picton Pirates faced the division’s two extremes this week, coming away with a split in games versus Campbellford and Napanee.

Picton once again prevailed over the last-place Campbellford Rebels in a 10–2 contest on Thursday before falling 5–0 to the first-place Napanee Raiders on Friday night.

“It’s extremely difficult, one of the things we’re battling quite a bit this year is we play one of the weaker teams and have it really easy…then you have to turn around play a team as talented as Napanee and it definitely hurts you,” he said.

Masterson said the coaching staff have repeatedly delivered the message to players that they can’t allow bad habits to creep into their game, but it seems bound to happen with the club playing lots of lopsided contests.

Overall, Masterson said the team wasn’t happy with the effort Thursday night, but said it was important the team got the win.

“It’s so hard in games like that to be too tough on the players,” he said. “…We’re trying not to focus on the negatives or the positives in those games because, at this point in Campbellford’s season, it’s just not a situation where we can get a lot out of those games.”

The Pirates took some time to warm up against the Rebels, but got better as the opening period wore on. At the 7:27 mark, Gerald Bilker fired a shot from the top of the circle. The puck seemed to deflect off of bodies in front and found the twine behind Campbellford goaltender Nathan Walford. Nick Hoey and Justin Arnold notched assists on the play.

Just under six minutes later, Bilker increased the lead to two when he fired a quick snap shot from the harsh marks off the bar an in. Noah Brant and Devin Morrison had the helpers.

Hoey made it 3–0 at the 16:07 mark when he one-timed a pass from Jordon Cannons past Walford. Riley Manion also assisted on the play.

A blistering wrist shot from Jaydon Wood made it 4–0 just over a minute later. Chase Burden got the assist.

The Pirates carried a four-goal lead into the second, out-shooting the Rebels 34–7 in the opening 20 minutes of play.

Jordon Cannons scored on a play from Brant 7:05 into the middle frame to make it 5–0. The five-goal edge remained the difference until the 15:38 mark when Will Arsenault finally got the rebels on the board.

Any thoughts of building some momentum dissipated quickly, though. Will Harrison made it 6–1, from Bilker, less than a minute later. Brett Walton, from Manion, added another before the period was out.

Leading 7–1 to start the third, the Pirates looked for more of the same. Harrison added his second of the game 4:36 into the period to give the pirates a seven-goal edge, but a quick answer from Matt Moran cut the lead back to six. However, Manion and Cannons would add to the Picton lead to bring the final score to 10–2.

Aaron Young made 22 saves on 24 shots as the Pirates collected their fifth win in as many games against the Rebels.

It was a much different story Friday night.

Riley Steeves opened the scoring for the Raiders 2:59 into the first with Brayden Bertrand in the box for holding.

Both teams were getting their chances through the first half of the frame, but it was the Raiders capitalizing. Austin Labelle made it 2–0 Napanee at the 8:43 mark, then Tod Division scoring leader Ryan Casselman made it 3–0 at 11:57.

The shot totals were 17–17 through 20 minutes, but the Pirates entered the second in a significant hole.

“We came out and had a really good first period versus Napanee despite going down 3–0,” said Masterson. “In the first we were actually happy with our effort and thought we deserved a better fate.”

The Raiders showed their defensive ability through the remainder of the contest, limiting the Pirates to few shots.

Labelle tallied an unassisted goal with less than three minutes remaining in the second period to make it 4–0. Devon King scored in the final minute of the third to bring the score to 5–0 as the Pirates weren’t able to claw their way back into the game. The shots were scored at 40–19 for the Raiders in the contest.

“Napanee is a solid team all the way through and their first line in particular is really a Junior A line,” Masterson said. “Casselman is averaging three to four points a game in our league and he was one of the top scorers in the OJHL last year.”

He said after factoring Steeves as an overage player and Labelle, who also has Junior A experience, it’s a very difficult task to shut down Napanee’s top unit.

“When they were on the ice, we were chasing a lot and that’s the reality of what you’re going to have to face against those guys,” said Masterson.

The Pirates will have a chance to avenge Friday’s loss tonight when the Raiders visit the Prince Edward Community Centre. Masterson said he’s hoping the team will be able to take advantage of home ice and get the match-ups they want.

“That’s the most important thing, we were struggling to get those match-ups Friday and couldn’t,” he said.

He said he’ll also look for the team to bring more intensity to the rink tonight.

“We were a little too passive against them, kind of standing back in awe at times — particularly in the second and third periods,” he said. “We want to take the game to them a little bit more.”

The Pirates will head to Amherstview to face the Jets on Sunday. Puck drop for both contests is 7:30 p.m.