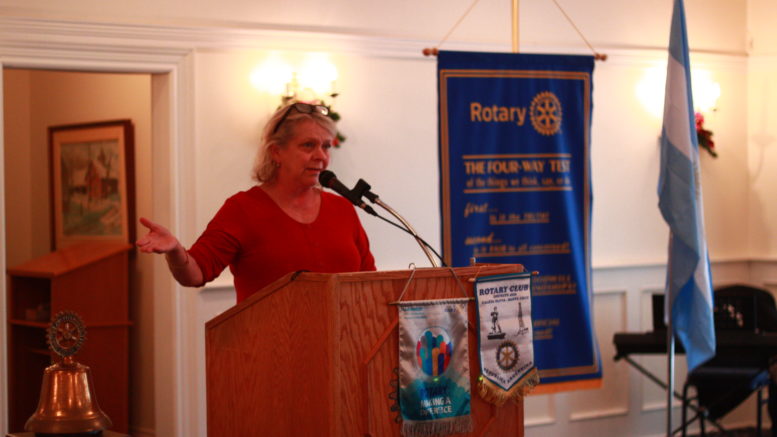 It’s common for traditions to have murky or unknown origins, but Suzanne Pasternak is looking to make sure the story behind Nova Scotia’s annual gift of a Christmas tree to the City of Boston isn’t one of them.

In her latest work, titled The Story of the 1917 Halifax Explosion & The Boston Tree, writer, composer, and playwright Suzanne Pasternak gives a detailed background of the gesture’s origin. Pasternak — a former resident of Cape Cod, Massachusetts and Halifax, Nova Scotia — shared some thoughts about the book and the impetus behind its writing with members of the Rotary Club of Picton on Tuesday afternoon.

On Dec. 6, 1917 at 9:06 a.m. the SS Mont-Blanc — a French cargo ship heavily loaded with powerful explosives — collided with Norwegian vessel SS Imo in the strait connecting Halifax Harbour to the Bedford Basin. A fire on the Mont-Blanc ignited the cache of weapons, causing a horrific explosion that devastated Halifax. About 2,000 people were killed in the disaster while approximately 9,000 were wounded, including 1,000 who were blinded by shards of glass and other debris. At the time, it was the largest man-made explosion ever recorded.

While it’s a subject with enough stories to fill countless pages, Pasternak focuses on just one. Following the explosion, Massachusetts Governor Samuel McCall and Boston businessman and philanthropist Abraham Ratshesky co-ordinated a huge humanitarian rescue effort that sent doctors, nurses, and members of the Red Cross from Massachusetts to Halifax.

“I was just so struck by the humanitarian response to the explosion,” Pasternak told the Gazette. “I just really thought it was a story that needed to be told.”

Pasternak told Rotarians she came across the story while working on another project — Vimy and the Child Soldier from Hillier. The central focus of the PECI drama production written by Pasternak was Robert Clarence Thompson. At the age of 16, days after his third enlistment, Thompson’s battalion was sent to Halifax to assist in the relief effort. While researching, she came across a government document written by Ratshesky — a report to Governor McCall.

“It’s detailing this epic humanitarian rescue mission that went to Halifax within hours of the explosion,” she said. “It read like a Hollywood script — it was heart-wrenching.”

When Ratshesky and the team of doctors and nurses arrived in the city, they found it in disarray; the traumatized Canadian medical personnel, civilians, and soldiers who’d spent 30 hours saving lives were exhausted. The Americans spent eight days assisting the wounded, co-ordinating relief efforts, and preparing and organizing aid plans that would be in place following their departure.

“What really impressed me was the emergency response that started right away,” Pasternak said. “I was just so moved because in this day and age we as humans really need to remember and to remind ourselves that we have deep reservoirs within us to do the right thing and that we will help strangers in need without question.”

In recognition of those efforts, the people of Nova Scotia annually send a 50-foot Christmas tree to Boston. The tree is displayed in the Boston Commons and is lit during a major celebration each year. That celebration is attended annually by 30,000 people and watched on television by another 300,000.

Pasternak said many of them likely don’t know the story behind that tree, and that’s something she hopes the book will change.

The product of three and a half years of research and writing, the book is already getting traction in that regard. The Ratshesky family has committed to putting a copy of the book in every school and library in Boston and the Boston Globe has interviewed Pasternak for a piece about the book.

“They need to know the story and that’s why the Ratshesky family and the Boston Globe really want to get that story out there,” said Pasternak.

The book is written in a way that will satisfy both young and old. Pasternak said the response to the story, and the fact it will be distributed in schools, is gratifying.

“That’s what I live for, that’s what I do,” she said. “When the high school here did Vimy and the Child Soldier the fact that it was students involved, and really being touched by the story, really means everything to me as an artist.”