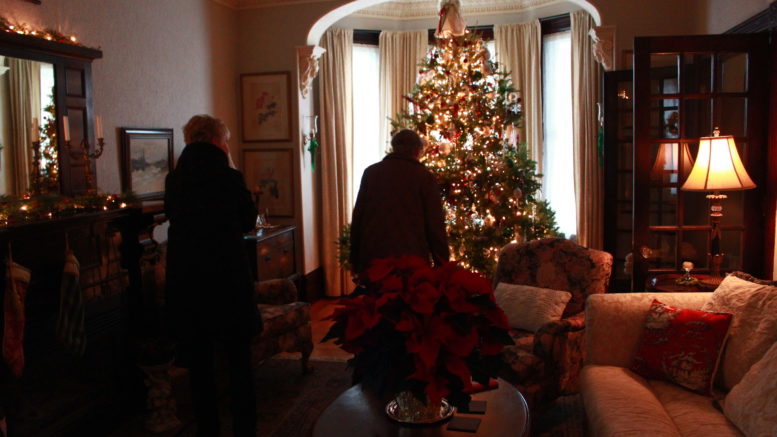 Touring — Visitors explore the historic architecture of Picton's Babbitt House during the 2015 Christmas in the County House Tour. The house was built by policeman Horatio Babbitt in 1886. (Chad Ibbotson/Gazette staff)

The ever-popular Christmas in the County House Tour will feature eight unique properties next month.

The event, which supports the Prince Edward County Built Heritage Fund administered by The County Foundation, returns on Sunday, Dec. 3 from 11–5 p.m.

The tour has sold out the past two years, due at least in part to its laid back, self-guided nature said Marilyn Lauer, one of the annual tour’s organizers.

“I think we have a successful formula because it seems to sell out every year and the reputation of the tour seems to grow well beyond the county,” she said. “A lot of people come from the county of course — and that’s where the majority of tickets are sold — but we are enticing people from as far away as Toronto and Peterborough and Ottawa.”

Ticket sales for the tour are already ahead of where they were last year and the event is more than half sold out. While the Built Heritage Fund is dedicated to preserving and restoring historic buildings in Prince Edward County, Lauer said participants can expect a mix of properties on the tour.

“The majority are older homes, but we have no aversion to having something new and exciting and contemporary on the tour as well,” said Lauer. “There’s lots of variety for people.”

As an example of that variety, Lauer said a recent modular construction that was transported to the county in pieces and a longstanding historic chapel in Black River are among the structures included in this year’s jaunt.

She said the 2017 tour will cover ground it traditionally hasn’t, focusing on properties across the municipality’s southeast.

“For a few years we’ve had some offers from potential hosts from the Cressy and Prinyers Cove area and we have politely declined because we felt it was just to far for people to go,” Lauer said.

This year, however, she said organizers have put together a tour that they believe will work geographically and allow participants to visit all of the properties within the 11–5 timeframe. Settled by United Empire Loyalists in the late 1700s, that geographic area also fits with yearlong celebrations of historic milestones Prince Edward County 225 and Canada 150, Lauer said.

Since it was established by organizers of the tour, the PEC Built Heritage Fund has been able to assist several notable projects. In 2015, the fund granted $5,000 to The White Chapel to assist with the cost of cedar shake roof repairs, $1,500 to St. Mary Magdalene Anglican Church to complete their tower restoration project, and another $1,500 toward Picton’s Carnegie library. Last year, the fund supported Alex Fida’s restoration of the House of Falconer with a grant of $5,000 and the fund has also contributed to projects at the Regent Theatre and the schoolhouse at Ameliasburgh Heritage Village.

“We will continue to do that,” she said.

One of the reasons the tour has been so successful and able to generate those dollars, Lauer said, is simple curiosity.

“People are always curious to see beautiful homes and it’s a real privilege to be able to see inside a private home that has been restored — especially a historic one,” she said.

She said the event also offers a bit of holiday fun.

“It’s very festive and the homes are decorated according to the tastes of the owner, so no two houses are the same,” she said. “…It’s a homemade, county feel and it’s not formal, it’s not officious, it’s a lot of fun.”

The tour’s organizers believe Prince Edward County is a special part of the world. Lauer said the intent is to spread awareness of local history and the need to preserve it. Overall, she said efforts to spread that message seem to be making headway.

“We’re just really happy to be involved in this,” said Lauer. “There are so many causes in the county to support that are very, very worthy.This is a kind of fun one, but we think the money is going to an important purpose.”