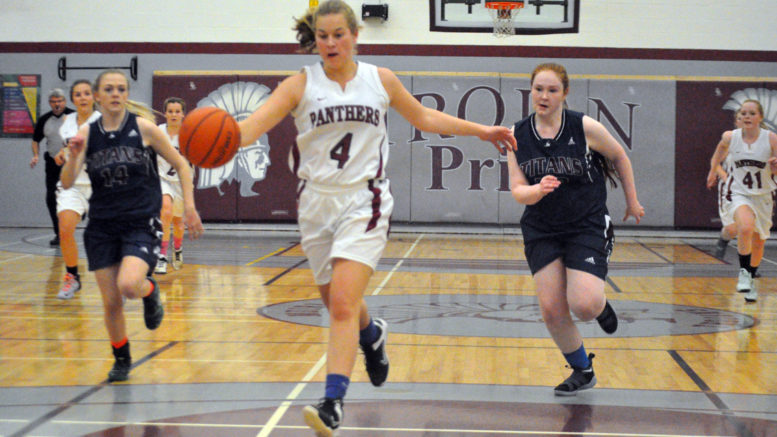 It was a slightly different path to perfection for the PECI Senior Basketball Panthers this year — and that made their second consecutive Bay of Quinte Conference championship that much sweeter Friday evening.

They lost two frontline starters from last year’s unbeaten team. They didn’t practice as often early in the year. Their coach was splitting duties between two squads. In the end, it didn’t matter. These Panthers rallied together to produce another 12-0 season and to claim back-to-back championships for the first time in school history after beating the St. Theresa Titans 61-48 Friday.

“It’s amazing, we lost a lot of our starters and the girls have really stepped up offensively in scoring roles,” said captain Vanessa Willis. “To be able to continue to do well and win Bay of Quinte again without those players is a testament to how well we play and how far we’ve come.”

Coach Rob Garden admitted he was concerned where the scoring would come from going into this season, but he credits his players for pulling together and embracing a team concept from Day 1.

“We’re much more balanced this year in terms of our approach. Last year, I think the girls were more tentative. Maybe they didn’t want to make a mistake so they didn’t attempt to score,” he said. “This year, through the whole season we were getting contributions from different kids. In games like this, we didn’t need to reply on one or two people when we could get four, five, or six players scoring.”

All around, we’re definitely a different team, but we’re winning in different ways.”

Commitment and preparation shone through Friday at Moira’s Ken Smith Gym. With their experience in the big game last year, the Panthers elected to drive to Belleville Thursday to work out at Moira and get a grasp of the open floor and the bounces off the rims there. It paid off.

“The girls who never played before got used to it and we did too,” said veteran Chloe MacDonald. “It’s bigger than ours at home so we got to know what we were working with.”

Early on, the Panthers were hitting their shots with more confidence than the Titans as they opened up a 36-26 lead by halftime. The Panthers also managed to limit opportunities against, in some cases scrapping for turnovers and some easy put-ins of their own.

Later in the game, the Titans had to rely almost exclusively on three-point shots. While they hit five in the second half, the Panthers continued to march the ball up the court and methodically take their baskets. Each time up the floor, they would go into a ball control offence designed to eat time off the game clock.

“We’ve been practicing that for the last couple weeks. We knew if we were in a situation where we were up we wanted to have the confidence to control the game and control the pace,” Garden said. “The last five-and-a-half minutes, we did a good job of limiting their opportunities and eating 30 seconds off the clock every time we could.”

As she has often done in big games over her PECI career, Willis shone with 22 points. Lydia Snider battled for eight, primarily in the paint. Rising star Mikayla Leavitt and steady two-way vet Hannah Smith each had six. Nine players would score and nearly every Panther contributed to a hallmark aggressive defence.

“The same kids continue to produce game in and game out, but in games like this, it’s the unsung kids that don’t necessarily get the recognition,” Garden said. “It’s Jessie Swackhammer coming in for three or four minutes of really quality time. It’s Abby (Margetson playing really good defence. Those are the ways you win championships. Lydia Snider has been one of our unsung heroes all year. She competes. That’s an important part of what we do.”

The Titans’ scoring was spread out. Mackenzi Chapman led the silver medalists with 14 points. Hannah Farrell had 10.

The coach said the culture PECI is developing was really evident in the contest, which was played before a supportive crowd making the road trip form the county.

“It was a good win from tip to buzzer. I didn’t feel at any point we were not in control and that’s a testament to these kids and the experiences they’ve had over the years. They don’t come into these games any more with uncertainty. They came in knowing what they needed to do and they executed perfectly.”

Snider said the championship was really the result of 12 girls wanting the same thing and committing.

“We all just worked as a team and had the same goal to defend the title and win again. It feels good as a team to have done that,” she said. “It’s a very good group. I really enjoyed being a part of a team with them.”

MacDonald agreed, adding the team came in ready to finish the job.

“We came in here, we wanted to win, we were ready to fight and we did it. It’s awesome. We’re on Cloud 9 now,” she said. “Everyone contributed every game. We were always rolling 12 players and that’s how we win.”

The Panthers will hit the road for Fenelon Falls for the ‘AA’ COSSA playoffs Thursday with a good chance to continue their success. They’ll start against Lindsay at 12:30 pm. with hopes of reaching the final at 4.

Willis indicated they want a crack at a provincial championship.

“Although this is a good win, we’re not done. We have to get ready for next week and get ready for COSSA and confirm that spot for OFSAA again. That’s our goal.”