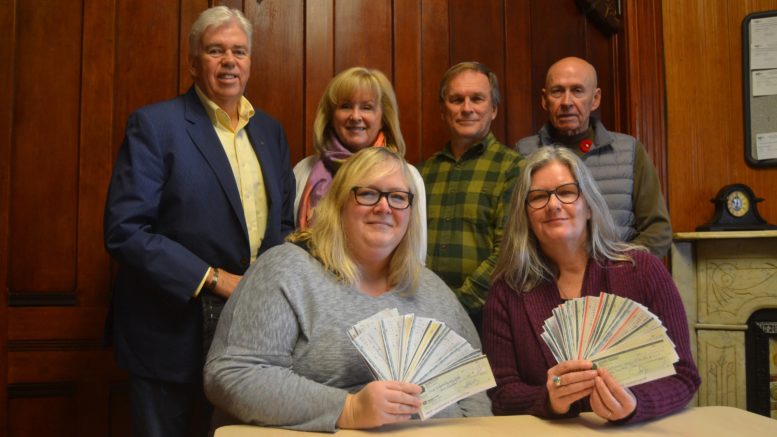 A local adult education program accepted over $9,000 from a local philanthropist group Thursday.

The newly organized 100 People Who Care PEC handed 93 cheques for $100 each to representatives of the Prince Edward Learning Centre, the first such presentation made by the group since its inception earlier this year.

The funding will go to help local adult learners who are assisted by PELC to build their learning and literacy skills and enhance employment goals.

The program receives base funding through the Ministry of Advanced Skills and Training Development for the collection of county residents currently enrolled in the program — mostly under 30 years of age —  but the additional funding secured last week will help further assist students through experiential learning opportunities, extra staff support, extra resource time and enhancement of the food for learning program.

PELC executive director Kathy Kennedy and program co-ordinator Lori Farrington said they were thrilled to be presented with this windfall.

“The goal is to help adults stay in school and we’ve got a great group of students,” Kennedy said. “Most of the students have families so we look at the work we do is lifting the family up as well”.

While the support will be realized almost immediately through resource addition and enhancement, the students also get an emotional lift from the donation.

“As a community organization, this a validation from the community of the work you are doing,” Farrington explained. “The students are going to see that the community is supporting them and what they are trying to accomplish. It was pretty shocking to them that 100 people want to donate to the program.”

While the group hadn’t quite reached its centennial mark at its first meeting — hence the 93 cheques — it has since eclipsed the 100 member mark.

“I think at some point we will have 150 members but for our first one, this has been incredible,” said organizing member Mark Davis. “This is such a unique group because there’s not a lot of rules. There’s no presidents or vice-presidents. We do not touch the money except to hand it over. It’s fabulous and unique in its own way.”
The group meets quarterly with each member bringing a $100 blank cheque to the meeting.

Three candidate charities are drawn from a hat and the nominating member provides a pitch to the group, highlighting why that particular charity would benefit from the $10,000 or more donation and how it would help the Prince Edward County community as a whole.

A vote determines the winner.

Among those members at Thursday’s presentation were Davis, David Fox and Richard Byers who were all members of the 100 Men Who Care Quinte group.

Byers liked the work the Quinte group was doing but doubted if any charities on this side of the Norris Whitney Bridge would be impacted.

“Mark and I looked around and we realized we didn’t have a chance a of getting any county charities supported,” Byers said.

Also pulled from the hat at October’s meeting was the Matt Stever Fund and the Festival Players.

After winning, the PELC won’t be able to be nominated for one calendar year but can be nominated after that time frame.

Fox added Mennacher was a major supporter of education when he was principal at Athol-South Marysburgh Public School and the PELC was something that resonated with her.

The next meeting for the 100 People Who Care PEC is Jan. 25 at the Waring Hall.