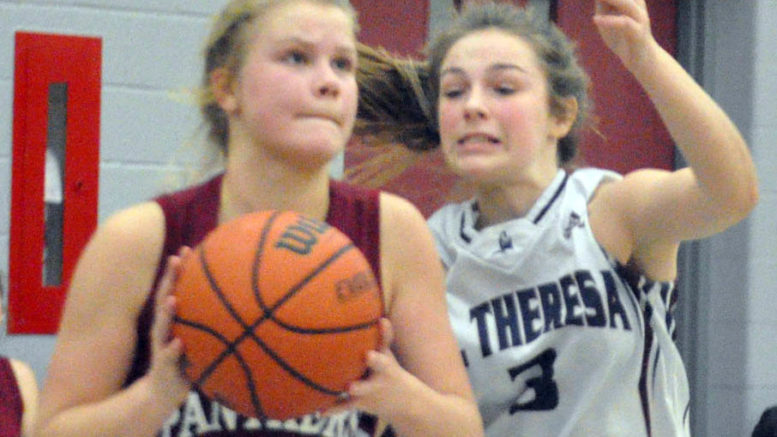 Everything was going right for the PECI Junior Basketball Panthers in their first trip to a Bay of Quinte Conference final Friday, but a calculated risk in the third quarter ended up being costly.

The top-ranked St. Theresa Titans pounced and closed out the game 39-29 — the closest margin between the two teams this year — but the Panthers had themselves within striking position in the second half.

In a game where both teams seemed tentative with their early shots, the Panthers withstood a first quarter where Titans sharpshooter Halie Turner outscored their side with all nine of her team’s points. They also had some success breaking St. Theresa’s vaunted full-court pressure defence with surgical precision on full-court breakout plays, at least once the Panthers had confidence passing the ball quickly through the middle would work. They even outscored the Titans 12-9 in the second quarter. At half, they trailed by just two points.

“That was a really good first half for us,” said coach Rob Garden. “We made some adjustments last night in practice, we translated them to the game today and we were right there,” he said .

PECI evened the score early in the third quarter, but the momentum swung quickly. Knotted at 18, Panthers forward Myla de Boef was assessed her fourth foul under the offensive basket. With a tough decision given she’d scored 12 of her team’s points at that stage, Garden elected to take de Boef out of the game to rest her for some gruelling minutes in the fourth quarter.

The Titans quickly put together a six-point scoring run with de Boef on the sidelines. Mackenzie Provost had two easy put-ins from below the basket as the Titans were able to get a series of shots off. Garden said it was a tough break for his team.

“She was our key rebounder. They didn’t do much on offence there except out rebound us and get the put-backs. We gambled. Myla had four fouls. We put her back in and when we did, we started to control the boards a little better.”

The Titans got a buzzer beater to end the quarter that would give them a seven-point cushion going into the final stanza.

The Titans won the final frame 13-10 as they continued controlling the paint down low. Centre Olivia Onuah put up eight points of her 11 points to help the Titans finish off the Panthers. Turner led the champions with a 13-point game.
Titans coach Tom Callahan said his team did what it wanted to do in the second half after battling the Panthers’ active zone defence early in the game.

“In the second half, we were able to cut down on turnovers and worked the ball inside to Olivia Onuah and Mackenzie Prevost. We had too many forced shots in the first half and we probably had 20 turnovers, which is hard to overcome,” he said. “Prevost had a couple big baskets and rebounded really well.”

Callahan credited the Panthers for changing their game plan and executing to make the final a great game to watch.

That said, Garden acknowledged that particularly on offence, the Panthers didn’t have enough contributors putting up points or clearing boards. Beyond de Boef’s game-high 15 points, Madalynn Snider had nine points. Hannah Goad chipped in four and Sydney Davies one in the dying minutes.

“It wasn’t what we had drawn up, that’s for sure… We can’t expect to win any championship game with only two kids scoring.,” he said. “Part of it was nerves, but give credit to St. Theresa, they played pretty good defence.”

Despite the silver-medal result, the Panthers were fairly upbeat about their appearance in the final.

“It’s always a great accomplishment to get to the Bay of Quinte finals. That hasn’t happened for us before,” said Davies. “I thought we worked hard and tried our best. We have to keep working in the next couple of years and hopefully we can beat them.”

Davies said the Titans had a number of talented players and worked really hard too. She also credited her own team for their season, adding: “It was a very good group of girls, no drama or anything.”

Snider said playing in the big game was “an honour,” something the Panthers worked hard to get to. She was pleased with the way her team beat the press in order to score.

Thursday, the Panthers will travel to the Kawartha region as the top ‘AA’ seed from the Quinte area for COSSA competition with St. Theresa picking the ‘AAA’ route and home-court advantage. The Panthers will open with a semifinal against Cobourg St. Mary’s at 11:30 a.m at Holy Cross Secondary School.

De Boef says if the Panthers can look forward and not dwell on Friday’s loss, they’ll be in good stead to compete.

“We already beat one of the top teams in Peterborough, so I definitely think we have a fighting chance at COSSA,” she said. “If we can pull out a win and have some really good games to finish off our season, that’s what we’re hoping for. We just have to keep moving forward.”

Garden said the Panthers have come a long way from the days where they travelled to COSSA as a lower seed and lost their first game regularly. He credits local elementary schools and the County Clippers for their efforts in developing players who are already effective when they reach PECI.