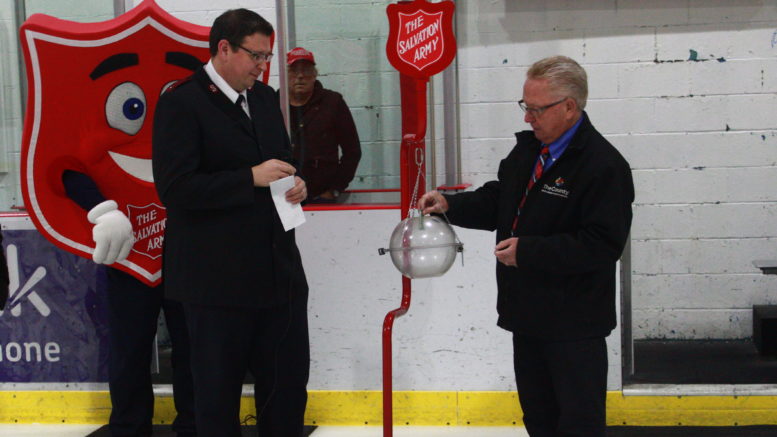 With the holidays on the way, a local organization is once again hoping to raise funds to assist those in need.

The Salvation Army launched their 2017 Christmas Kettle Campaign prior to the Picton Pirates’ Nov. 16 tilt versus the Napanee Raiders. Mayor Robert Quaiff was on hand for the launch, making the first official donation of the local campaign with Salvation Army Lieutenant Joe Ludlow announcing the campaign’s formal kick-off.

The Christmas Kettle Campaign runs until Dec. 23 and includes six kettles located in stores around Picton. Last year, the campaign began with a goal of $37,500, ultimately far surpassing that goal by bringing in $49,500 for local programs and services. This year’s campaign raises the bar with a goal of $50,000.

Ludlow thanked the community for their support.

“We are so grateful for this very generous community who helps us to assist our neighbours in need,” he said. “Thank you to our volunteers who help us make this campaign possible.”

Money raised during the campaign stays in the community, supporting vital programs serving those in need. Money raised through the Christmas Kettle Program assists people with food, housing, clothing and financial support to cover the cost of essential utilities. The program assists an average of 120 people every month, amounting to about 50 households. Last Christmas, the local campaign provided 86 food hampers and 58 toy hampers.

The Salvation Army is hoping the community will be generous once again and are seeking Christmas Kettle Volunteers. The organization needs to fill 1,400 volunteer hours to make the campaign possible. Those interested in becoming a Christmas Kettle volunteer can register by visiting the Picton Salvation Army office at 46 Elizabeth St. between 9 a.m. and 12 p.m., or call 613-476-3159.

The Salvation Army is an international faith-based organization that began working in Canada in 1882. It has grown to become the largest non-governmental direct provider of social services in the country. The organization operates in 400 communities in Canada and 128 countries around the world, offering assistance for children and families — often providing basic necessities of life — shelter for homeless people, and rehabilitation for those struggling with addiction.