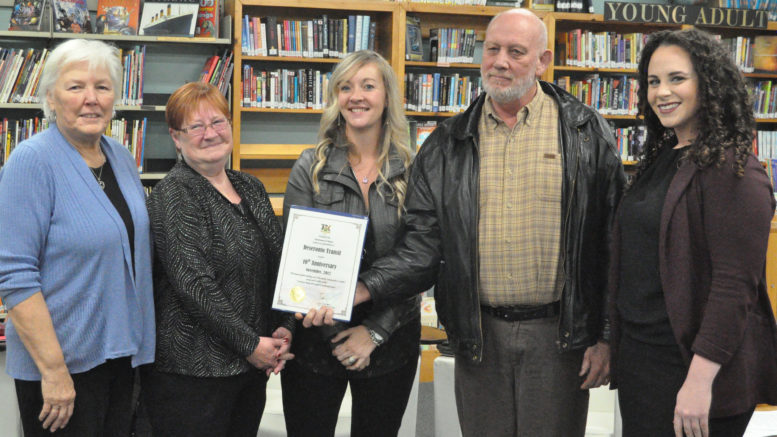 Conventional thinking wouldn’t place a transit system in a town of fewer than 2,000 people.

In Deseronto, however, a small group didn’t let naysayers or skeptics get in the way of a dream to enhance transportation services for residents. On Monday, those key players gathered at the town’s library to celebrate a decade of Deseronto Transit, a service that has grown to serve five municipalities and accommodate over 13,000 trips a year. 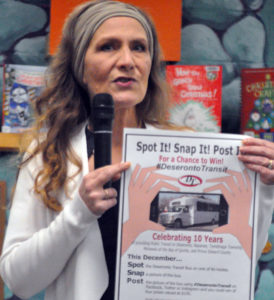 Mayor Norm Clark said while Deseronto Transit has been operational since 2007, the idea actually started in 2007 with Lori Brooks urging municipal candidates to think bigger to solve a problem.

“When she gets something on her mind, she doesn’t let it go. She kept talking about the people who needed jobs in Deseronto and there were few jobs in town at the time. We really needed something to get people to where the work was,” Clark recalled.

Following that election, Brooks, librarian Frances Smith, Jamie Osmond, a social services worker at Hastings County and Clark would meet at the library, sometimes until 11 or 12 at night to go through logistics and apply for funding in hopes of starting a pilot project. Ultimately, the then-director of social services at Hastings County, Eric Fry, stepped in and provided a necessary go-between to firm up details for Deseronto council to be involved and for the province to play a role.

Ontario’s family and community services ministry was convinced by the presentation and gave $200,000 to hire staff and buy vehicles. Clark recalls hiring Deseronto Transit administrator Susan Stolarchuk and giving her a broad mandate.

“Basically, we said to Susan, you work with Eric and the two of you come up with a transit system for us.”

Stolarchuk went to work building the system, working full days and then approaching funders at night. Clark recalled on top of that, if a driver was sick, she’d also be driving bus at 5 a.m. to make a go of it. Initially, it was looking bleak that the system would go beyond other attempts at rural transit.

“We had rough times in the beginning, really rough times and we wondered whether the transit system was going to stay a reality for Deseronto,” he said. “Susan took the bull by the horns and made it work.”

Organizations like the United Way and the Parrott Foundation became partners, offering capital improvements and operational grants. With Deseronto council recognizing the value, Stolarchuk took her pitch to neighbouring communities. Eventually, Tyendinaga Township, Greater Napanee, the Mohawks of the Bay of Quinte, and Prince Edward County all signed on to allow pick ups and drop offs in their areas. They also offered gas tax support, which allowed Deseronto Transit to expand.

“We had a number of people in the town that tried to get buses and a transit system going in town, but it never lasted. The first thing that went through my mind was ‘How long is this going to last?’ but we supported Deseronto Transit and are helping with gas tax,” he said. “It’s helping our Napanee residents very well and I will say it helps Lennox and Addington County. We hope it lasts another 20 years…”

Hastings County Warden Rodney Cooney congratulated Deseronto for making it work.
“Myself being from a rural community, we don’t have the luxury of jumping on street cars and subways and high-speed trains and all that stuff. Even though sometimes the GTA wants us to pay for their subways, we have to look after ourselves also,” he said. “Deseronto’s transit service fills a gap. They rely on this service to get them to employment, medical equipment, and a host of other important appointments. Giving our rural citizens a way to live in our communities, but connect to larger centres is critical and substantial in making our communities thrive.”

Clark called the service “a blessing” for those using it and, in particular, those seeking work. He relayed one conversation he had that reiterated to him how valuable the service has become. He was talking to a resident on Main Street and conveyed how the man must have been happy to have transit to take him to work. The man replied: “Oh, the transit doesn’t take me to work.” Clark asked if he had lost his job, but he watched as the man smiled and shrugged off the question. He said he not only had a job because of transit, but he was able to buy his own car because of that job.

“In the beginning, that was our big thing — to try to make life better,” he said. “It was to give jobs to people who wanted jobs and to make their lives meaningful. Susan could probably tell you story after story of people who have benefitted from the transit system.”

Scheduled routes include service to Belleville destinations like Loyalist College, the Quinte Mall, ViaRail, and the downtown bus terminal. There are also connections to downtown Napanee, Walmart and NoFrills. The Prince Edward County routes run through Bloomfield and Picton. There’s also flexibility for charters and for individualized pick-up or drop-off locations.

Three years ago, Deseronto Transit received a P.J. Marshall Certificate of Merit from the Association of Municipalities of Ontario for innovation. Going into its second decade, it’s not resting on its laurels. It is working on accessibility with new equipment provided by the Parrott Foundation and a partnership with the Quinte Access transportation system in Quinte West to introduce new accessibility software. The federal government also granted Deseronto Transit $60,000 recently for a new fully accessible bus. It will be active in March.

Stolarchuk said Deseronto Transit will have to continue to think unconventionally in the future.

“Innovation and collaboration will be the key to our success. We know there is more that needs to be accomplished and we believe that working together collaboratively with our stakeholders we can continue to grow with the goal of meeting the transportation needs in our communities.”

At Monday’s celebration, Stolarchuk announced a special campaign to mark the anniversary. Anyone who sees a Deseronto Transit bus on the road from December 1-22 is invited to take a photo and post it on Facebook, Instagram or Twitter with the hashtag #DeserontoTransit for an opportunity to win one of four $100 prizes or a monthly bus pass. The winner will be announced Dec. 23.

“We’re going to use a social media campaign because we thought it would raise awareness of transportation in the area and also involve the community and give them something fun to do.”