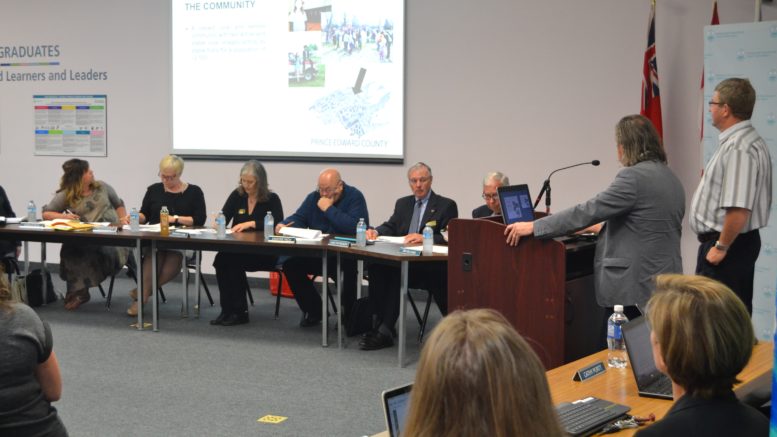 FINISHING IN THE BLACK- Hastings and Prince Edward District School Board Trustees listen to members of the public concerning school closures in Prince Edward County in May, 2017. The school board announced it finished the 2016-17 fiscal year with an unexpected surplus. (Jason Parks/Gazette Staff)

While the belt tightening will continue, the Hastings and Prince Edward District School Board (HPEDSB) has a somewhat rosier outlook in terms of its multi-year financial recovery plan.

The board officially closed the books on the 2016-2017 school year last night at its monthly board meeting with trustee approval of its consolidated financial statements for the previous school year.

The statements reflect the board’s financial results for the 2016-2017 fiscal year.
Based on a Ministry of Education approved multi-year financial recovery plan instituted by the province after the HPSDEB surplus had dipped to dangerously low levels, the board was expected to finish the year with a deficit of $360,137.

However, the audited statements indicate the board actually ended up over $2 million in the black prior to its commitment of $1.9 million to be appropriated for employee future benefits.
For compliance purposes, the board is reporting a surplus of $152,013 to the Ministry of Education.

The cost recovery plan was submitted by the board a year ago and approved by the ministry. The board’s appetite to dip into its accumulated surplus has finally caught up with the public school body.

At the year end of the 2015-2016 school year, the board had reserves of $3.8 million but had to draw down $2.5 million to balance a higher than forecasted budget.

In its 2017-2018 budget submission, the board indicated it would likely consume most of what’s left in its accumulated surplus account and leave just $235,000 available.

In total, six of the last eight years the HPEDSB submitted deficit budgets where they have drawn down on the accumulated surplus so Monday’s report was a welcome sight for senior administration and particularly the board’s superintendent of business services Nick Pfeiffer.
Pfeiffer said two aspects of the board’s transportation operations helped bring the bottom line down in 2016-2017.

“First, the price of fuel was really high last summer and we budgeted based on that price but it actually went down,” Pfeiffer said, “The other aspect that worked well was taking opportunity when we had new schools open like Trent River Public School in Trenton to re -examine the bussing routes and find efficiencies. We are still are transporting students but we are able to take a fresh look and examine the routes and eliminate those that are duplicate or inefficient. Between those two things, we were able to save about $600,000 on our transportation line.”

The board is still wresting with its large “employee future benefits” line or what Pfeiffer called an employment gratuity however that number is slowly falling year after year.

The board has about $16 million in unfunded liability that it owes to its employees when they retire so we are paying that off at about $1.9 million per year. In about eight years we won’t have that line item anymore,” he added.

Based on its 2017-2018 budget submission, the board is expecting to finish the current school year with a scant $3,000 surplus or essentially, a balanced position.