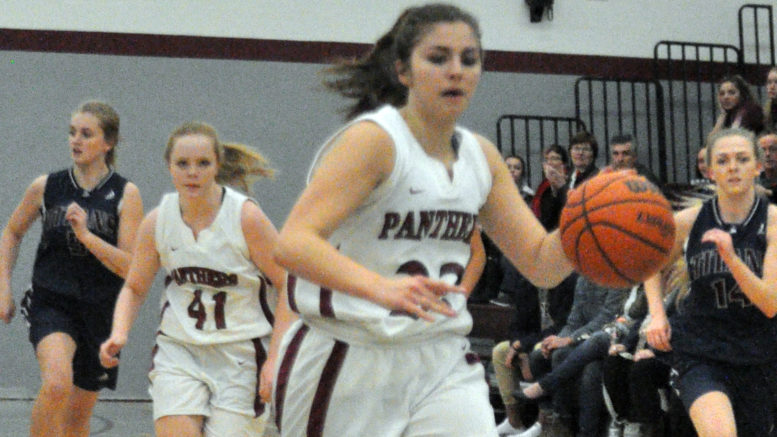 A promising 2017 season ended in disappointment for the PECI Senior Basketball Panthers in Fenelon Falls Thursday as they saw the COSSA championship slip away in the final minute.

Coach Rob Garden said his Panthers were tied 40-40 going into the dying minutes when the hometown Falcons hit a three-point shot from deep in the corner to take a lead. The Panthers couldn’t execute to draw even again.

“We had some good looks to score. We were trying to get a couple points and stop the clock, but we couldn’t get it. Nothing would fall. We had to foul to stop the clock and they hit those free throws.”

Ultimately, the Falcons won 45-50 to earn a trip to the OFSAA ‘AA’ provincial championship in Huntsville this week. Garden said scoring plagued the Panthers when it counted most.
The team went 5-for-18 from the free-throw line. They also struggled to support top scorer Vanessa Willis, who got 25 points herself.

“It was a deflating feeling for these girls. They couldn’t score. They kept missing,” Garden said.

“Our secondary scoring was missing. We were used to getting 6-10 points from somebody else all season. For whatever reason it’s the first game we’ve had that problem all year and we had it at the worst possible time. We didn’t have any support for our best player.”

Jessie Swackhammer was the next highest Panther scorer with five points.

While he credited Fenelon Falls for playing the better 32-minute game, Garden said he felt his team was more talented and had more pieces to utilize. The coach thought his team looked tired after a tight 47-41 win over the Lindsay Spartans that morning.

Garden said he thought the Panthers might have repeated a mistake it made last year coming in as a top seed a bit overconfident and under prepared to face a semifinal opponent.

“Again, maybe we too them a little too lightly and we struggled.We had to work hard to win that first game. They were a tough, physical team and we didn’t shoot the ball well. We battled, we fought through it, and we got the win, which was the most important part.”

With her high school career on the line, Willis delivered again. She scored 20 points and Garden said she took control in the fourth after the Panthers eased off on a double digit lead to allow the Spartans within six points.

“Vanessa had a heck of a day. She was on a mission. She was in full attack mode… She kind of took things into control in that last little bit and got us the victory,” he said. “We lose one of the best players to ever don a Panthers basketball jersey. How do you replace a warrior? She was not going to let that other team beat her or her teammates. You don’t get to coach that stuff and she brought it for five years.”

Thinking back on the day, Garden said he felt the Panthers put themselves in a position to win.
“We drove. We purposely avoided the bus. I thought we did everything right. We just had two back-to-back games when we couldn’t buy a bucket. I really did feel bad for the girls, I thought they deserved a better fate and a better outcome but you have to play the games.”

A bus load of PECI fans also made the two-and-a-half-hour journey to cheer the Panthers on.

The coach said the Panthers were “more upset than I’ve ever seen a team” following the final, adding he thought his players knew they were a better team. He also said they deserved credit for putting effort in to practice on their own often and taking on leadership to affect their own fate.

The Panthers were perfect in sanctioned games through the Bay of Quinte Conference championship heading into the COSSA final and their overall record including tournament play was 18-5.

While Garden wouldn’t say a rebuild is ahead, he acknowledged the seniors will have a younger, different look with the possibility of six juniors who also earned COSSA silver making the transition. The coach is still optimistic even with all the turnover.

“When you look at the quality of player from 1-10 for next year, we’re not going to be hurt when anybody goes on the floor.”