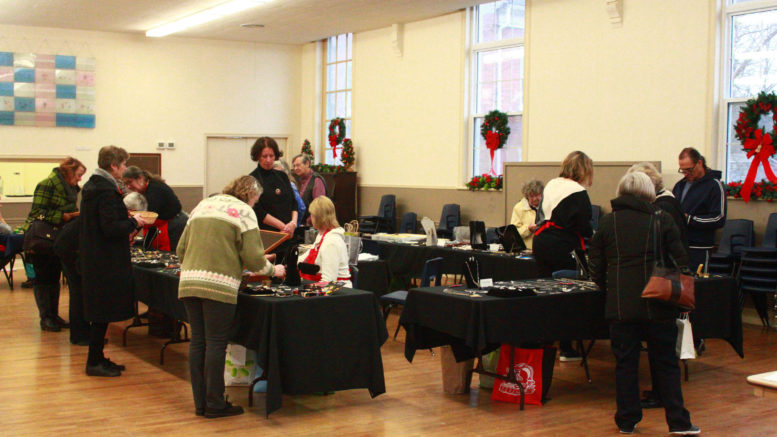 The fifth annual sale ran on Saturday from 9–2 p.m. and at least 100 people had been through the venue by noon, taking with them more than half of all the items available. All proceeds from the sale will go to the Stephen Lewis Foundation’s Grandmothers to Grandmothers Campaign.

This year the sale moved from the Lipson Room above Books & Company to the hall at St. Mary Magdalene Anglican Church. Sale co-ordinator Pia Grayman said she was happy with the response.

“It’s gone really, really well — we have sold a lot,” she said. “Definitely more than half is gone.”

Sale items were donated mostly by members of the public with prices starting as low as 50 cents for a variety of jewelry including pearls, silver, and semiprecious stones.

After four years at its previous home, Grayman said it was good to know the show’s fans were willing to follow it to a new setting.

“We really, really like this venue,” she said. “This is our first time here and this is perfect.”

“They need all the help they can get,” Grayman says.

To date, Canadians have raised more than $24 million for the cause. Those dollars are invested directly at the community level, supporting grassroots organizations that offer things such as food, educational supplies, and medical care to grandmothers and the children in their care.

Grayman said local support for the fundraiser has been encouraging.

“Nobody walks away without having purchased something,” she said.

She said the Grannies for Africa have been supported on many levels, from the members of the public who donated jewelry, to the people who purchase the items.

“We have a team of about 10 people that work together on this,” she said. “Of course, they also come out and buy, so we’re blessed in all ways.”

Annually the group takes some of the jewelry left over after the sale and creates a tree that will be auctioned off at the Festival of Trees fundraiser for the Prince Edward County Memorial Hospital Foundation.

“That’s our way of giving back to the community because they’ve been very generous to us through this sale,” Grayman said.