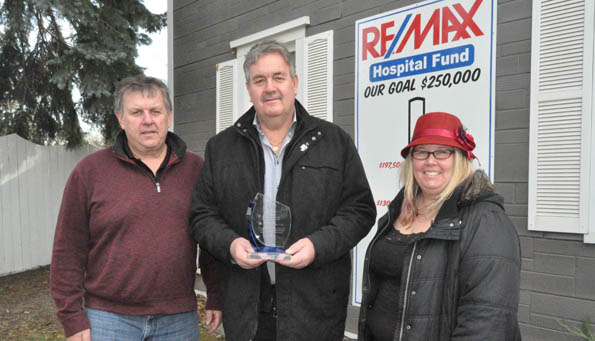 Giving back - Re/Max Quinte associates (from left) Kevin Gale and Herb Pliwischkies show off their National Philanthropy Day Award for corporate giving alongside their nominator Briar Boyce of the Prince Edward County Memorial Hospital Foundation. Re/Max has long supported the hospital and it recently stepped up its effort with the Teeing Off Fore Health Care Golf Classic. (Adam Brambugrer/Gazette staff)

The caring nature of Prince Edward County residents was in the spotlight on a regional level Wednesday in Kingston as part of National Philanthropy Day.

Each year, the Association of Fundraising Professionals South Eastern Ontario Chapter hands out awards in five categories to people who go above and beyond to give within their communities. From an area between Brighton and Brockville, two award winners were from the county — Lanny and Catharine Huff as philanthropists of the year and Re/Max Quinte’s Prince Edward County office as the outstanding corporation with under 99 employees. 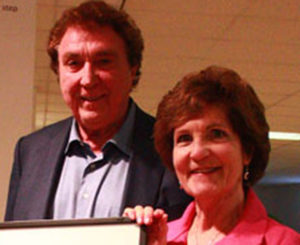 Hospital Foundation nominated Re/Max, which has raised $197,500 for the hospital over the past 17 years, including more than $80,000 through the Teeing Up Fore Health Care golf tournament the past three years. Its goal is to reach the $250,000 mark in giving to the facility.

The realty firm has also been a regular contributor to the County Marathon and many of its associates have their own pet causes to give to within the community.
“Re/Max Quinte representatives continue to set the standard for corporate philanthropy in Prince Edward County,” said Briar Boyce, the foundation’s communications co-ordinator in her nomination. “Each of the 19 representatives give back to our county community in their own individual way, but also as a corporate team.”

In particular, Boyce cited agents Kevin Gale and Herb Pliwischkies, who have been instrumental in growing the golf tournament. She said they have the ability to make an onerous task like raising money fun and they take the stress out of organization.
Gale said the supporting the hospital has been important to him on several levels.

“It’s important to me as an individual and for my family, but it’s also important from a real estate point of view,” he said. “It’s the first thing people ask.”

Pliwischkies continued that prospective buyers want to know about the proximity and the quality of the service. He said Re/Max agents made it a group priority to support it.

“A few years ago when there was a whisper in the community they were going to shut it down, that’s kind of when we started the pledges toward the hospital, maybe eight or nine years ago,” he said. “On that initial drive, we exceeded our targets.”

Three years ago, broker Sean McKinney encouraged agents to start the campaign up again. The agents were enthusiastic and, it turns out, so was the community. Many sponsors have signed on for several years and this year for the first time, the golf sold out too.

“It’s easier than some concepts to promote,” Pliwischkies said. “Everybody needs it and they want to get involved. I don’t think we’ve had many people tell us no.”

Both Gale and Pliwischkies were on at the Renaissance Event Venue to gather the award. It’s a memory they won’t soon forget.

“Seeing the nominees, it was kind of humbling to be recognized with service groups and philanthropists like the Huffs. It was an honour to be in the same room and nominated and even better to win.”

The Huffs were nominated by Loyalist College, where they started an endowment fund in memory of their son Peter in 2008 to provide financial assistance for students at the college. After they made the largest single gift ever to an endowment fund at Loyalist this March, the fund grew to $850,000.

The couple also provided significant support for capital projects at the college over the years and Catharine has served as a director on the Loyalist College Foundation since 2010.

The Huffs have also been very generous in their own Prince Edward County community. They’ve been instrumental funders of most artistic productions, companies and shows in the county and were given special recognition by the Prince Edward County Arts Council earlier this year. They’ve also given for the Wellington and District Community Centre, the hospital, Hospice Prince Edward, and Camp Trillium among other projects. Recently they purchased naming rights for the Huff Estates Arena in Picton to help furnish an electronic sign at the Picton Fairgrounds.

Catharine Huff said both she and her husband were born in the county and after leaving for school, they decided to return because they love the area. That’s part of the reason they look to give back.

“The county and area has been very good to us,” she said. “We feel that it’s something we should do. When there’s a need, we should do something about it.”

Huff said they have really enjoyed seeing the county change since they opened plastics businesses in Belleville and Quinte West in the late 1970s through the opening their winery in 2004 to the present day.

“It’s a wonderful place to live and it’s so nice to see the growth in culture and the arts, sports, and cuisine. It’s really lovely to see that and to be able to help with it.”
Huff called the awards ceremony “a lovely” evening. Many of her family members were in attendance for the presentation.