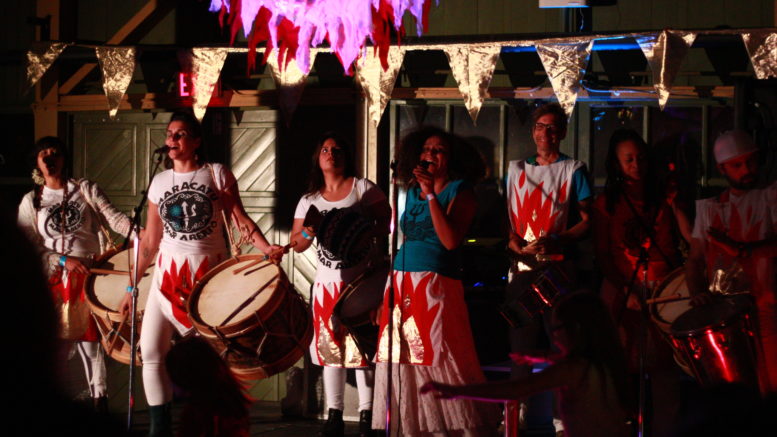 Rain didn’t spoil the party as the Firelight Lantern Festival welcomed its biggest crowd yet to the Crystal Palace on Saturday.

The annual parade from Benson Park to the Picton fairgrounds had to be cancelled this year due to a downpour, but event organizer Krista Dalby said that didn’t stop more than 600 people from packing the Crystal Palace to take part in the festivities.

“It was a huge success,” she said. “We had 640 people come, which is definitely our biggest crowd so far.”

Dalby said while it’s a great spectacle, there was no worry on her part that losing the parade would affect the overall success of the event.

“This year we had so much to offer inside the Crystal Palace with the scale of the installations we had, so I knew everything was going to be just fine,” she said.

There was a great response from members of the public. Many danced while checking out installations, while others compared lantern designs and costumes, and others simply basked in the whimsical nature of the event.

“That’s one of the things that motivates us to do this is getting those reactions from people,” said Dalby. “A lot of people tell us it’s their favourite event in the county — somebody actually told me this year it was one of the reasons they moved to the area.”

She said its always flattering and heartwarming to get that type of response. That’s especially so considering the time and effort that’s put into each aspect of the event. Hundreds of hours went into crafting displays, each showcasing a different aspect of the event’s Fire and Ice theme.

Chrissy Poitras and Kyle Topping of Spark Box Studio collaborated with Toronto artist Jennie Suddick to create one of the major displays.

“That was just absolutely countless hours,” Dalby said. “They prepared everything in advance and then we had a crew of volunteers who showed up to help install all of that.”

Dalby and local artist Nell Casson collaborated on another work they dubbed “The Fire of Conspicuous Consumption” that was crafted from all manner of red and yellow items, and Kingston artist Don Maynard contributed a video installation.

“It’s just a massively collaborative effort between lots of people and it really works,” she said. “We try to reinvent some aspects of the festival every year, we do not want to become predictable.”

Visitors crowded around the stage to watch musical guest Maracatu Mar Aberto. Dalby said judging by the audience reaction, the band could have kept on playing for another hour at least.

“People were really, really getting into it,” she said. “There was lots of dancing going on and some really beautiful moments on the dance floor.”