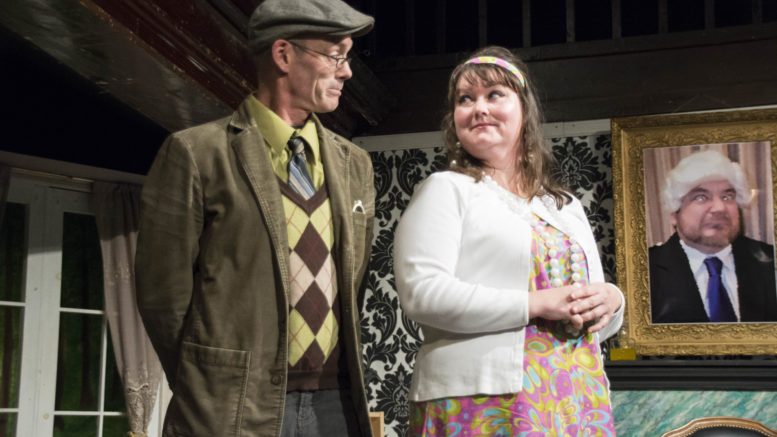 TOMB TIME- Perry Potter (Pat Larkin) and Freda Mountjoy (Becky Mulridge) might know something the Tomb family doesn't in A Tomb with a View presented by the Marysburgh Mummers this weekend at Mount Tabor Playhouse in Milford. (Rod Doucet for the Gazette)

A nice cross section of Prince Edward County’s best thespians combine at Mt. Tabor playhouse this weekend for the close of Norman Robbin’s A Tomb with a View presented by the Marysburgh Mummers.

The production is the first in a trilogy penned by Robbins based around the eccentric Tomb family and their strange collection of hanger-on type friends.
The patriarch of the Tomb family has just died and everyone is gathering for the will reading.

A mysterious stranger joins the family of screwballs only to find the large estate has gone missing.

The game is quickly afoot to find the money and see which family member is willing to kill to get it.

Kyle Watson directs and performs in the comedic thriller that’s heavy on the comedy while light on the thrilling aspect and he explained Tomb is a production he’s been eyeing for a while.

“Norman Robbins is a playwright I’ve been familiar with for sometime and I first read the play about 10 years ago,” Watson told the Gazette. “Producers Lori Farrington and Jenn Sills and I kept talking about this getting this play on the stage at Mount Tabor for a while but things kept coming up.”

Eventually, the stars aligned and that might be more of a description on casting than actually producing the three-act play.

The 10-person cast includes some notable heavyweights as well as some relative newcomers to the Mt. Tabor stage that can display acting chops to more than keep up with the veterans of the boards.

The cast combines to breathe life into the twisty and hilarious who-dun-it.

“I’ve always liked the Robbins style in that his plays are silly and quite funny,’ Watson explained. “I also like the idea of a trilogy of plays and I’d like to try and do it with the same cast of actors with each show. If we get enough positive feedback and it ends up being commercially successful for the Mummers, it’s certainly something we would like to pursue.”

With a highly talented collection of experienced actors leading the way, Watson said this cast was easy to work with.

“They are all so talented. Having experience with most them, when I approached them with a role they were pretty quick to say yes and that’s a good sign that they trust your work and ability,” Watson said. “With a cast as talented as this, you can let them know where you want them to enter, where to exit and basically let them know what the overall vision is. They can pretty much play with the rest of it.”

A Tomb with a View shows at Mt. Tabor Playhouse in Milford on Thursday, Friday and Saturday nights. Curtain is at 7:30 p.m.