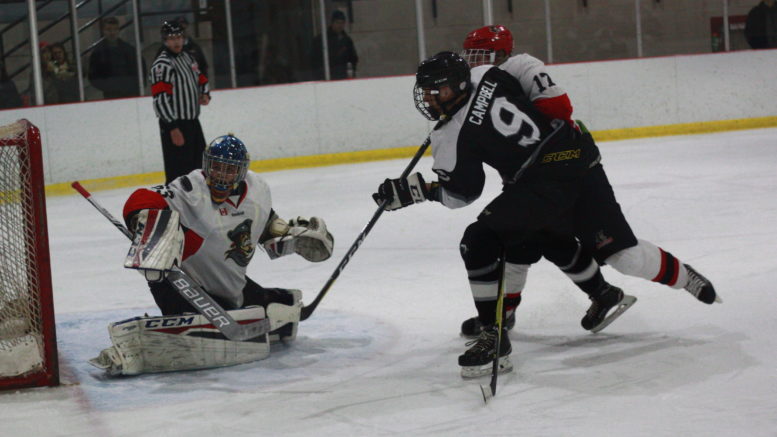 Picton goalie Aaron Young gets his arm on a shot from Napanee's Jake Campbell during the second period of last Thursday's 5–4 win. (Chad Ibbotson/Gazette staff)

It was another week of up and down results for the Picton Pirates.

The club came away with a huge 5–4 overtime victory against the first-place Napanee Raiders on Thursday, only to fall 4–0 to the fourth-place Amherstview Jets on Sunday evening.

The Pirates now sit in third place in the Tod Division, three points back of the Port Hope Panthers and four points ahead of the Jets who have two games in hand.

Pirates coach Tyler Green said the team brought everything they had to the ice on Thursday, but unfortunately weren’t able to carry the same mentality into Sunday’s contest.

Sunday’s game was a little different, he said.

“Amherstview is a hardworking group and they gave everything it took out on that ice and we didn’t,” Green said.

The Pirates came into Thursday’s contest with a lot of jump and it showed early on. While both teams traded chances, the Pirates were able to keep Napanee to the outside for the most part while generating possession time in the Raiders’ zone. It wasn’t until the 18:37 mark of the first that either team was able to capitalize.

The goal came off the stick of Griffen Conger, who picked up a bouncing puck off the boards and danced in alone, beating Picton’s Aaron Young with a blocker side shot to put the Raiders in front.

Napanee carried the one-goal lead into the second period while Picton held an 11–8 shot advantage after one.

The Pirates continued to work when the second frame got underway. Conger was called for charging, sending Picton to the power play. Picton capitalized when a point shot rattled around in front of Raiders goaltender Nicholas Nabuurs, bouncing off a pad and onto Jordon Cannons’ stick. The goal came just 1:17 into the second period. Nick Hoey and Justin Arnold assisted on the play.

The elation was short-lived. Just over a minute later Riley Steeves took advantage of a fallen Picton defender, parking himself in front of Young and tapping in a pass from Austin Labelle. Steeves struck again just 26 seconds later, banging in a cross-crease pass from Labelle.

It appeared the floodgates had opened, but the Pirates buckled down defensively and kept the game at 3–1 through two. Napanee led with 17 shots to Picton’s 13 in the frame.

Green said the team was able to regroup and refocus.

“They stayed determined,” he said.

Entering the third period down by a pair of goals, Green said the team stayed confident and continued to work hard.

“They went back to basics, stopped trying to do the tough things, they played a simple game, and got back into keeping pucks deep and back into an aggressive forecheck,” he said. “Then all of sudden the bounces started going our way.”

The Pirates got some life 5:22 into the third with Cannons scoring on a play from Chase Burden. A Zach Knapp-Hermer goal restored the two-goal Napanee lead just over two minutes later, but this time the Pirates didn’t let up.

Noah Brant scored a power-play goal from Bailey Matthews and Devin Morrison at 11:02 to make it 4–3. At 16:45, Matthew Scott took a pass from Justin Arnold and buried a shot behind Nabuurs to even the score.

Neither team was able to score in the remainder of the frame and the game headed to overtime.

Just 34 seconds into extra time, Morrison scored on a play from Nick Kyte to secure the victory.

Green said the comeback effort offered a confidence boost for the team.

“After beating Napanee we know we beat any team in the league now,” he said.

It was a tough result for the Pirates in Amherstview. Despite creating a lot of chances, the Picton shooters just weren’t able to capitalize. Green said many of the Pirates shots came from the outside and the team wasn’t making it difficult for the Amherstview netminder.

“We didn’t have a lot of guys going to the dirty areas and we were losing a lot of the battles in front of the net,” he said.

Ty Norman scored the opening goal 7:37 into the first period. The teams continued to trade chances through the frame, but the score would remain 1–0 after 20 minutes. The Pirates held a slim 17–16 shot advantage in the period.

Jag Masters made it 2–0 1:33 into the second period and Wyatt Crampton deepened Picton’s deficit with another tally 4:57 into the period. The Pirates again got their chances, but couldn’t find an answer to Jets goaltender Keegan Paulette. Picton led 13–10 in shots in the middle frame, but entered the third down by three.

Aiden Harris would score the lone goal of the final frame to bring the score to 4–0. Paulette stopped all 37 shots he faced in the victory

“The goalie played one heck of a game, that’s for sure, but the problem was we had no traffic — he saw every single shot coming into him,” said Green. “Any kind of second or third opportunities we could have, we just weren’t finding them.”

The Pirates will hit the midway point of the season this week with games versus Gananoque tonight and Port Hope on Saturday evening. Puck drop for both contests is 7:30 p.m.

Green said Gananoque is a hardworking team while Port Hope is always strong in their own barn and the Pirates will have to bring a strong game on both nights to be successful.