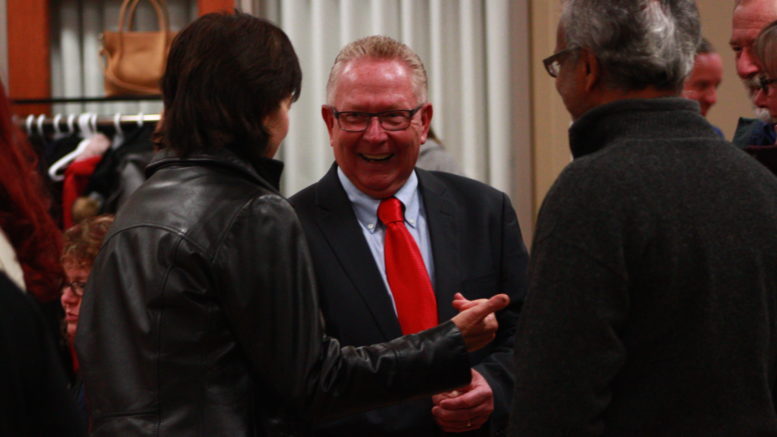 Mayor Robert Quaiff is hoping to bring his sensibilities to Queen’s Park.

Quaiff was officially named the Ontario Liberal candidate for the Bay of Quinte riding in the upcoming provincial election during a nomination ceremony in Wellington on Saturday.

Since word of his nomination got out, Quaiff said there’s been one burning question on the lips of constituents: Why Liberal? He said many are quick to point out his opposition to the Green Energy Act and often ask what has changed.

“Nothing has changed, the Liberals know they’re getting a strong advocate for their community and it doesn’t change,” he told those gathered to watch the nomination ceremony. “I will work on your behalf to get what you want, it’s as simple as that.”

He said he would bring passion to the role of MPP and hopes to be the one to represent the region.

“I’m going to work as hard as any candidate as you have ever known in the Bay of Quinte,” he said. “I love this region, I was born and raised here.”

Quaiff said Liberal policies such as creating 100,000 new childcare spaces, free tuition for post-secondary students, free prescription drugs for those under 25, and $15 minimum wage have led to his appreciation for the party.

“With all of that in mind, why not work with the party that likes to look at providing solutions to problems,” he said.

It was back in the 1960s when his father was a councillor for North Marysburgh that Quaiff got his first taste of politics. He ran for the first time himself in 1998, but was unsuccessful. In 2000, his second bid to represent North Marysburgh was a success. After serving the term, he decided to focus on his new career as a financial advisor for SunLife. He came back to Shire Hall again in 2010 as North Marysburgh’s representative, building a reputation as a staunch critic of the Green Energy Act, and in 2014 was elected mayor.

He said it’s been extremely rewarding to hold the mayor’s position. In the role he’s been able to meet with fellow mayors, speak with provincial and federal representatives, and work with ministers. He said in each case it was clear there are common goals.

“We have the same common problems and it’s infrastructure and it’s homelessness and it’s affordable housing and it’s healthcare,” he said.

“It’s important for a riding like Bay of Quinte to have someone who can work with the government, but also be tough on government when he has to be and that’s the record he’s shown,” he said. “We will not be underrepresented in any way by Robert and this is a great opportunity for us to win back this riding.”

Bay of Quinte MP Neil Elli first got to know Quaiff during the 2014 municipal election campaign and later working with the mayor as MP. He said he was stuck by Quaiff’s organization and passion.

“He’s not afraid to phone me about anything, he really is passionate in the mayor’s role and this is the next step for him,” said Ellis. “…It’s not about partisan government, it’s about the person who’s running and it’s about a candidate that I know will work hard, a candidate who listens, and a candidate who will bring back the riding’s issues to Queen’s Park.”

Once the campaign period begins on May 10 next year, Quaiff has indicated he will take a leave of absence from the mayor’s position and will be appointing an acting mayor to fill the role. If successful in his run for provincial office, Quaiff said he will resign as mayor and council will have to decide who will hold the seat leading up to the October 2018 municipal election.