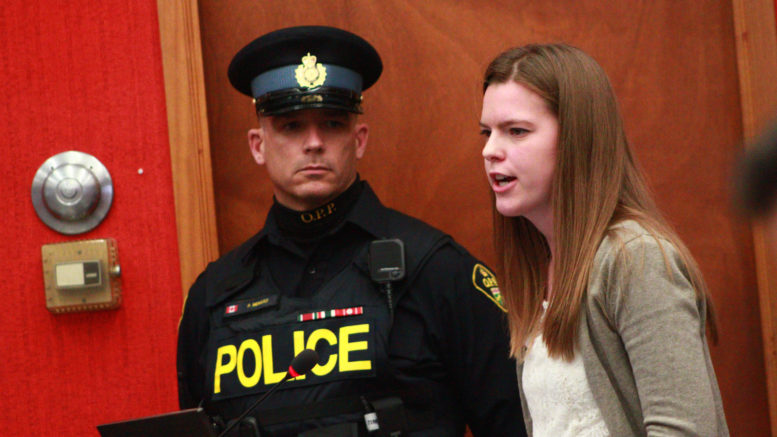 Those behind Farm 911: The Emily Project are hoping the tragic story that spurred its creation can serve as the inspiration behind a concerted effort to ensure a similar incident doesn’t happen again.

The project is named for Emily Trudeau, a seven-year-old who died in a farming accident in Hastings County in 2014. Since the accident occurred in a field without a marked 911 address, first responders weren’t able to quickly find the location. The project was founded last year when Trudeau’s parents, Scott and Angela, voiced an idea for a project that would see 911 signs installed at all farm entrances.

“The gap in the response to that accident was the reason this project came into being,” Walt said.

Local fire chiefs and other first responders have spoken in favour of the project’s efforts.

When the system was first introduced, the signs were only placed near buildings and residences with the idea that they would be where emergency calls would be coming from, Walt said. She said farms are getting bigger and, with cell phones adding a new wrinkle to emergency response, it’s critical for farms to have 911 numbers in place.

“It is becoming increasingly apparent that 911 numbers have many purposes and we believe the fundamental purpose is farm safety,” she said.

Since there’s already a process in place for obtaining the signs, much of the project’s efforts are concentrated on awareness, working with municipalities and encouraging those living in rural areas to ensure their properties are clearly marked.

For now, the project is focused on Hastings, Lennox and Addington, Prince Edward, and Northumberland counties.

“We believe 911 signs are simply a factor of an application and implementation and we believe municipalities already have the capacity to do this project,” said Walt.

She said the project has reached out to each of the four counties and has presented to the Eastern Ontario Wardens’ Caucus. To this point, it has received a lot of support.

The project officially launched in August at the Hastings County Ploughing Match and Farm Show. Northumberland County has already dedicated funds and a committee to ensure the process is streamlined for its seven municipalities.

“The momentum from this project over the last 12 months has been amazing, it’s been contagious with neighbouring municipalities,” Walt said.

Prince Edward OPP community safety officer Const. Patrick Menard reiterated the importance of communicating a precise 911 location. He said the OPP communications centre is based in Smiths Falls. When a resident places a 911 call, it’s received and Smiths Falls and then relayed to local officers.

“We will receive a civic address of where we’re supposed to be dispatched to and that just shows the importance,” he said. “Smiths Falls needs the number to be able to get us on the road as quickly as possible.”

Chief administrative officer James Hepburn said staff will be including an item related to Farm 911 in the 2018 budget package for council’s discussion.

In the meantime, engineering, development and works commissioner Robert McAuley said any resident can request and purchase a sign at any time. He said the signs are routinely issued as part of building permits and the municipality has begun a process to include 911 signs as a condition of severance for both the retained and severed lot.

“The next step would be for the County to decide how to sign all other properties that aren’t otherwise captured,” he said. “If council is prepared to approve the funding to acquire the hardware and authorize the installation, we would install them on every other property that’s not otherwise captured — that’s the scope of the budget item coming forward.”

Budget talks are set to begin the first week of December.

Farm 911 lists among their objectives the creation of a unified system for acquiring 911 signs across all four counties. They’re seeking to persuade municipalities to offer the signs as a service to the community, encourage rural landowners to use the service, and establish a partnership with local agribusinesses who will support the program. The project is also working to develop resources to teach property owners how to contact emergency services efficiently and are promoting the program through digital, print, and social media.