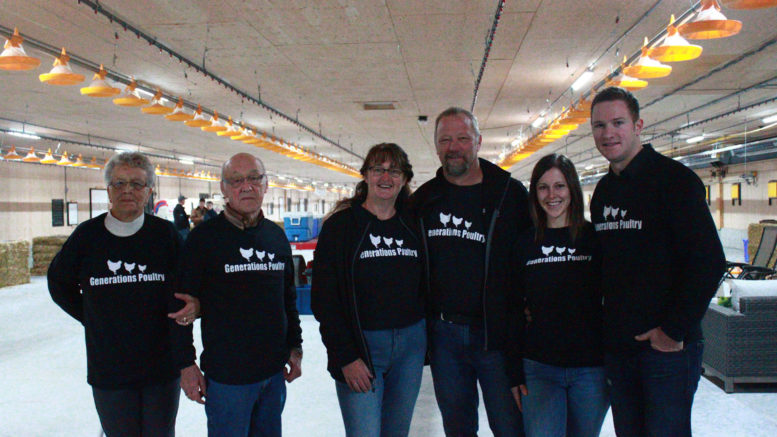 Pennings family has raised chickens in county since 1972

The Pennings family has deep roots in Prince Edward County’s agricultural sector and this week they strengthened those roots with the opening of a new state-of-the-art facility.

Bert Pennings got his start in the Prince Edward County poultry business back in 1972 and his son, Larry, followed him into the sector. On Saturday, Jordan Pennings became the third generation to enter the business with the opening of a new 26,000-square-foot barn under the moniker Generations Poultry.

“We’re buying into the business, they gave us the opportunity to do that and it worked out that it was a good time to start a new build as well,” Jordan says.

He’s expecting the building will have its first chicks — about 27,000 of them — in place by Dec. 12. The facility will host broiler chickens, which are bred and raised specifically for meat production, and will supply Maple Lodge Farms.

While it was sparse during Saturday’s open house, by mid-December the building will be teeming with young chicks spread across the floor on beds of straw. The facility is almost fully automated, with feeding, water, and temperature controls on hand at all times through the use of a tablet.

“All the utility lines — the water lines, the feed lines — they all come down and basically everything is controlled automatically from the feed to the ventilation system, the heat system, daily weight measurements — even the lighting,” Jordan says. “Everything is controlled by computer and it’s also remote — if we’re in town and something goes wrong it will notify us.”

Larry says the system means a better environment for the animals.

“In the heat, we can change the air in here in 45 seconds, a complete air change,” he says. “It’s all back-up generator powered, alarmed.”

He said the facility is all about setting up the next generation of Pennings farmers.

Jordan says his family worked hard to give he and his siblings the opportunity to get their start in the business and that means a lot. He said pretty much as soon as he could walk he would go into the barns and check out the baby chicks.

“Some family generations will have the farm and some of them will be selling out and getting out of it once they retire, but we were given the opportunity,” he says “It’s a blessing, we say it’s a definite blessing to be involved as the third generation.”

Another, he said, was to attempt to shed some light in what happens behind the scenes.

The large facility is somewhat inconspicuous nestled along Smokes Point Road near Carrying Place. Many might not even know it’s there, let alone what’s inside, Jordan says. Due to biosecurity considerations, the facility isn’t accessible to the average person.

Jordan says he hopes the open house gave people some more insight in that regard.