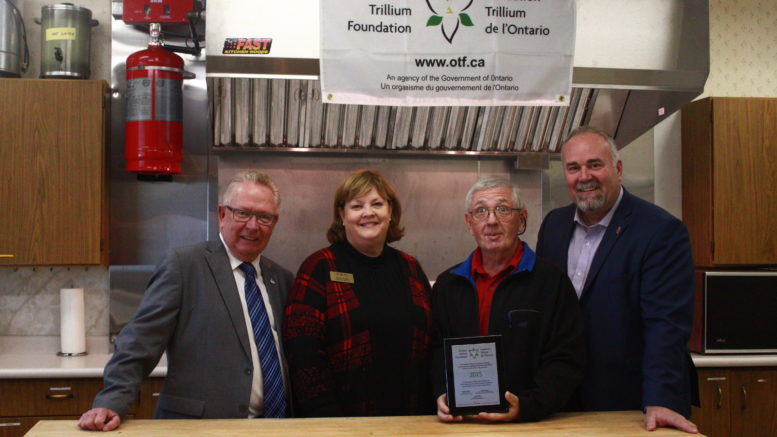 The Prince Edward Curling Club celebrated the completion of a significant upgrade to the facility’s kitchen last week.

The club received a $15,000-grant from the Ontario Trillium Foundation (OTF) to install a new range hood in the building’s kitchen and last Friday the club gathered to celebrate the completion of that project.

As well as ventilating the kitchen, the new six-foot range hood has an automatic fire suppression system with a power cutoff should a fire occur on the stoves or in the exhaust. The OTF grant was awarded to the club in June 2014 with club member Richard Linnett serving as the organizer for the range hood project.
Prince Edward Curling Club president Ron Stakes thanked Linnett for his work and the OTF for their support.

“This was a long project, grants take a lot of work,” he said. “There are a lot of numbers and you really have to take your time because, when the grant review team goes through, you want it to be crystal clear what exactly you’re applying for.”

Stakes said the grant allowed the club to complete the important upgrade to the kitchen.

“This project improves the safety of the cooking facilities not only for the curling club members, but also for the many groups and associations that use the building every year,” he said.

OTF grant review committee member Nancy Parks was on hand to present the club with a plaque recognizing the grant. She said when the review committee awards a grant, there’s a lot of focus put on what impact the project will have going forward.

“At OTF we’re focused on helping organizations built healthier and more vibrant communities,” Parks said. “When we received your grant request back in March 2014, our grant review team could see the benefit of installing a new kitchen range hood, a fire suppression system that meets the current building codes, as well as a monitored fire alarm system for the building.”

She said the improvements have enhanced the safety of the building for curling club members and all who use the facility.

“In strengthening the physical and mental health of its citizens through sports, social, and recreational activities, the Prince Edward Curling Club strengthens the entire community and sets a stellar example for other communities in Ontario,” said Parks.

She thanked the volunteers for the time and energy they spent in securing the grant and completing the project, saying the OTF is proud to be able to invest in the club.

“We want to make sure our communities are active, vibrant places — not just for the physical aspect, but for the social aspect of it as well,” he said. “We want to create these places where our community can come together, enjoy each other’s company, have a few laughs, and slide a few rocks.”

He said it’s often difficult for clubs to financially keep up with necessary upgrades and renovations, but the OTF has helped ensure the club can continue to be an important community space. He congratulated Linnett and the entire club for their efforts.

“It’s been a long road to get to where we are today with this curling arena,” he said. “It’s nice to see the curling club be successful in receiving some grants and it’s nice to see the dedication and hard work the volunteers, the players, and everyone else do.”

The Prince Edward Curling Club is an accessible facility and hosts a number of introductory programs, structured leagues, bonspiels, and elementary and secondary school programs. In the offseason, the building is used by many festivals and shows including the annual Women’s Institute craft show, the Picton Fair, and the Great Canadian Cheese Festival.