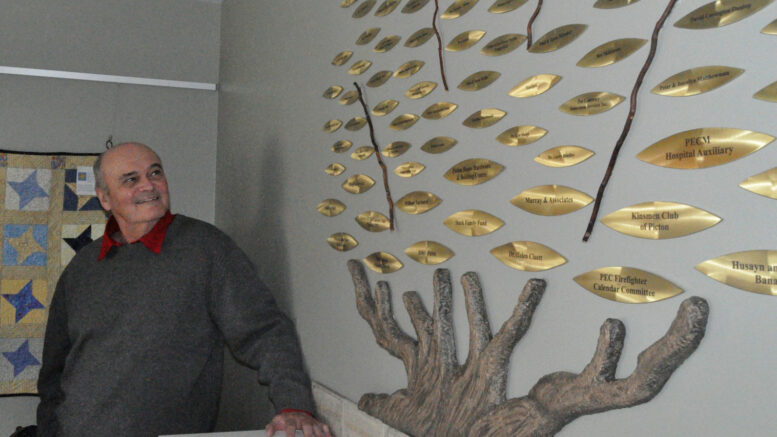 The many people who contributed financially to allow Hospice Prince Edward to become rooted in the community will now be remembered in perpetuity on an ornamental tree inside the Downes Avenue residential care centre.

Located prominently in the living room, the tree features a base with seven blocks depicting names of individuals and organizations that gave substantial funds to make the residential hospice possible.

Above the foundation blocks and a tree trunk designed by former residential manager Esther Howard are a series of brass leaves designed by artist Glen Wallis. The larger leaves near the bottom of the tree recognize donations from $5,000 and up and the smaller leaves at the top represent donations ranging from $1,000 to $4,999. Argyll Engraving has been involved in engraving the leaves and blocks.

Hospice executive director Karen Moore credited Howard for being a driving force creatively to pulling the project together for it installation, which took place about a month ago.

“She’s quite a talented person on the creative end of things and she helped to put that together,” Moore said. “It’s an opportunity — probably long overdue — to recognize the people that made hospice possible.”

Moore said she believes there are now 87 leaves on the tree in addition to the foundation blocks. She said there will be an upcoming recognition event to honour those people who have contributed.

Naturally, Hospice would love to see the tree branch out with more major donors on the wall.

“We hope that tree grows,” Moore said, adding people can donate at any time.

Meanwhile, Hospice Prince Edward has been busy on the fundraising front. Last month, Kevin and Penny Gale hosted a well-attended gala at the Regent Theatre featuring Amherst Island comedienne Deb Kimmett, who shared a show based on her own experiences on her brother’s palliative journey. Donations and ticket sales related to the evening raised over $9,000, surpassing an $8,500 goal to put a new roof on the residential hospice centre. A week later, Earl Colton of Earl’s R and R — Renovation and Restoration was completing the job.

“It looks good,” Hospice board chair Peter Matthewman said. “I can’t say enough about (Gale) and the support he provided for that roof. It’s something we desperately needed, we were literally getting drips of water coming through the ceiling. It’s an indication of how one sponsor from the community really helped us.”

This weekend, Hospice will try to spread word of its palliative care and bereavement services in the community by participating in the Bloomfield and Picton Santa Claus parades and the Prince Edward County Memorial Hospital Auxiliary’s Festival of Trees at Isaiah Tubbs Resort. It’s also partnered to host a pancake breakfast at the Prince Edward Yacht Club Sunday from 9 a.m. to noon. Mayor Robert Quaiff will be one of the cooks. Tickets will be $10 for adults, and $5 for children 12 and younger.

Next Friday, Hospice also hopes to reach a different demographic. Through conversations at Pumpkinfest, the organization has partnered with the Wellington Dukes. Those buying $12 tickets for the Dukes’ Dec. 1 home game against Whitby from Hospice or from its volunteers will see $5 from that  ticket price go to help Hospice programming.

Efforts continue to reach out to the entire county through support programming reaching the Wellington and Ameliasburgh areas and Hospice is also planning a special holiday treat for its bereavement clients next month.

The organization is also preparing to send out a year-end appeal to its supporters.
Matthewman said everyone at Hospice has been working really hard to spread the word and reach a greater cross section of the community while finding ways to keep the organization in a good financial position.

“Hopefully all we’ve been doing over the last while fits under those two things: Awareness and viability,” he said.