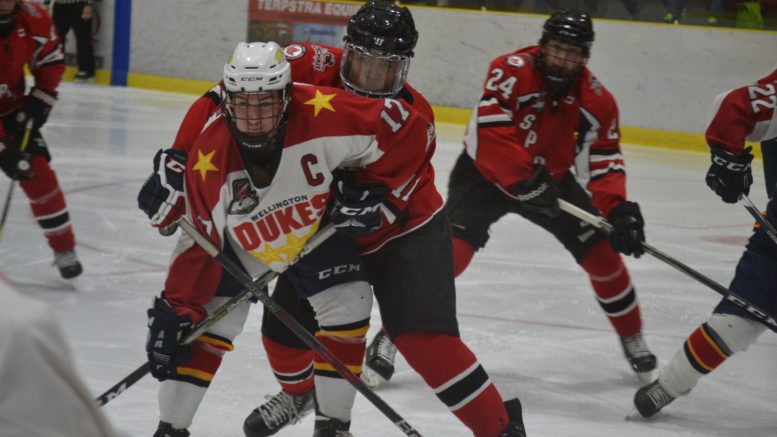 LEADING BY EXAMPLE- Wellington Dukes captain Colin Doyle had a goal and an assist in Saturday's 4-2 win over the Stoufville Spirit. With the win, Wellington pulled into a tie with Oakville for first overall in the Ontario Junior Hockey League. (Jason Parks/Gazette Staff)

As sure as a few snowflakes are the sign of an impending winter, a couple of big road wins are a sign the Wellington Dukes are regaining their form.

Not that the club had completely lost its fine form and not that the local Junior A outfit won’t fall into a funk another time or two this season.

But Friday’s visit to Trenton and Saturday’s journey to Stouffville offered a crucial back-to-back water test for the club that needed to tweak its collective game somewhat during practice last week.

Dating back to a 6-1 mauling at the hands of the host Aurora Tigers Nov. 11, the Dukes seemed to be having issues putting together 60-minute efforts as Wellington looked  pedestrian at times in home wins over St. Mike’s and Cobourg last weekend.

This weekend there were no problems finding the high gear as the Dukes downed the Hawks 6-3 and quelled the Spirit 4-2.

With the wins, Wellington (19-4-7) remains atop of the North-East Conference with 45 points and is tied with the Oakville Blades for first overall in the OJHL.

On Friday, Wellington took to the ice at the Duncan McDonald Memorial Gardens in Trenton for the first time this season.

Current Dukes general manager and associate coach Ryan Woodward said that despite all the earmarks surrounding the game including Trenton’s 5-3 win over Wellington at Essroc Arena in late October, it was more-or-less just another contest for his side.

“I think we were just concerned about our game and how we played and overall, we had a solid road effort,” Woodward told the Gazette. “We had good contributions from up and down the lineup. There weren’t any passengers defensively and we did some real good things on the offensive side of the puck.”

Despite surrendering a goal early to Trenton captain Mac Lewis, Wellington was able to turn the tide at 6:08 as Jackson Arcan collected an Andrew Rinaldi feed and beat Golden Hawks starter Carson Poulin.

Wellington would pick Trenton apart in the second with some highlight reel goals, scoring four times around a second Lewis marker.

Mitchell Martan and Teddy McGeen lit the lamp prior to the halfway point while Arcan and Mason Snell bagged power-play goals in the back half of the frame to make it 6-2 after 40 minutes.

Trenton would draw to within three in the third but Jonah Capriotti made 11 of his 30 stops in the final stanza to preserve the win.

“(Capriotti) was fantastic and made the saves we needed early to allow us to get our feet under us and find our stride,” Woodward added.

On Saturday, Wellington handed the reins to Pierce Nelson who was nearly spot-on through nearly 40 minutes until being being felled near the end of the second when stretching out to make a second effort save while Wellington was killing off a late penalty.

“(Nelson) made some really big saves when called upon,” Woodward said of his netminder. “Taking him out of the game at that point was precautionary and we hope he will be ready by the end of the week.”

For the second straight game, Wellington gave up an early lead as a loose puck in their end turned into a Tyler Kulba goal and a 1-0 Stoufville lead at the four minute mark

Wellington would battle back to control the opening frame and it was Evans making a nice pass from the slot and finding Doyle who snapped home his second of the weekend and tenth of the year at 11:04.

As they did in Trenton just 24 hours earlier, Wellington came alive in the second frame.

Tied 1-1, Mason Snell used hulking Nelson Powers as a screen and snapped the puck past Nathan Torchia at 9:42 of the second to give Wellington a 2-1 lead.

Powers, playing possibly his best game of the season so far, jammed home a rebound at 15:57 for his first Junior A goal and his second point of the weekend after adding a helper in Trenton on Friday.

Wellington then saved their prettiest goal for their last of the night.

Martan, streaking down the near side of the ice, slid a cross ice pass to the far side to the stick of Doyle.

Doyle, with a deft touch, found Arcan at the side of the net alone and only a tap in was needed thanks to the speed at which the play developed.

Stouffville responded with a goal of their won but would come no closer.

After Nelson was lifted, Capriotti was tasked with 11 Spirit volleys in the third and stopped them all.

‘Round the ‘Roc: Wellington hosts Whitby on Friday night and Kingston on Sunday afternoon…The Dukes will be without the services of Evans, Snell and Doyle on Sunday as the trio attends the Team Canada East selection camp in Etobicoke. Team Canada East will be one of two national teams that play in the 2017 World Junior A Challenge in Truro, N.S. next month.