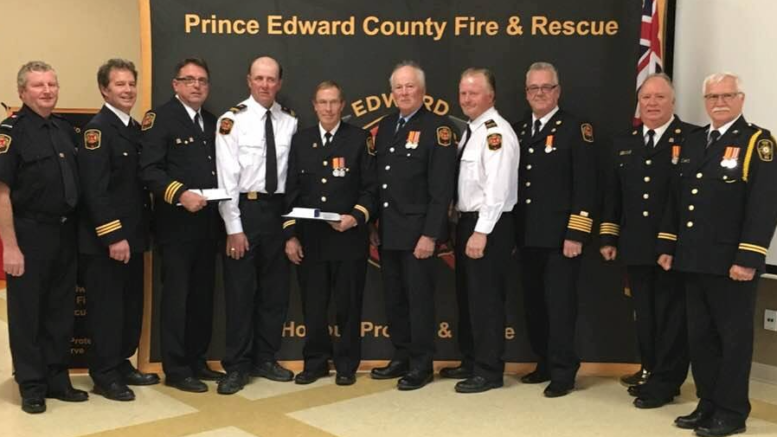 DEDICATED TO THE CAUSE- A number of Prince Edward County Firefighters and First responders were honoured at the Department's Long Service medal ceremony in Wellington Sunday afternoon. (Submitted Photo)

Centuries of local firefighter and first responder experience was on hand at Highline Hall on Sunday as Prince Edward County’s fire and rescue department toasted  its long- serving members.

Those members were honoured with long-service medals and bars for reaching various threshold benchmarks from a decade of service to 45 years of service.

A good crowd of firefighters, their families and representatives from all three branches of government were on hand to pay tribute to those that run to dangerous situations instead of from them.

County fire chief Scott Manlow said it was the many walks of life the County’s firefighters and first responders come from that make the department so unique and Sunday served a rare chance to celebrate the combination of talents and dedication that serve this community well.

“An occasion to come together and celebrate the many, many years of service our employees have contributed to the department was due,” Manlow told the Gazette. “The diversity that they bring to this department is what makes it so wonderful. They are the backbone of our department.”

As is the case with any type of service, for some the spirit is willing but the body is reluctant.

Judging by the program, there are a number of fresh troops heeding the call of fire dispatch and plenty of veterans that are quick to the scene and know every back road and farmer’s lane in their area.

Then there were the long standing veterans like Leonard Bedford, William Bedford, Roger Flower and Robert Tolley that have done and seen it all when it comes to fighting fires or being the first on scene.

“The wealth of knowledge that these guys have is really valuable for our younger guys,” Manlow added. “They are captains and division commanders and we draw on their experience and ingenuity because they’ve been creative with the equipment we’ve had and the tasks we’ve been challenged with. One thing that can’t be measured is the passion they have for department and serving their community.”

Among those honoured Sunday were: