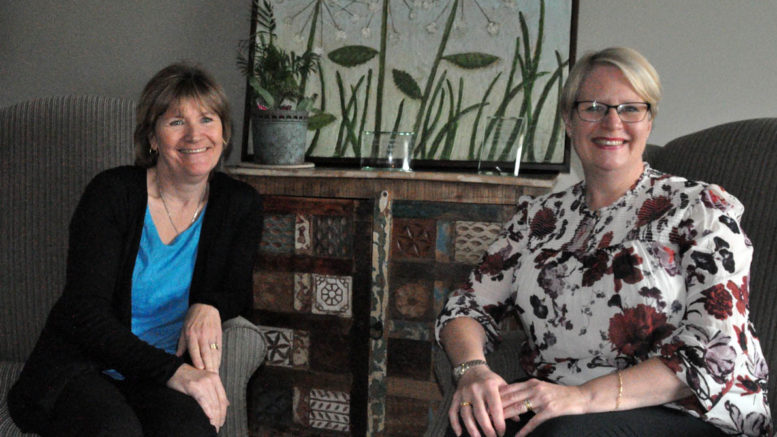 Deb MacDonald, Gillian Chapman on the job since Nov. 7

Deb MacDonald and Gillian Chapman are proof of the impact palliative care can offer.
Both women started working at Hospice Prince Edward this month after being moved to a career in the field through their own life experiences — MacDonald through her work and Chapman through her family.

MacDonald returns to the Downes Avenue residential care centre as its manager after having previously worked there and in the Heart of Hastings Hospice in Madoc as a personal support worker.

“I’ve had quite an extensive range of experiences working hands-on with the residents. I fell in love with hospice and it kind of became my heart,” she said. “I left it for about a year and went back in the community, but I always had that feeling that eventually, eventually the right thing would come along.”

When MacDonald heard about the opportunity to start in Prince Edward, she jumped on it because she values the work that is done at the centre.

“I really believe this is a place where families and their loved ones can have that last chance to connect. They don’t need to be a caregiver any more, they can just be a family and we take care of the other stuff. That journey can be the best it can be,” he said.

The Trenton native believes her experiences as a personal support worker will help her as she learns the administrative side of the home as it will allow her a broad perspective to see all sides of the care model.

Having started Nov. 7, MacDonald has already overseen a couple of patients palliating on site.

Moving forward, she said a goal is to utilize residential volunteers as fully as possible.
“Our volunteers have so much to offer and some of those things we’re not utilizing and tapping into yet. They’re an invaluable resource for us,” she said.

Executive director Karen Moore said MacDonald was an impressive candidate for her position.

“Deb has a great reputation from the time she was here and out in the community and top-of-the-line references. I think everybody was really excited to see her come back,” he said. “It’s great that she has a background as a PSW and I think that’s a real asset for us. She understands what it’s like to be upstairs.”

Chapman had a career in the United Kingdom as a chartered management accountant. She moved to the county in 2005 and had a role as business development manager at the Prince Edward-Lennox and Addington Community Futures Development Corporation, then opened her own business with her husband. Now, she’s the fundraising co-ordinator at Hospice Prince Edward.

Work at hospice wasn’t on her radar until 2012 when she had her own experience with a family member suffering from a life-ending illness. After that, it seemed natural.

“I had a spinster uncle in the U.K. I was his most direct family. I spent five weeks in hospice with my uncle in the U.K. From that experience, I saw the difference that good quality, caring, loving end of life care can make. He had an incredibly peaceful transition, purely due to the care provided to him,” she said, adding she was also impressed with how hospice staff cared for her.

“The quality of care at every level I received there, when I came here I saw that was their focus to look after the entire family group through this time. When this opportunity came I wanted to be able to come here and help keep the doors open of a place that can achieve that.”

Chapman acknowledged that experience will help her sell Hospice Prince Edward to the community.

“It’s all about awareness and relationships. It’s not going out and asking for money, it’s going out and telling people that ‘This is your hospice. We’re here to serve you and this community at a time when you really need love, compassion and some professional support. It’s support that knows how to do it and do it well.'”

On Chapman’s short-term agenda is the year-end community appeal. Longer range goals include planning a gala in February and continuing to raise awareness of Hospice Prince Edward throughout the county.

Moore said she likes the way Chapman approaches her new position and the way the staff is shaping up.

“I think Gillian really hit the nail on the head when she said she had a heart for hospice,” she said. “Take a look at every one of our staff members. They have great experience that backs them up, but they also believe in it. We could take our skill sets anywhere but this is where we want to be.”

In expressing satisfaction with the two new hires and optimism they can help Hospice Prince Edward grow, Moore also said the organization is saddened to see two long-term employees, Judy Fraser and Esther Howard move on from their positions.

“Esther and Judy offered a lot to the organization. They really helped the organization come through some tough times. They’re really to be commended for that. It’s always sad to see people go. They have great skills as well,” she said.