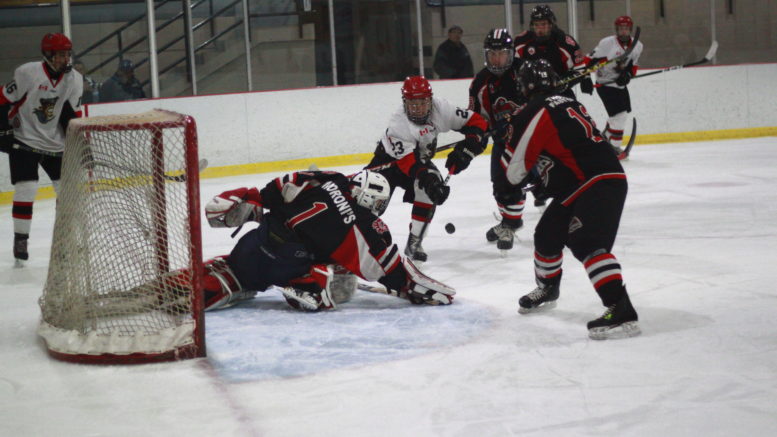 For the third straight week the Pirates have followed up a big win with a lopsided loss.

Picton took a 6–3 win over Gananoque last Thursday only to fall to Port Hope 6–2 on Saturday.

It’s a trend that began Nov. 9 with a 10–2 win over Campbellford. The next night the Pirates fell 5–0 to Napanee. The following week the Pirates got a measure of revenge with a 5–4 overtime victory over the first-place Raiders, but the club was unable to carry the momentum into their next contest, falling 4–0 to Amherstview.

With the team alternating between opponents ahead and behind them in the standings, Pirates coach Tyler Green said the schedule has played a factor over the last few weeks. He said the result has been a few emotional let-downs.

“The biggest thing right now is, we came up with a couple of big wins and then the next couple of games the emotions got back in the way,” he said. “Sometimes it changed the focus of what we’re really going for.”

At the midway point of the season the Pirates sit in third place with a 12-7-1-0 record. Green said he likes where the team is at through 20 games.

“We’ve been challenged and we’ve stepped up to the challenges,” he said. “We’re a hardworking team and it’s going to go the same way through the rest of the season.”

He said he expects the team to continue to be in a standings battle the rest of the season and believes the team is prepared for that challenge.

Green said Gananoque is one team that could surprise opponents down the stretch and reiterated that point to the team prior to Thursday’s contest.

“They’re a team that, if you don’t show up, they’re going to steal the two points from you,” he said. “They’ve had some key additions along the way, so we had to keep the guys mentally prepared for that.”

The Pirates got on the scoresheet first. Will Harrison collected the puck, moved into the slot with a good move, and placed a perfect shot past Islanders goaltender Josh Rowden. Gananoque came storming back and just 33 seconds later Logan Leonard’s blast sailed by Picton goaltender Wes Werner to knot the game at 1–1.

The Pirates continued to hold an advantage in possession. At the 14:53 mark they capitalized when Noah Brant took a pass from Tyson Cassidy and beat Rowden with a quick wrist shot on a solo rush.

The Pirates held a 14–5 advantage in shots in the frame and carried the 2–1 lead into the second.

Picton continued the solid effort with Jordon Cannons extending the lead 5:37 into the middle frame. Devin Morrison and Chase Burden had the assists. Brant tallied his second, from Morrison, midway through the period to make it 4–1. Just over two minutes later Leonard cut the lead to two, but the Islanders weren’t able to close the gap. The Pirates had an 18–10 shot advantage in the frame.

Jaydon Wood scored an unassisted goal 6:20 into the third. Aiden Foley answered for Gananoque midway through the period, but that was all the offense the Islanders would muster. Kelsey Katchuik sealed the Picton win with an empty-net goal with just one second on the clock.

Green said the Pirates matched the Islanders’ effort on Thursday.

“They were willing to show up and work every single shift,” he said.

Unfortunately for Picton, they were on the opposite side of six goals on Saturday. Cameron Harris put the Panthers in front 4:26 into the game with a power-play goal. Port Hope held a healthy shot advantage in the frame, but the Pirates were able to make the most of their chances.

With less than four minutes remaining in the period Morrison scored the tying goal and the Pirates went into the second period on even ground despite being out-shot 20–8.

The Panthers had a good start again in the second with Brad Bollert scoring just two minutes into the period. Justin Arnold answered for Picton, but Evan Foley’s power-play goal at the 11-minute mark restored the Port Hope lead.

The Pirates started the third period down a man and it didn’t take long for the Panthers to capitalize. At the 1:07 mark Kallen McFarland scored on the power play to make it 5–2. McFarland added another at 13:17 to bring the final score to 6–2.

Green said emotions were again a factor.
“We were great five-on-five, the guys kind of let the emotions get the best of them that game,” he said.

He said Port Hope’s power play has been good all season and Picton simply surrendered too many opportunities.

The Pirates have just one game this week. They’ll take on the Amherstview Jets tonight at 7:30.

With the Jets sitting four points back, Thursday’s contest will be an important one.

“Every game against Amherstview this season is pretty much playoff hockey,” said Green. “Every point matters and the guys definitely have to be ready to show up.”