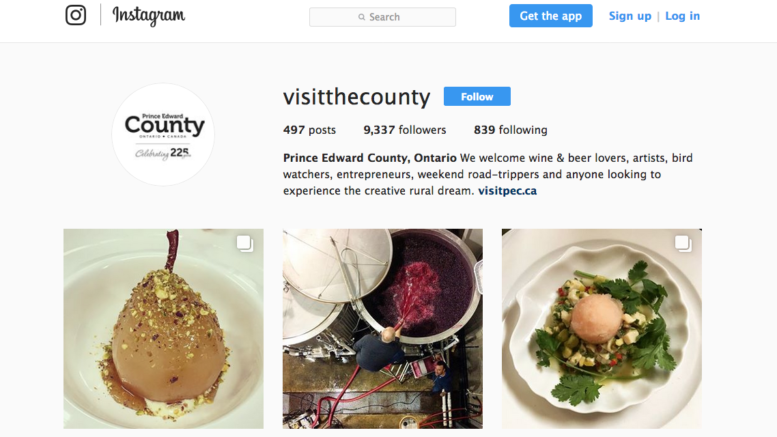 The County’s community development department hasn’t been shy about embracing digital technology to get its message out. That commitment has worked in engaging visitors and investors.

Before the municipality’s community and economic development commission Monday, director of community development Neil Carbone offered a glimpse into the numbers behind the County’s social media and web efforts.

Carbone said staff is pleased with the way it has moved onto the social media platform Instagram and started to use it as a lure to the community. The County now has over 9,200 followers on the photo sharing platform and hopes to reach 10,000 by the end of the year. With just 3,600 followers to end 2016, there’s been a massive increase in engagement.

“You’ve heard Instagram tends to be the social media platform used by the younger demographic,” Carbone told commissioners. “It’s ideal for Prince Edward County. Our value proposition to people coming here is visual. There’s still an opportunity for commenting and sharing and hashtags, but it really helps us develop conversation.”

Carbone said he’s pleased to see how local businesses and tourism operators are joining the campaign to push the County’s narrative through Instagram.

On Facebook, which tends to have an older demographic, the County had over a million page impressions this year and increased its likes from 4,700 last year to 5,500 this year.

The Build a New Life web platform continues to get results. Since May 2016, there have been over 300,000 impressions and over 3,300 subscribers to newsletters and push content. The site has led to 130 business inquiries worth about $65 million in investment.

“We now have a countywide job board and an available rental housing listing on Build a New Life,” he said.

“We’re recognizing we have a growing audience there and people are using (the site) as a resource.”

The two features use aggregators to pull information from other listing sites like Kijiji or Indeed and repost them on the County vehicle to look as if it’s their own content.Carbone said employers or landlords just have to post their materials to those major sites and the aggregators will find them.

Commissioner Dianne O’Brien expressed concern the site may be doing too good a job. She noted she learned of one couple that migrated from an urban area to buy a new home in the county but they found their earnings didn’t meet their expectations here.

Carbone indicated he understood the concern, but added there are good resources and tips and tricks available on the site. He said through follow ups, County staff could also guide people appropriately.

He said most people who relocate do find themselves informed and the county is meeting their expectations.

“People are increasingly maintaining their livelihoods as they are able to telecommute or work as an independent contractor or consultant,” he said. “Generally, we try to educate people of what the opportunities are, what sectors the employment is in and where growth and demand come from.”

Carbone said the new tourism web site, www.visitpec.ca has engaged 18,000 individual users since its launch in July. It has also attracted over 200 businesses and 60-plus event listings.

The County has run Google advertising campaigns, but Carbone said a lot of value comes in organic traffic, whether it is generated through social media, earned media, or otherwise.

He said the plan for the tourism web site is to follow Build a New Life’s model for growth and success.

“People sharing information has really driven traffic to Build a New Life. We’ll be looking to do more tourism-related blog stories and have more new editorial content to generate traffic, push us up on search listings, and get people engaged.”

Goals for 2018 include a reaching benchmark of 500 business and event listings, providing 25-plus blog stories (one every two weeks), and developing itinerary content. Carbone said some of the feedback the County received about the site was that people loved its graphic map breaking down the municipality into tourist regions, but when people clicked on the regions, there wasn’t enough information to drill down to about specific attractions.

The County will be looking at a pilot project next year that will see the tourism web site tied into touch screens at kiosk locations. Increased mobile functionality is also a desired outcome.

Carbone said staff is also working on presenting text information on the site in French given the steady interest in visits from Quebec and it has received funding from the Great Waterway to do that.