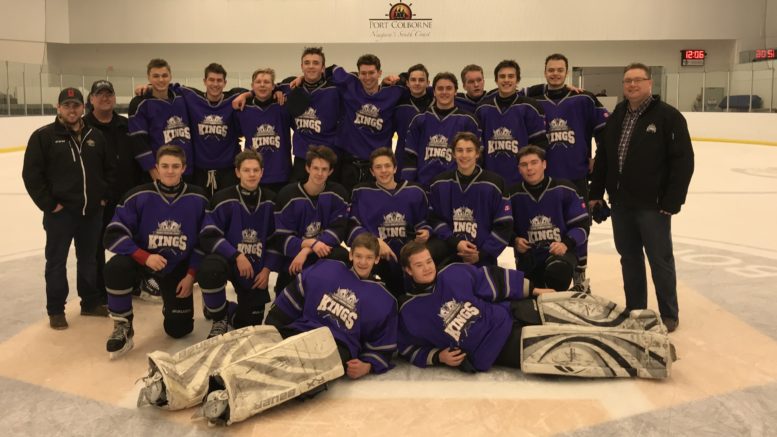 FOR EVERY KING, A CROWN- The Ainsworth Funeral Home Midget BB Kings were winners at the 2017 Teeder Kennedy Classic in Port Colborne this weekend. (Submitted Photo)

Tournament time seems to be a time zone members of the Prince Edward County Minor Hockey Association are growing accustomed to this season.

This past weekend, the Ainsworth Funeral Home Midget BB Kings got in on the act at the Teeder Kennedy Classic in Port Colborne and took home the title, downing the Strathroy Jr. Rockets 5-2 in the championship final named in honour of the Toronto Maple Leaf great..

The tourney win marked the second successive fall conquest for the midget club and the sixth tournament win by a County Kings team in the 2017-18 season.

The locals got it rolling on Friday afternoon, marooning the host Port Colborne Sailers 4-1 thanks to a pair from Cole St. Pierre and singles from Keegan Scott and Nolan Steen.

Tasked with playing a second game on Friday, the Kings were able to keep the Kent Cobras to a single goal against but couldn’t generate much offence themselves and had to settle for a 1-1 draw.

Hunter Van Vlack was the only King to light the lamp.

On Saturday, a potential 2018 first round OMHA playdown preview was in the offing as the Kings drew the Stirling Blues.

The Kings came ready to play and built a 4-1 lead thanks to goals off the sticks of Van Vlack, Alex Brady, St. Pierre and Kaleb Stacey.

The Blues bounced back to squeeze a pair through Kings netminder Ben Clarke in the final frame but the locals held on for a 4-3 victory.

The result meant Saturday’s afternoon’s affair with Strathroy was academic as both clubs had already punched their tickets to Sunday’s final contest.

With nothing on the line, the Kings played possum and only great goaltending by Noah MacDonald kept the game from getting ugly.

On Sunday, Strathroy was taken off their game early as the Kings roared out of the gate from the opening face off, netting three before the end of the first.

A Stacey goal in the second pushed the Kings ahead 4-0.

Strathroy would finally beat Clarke later in the frame and another Rockets tally in the third had the club thinking comeback but Scott would put any dreams the opposition might have had of forcing a shootout to bed with a goal with about five minutes left.

Kings coach John Kelly pointed to Clarke as one of the top Kings players as the netminder was named MVP of the final game.

“Anytime you can get solid goaltending in a tournament you have to like your chances and Clarke was on for us,” Kelly said.

Last year, it was the 2016 Bobby Orr Classic in Parry Sound where the Kings reigned supreme and this year, a visit to the shores Lake Erie provided the same type of magic for the locals.

“It’s always nice when you can make memories at tournaments like these and hopefully this is something that gets the players primed for OMHA playoffs,” Kelly added.