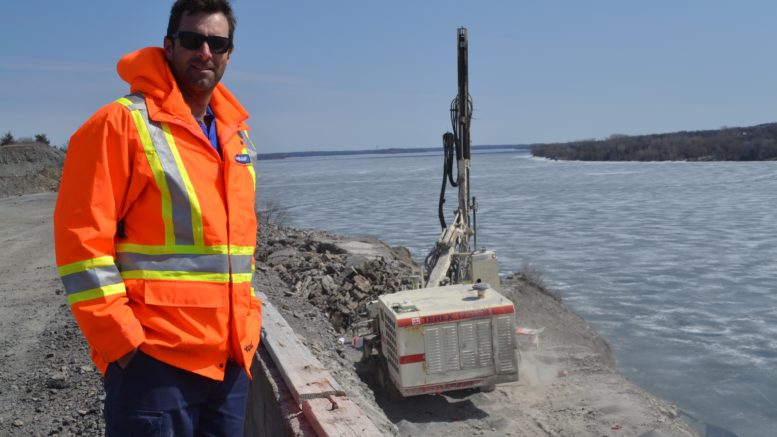 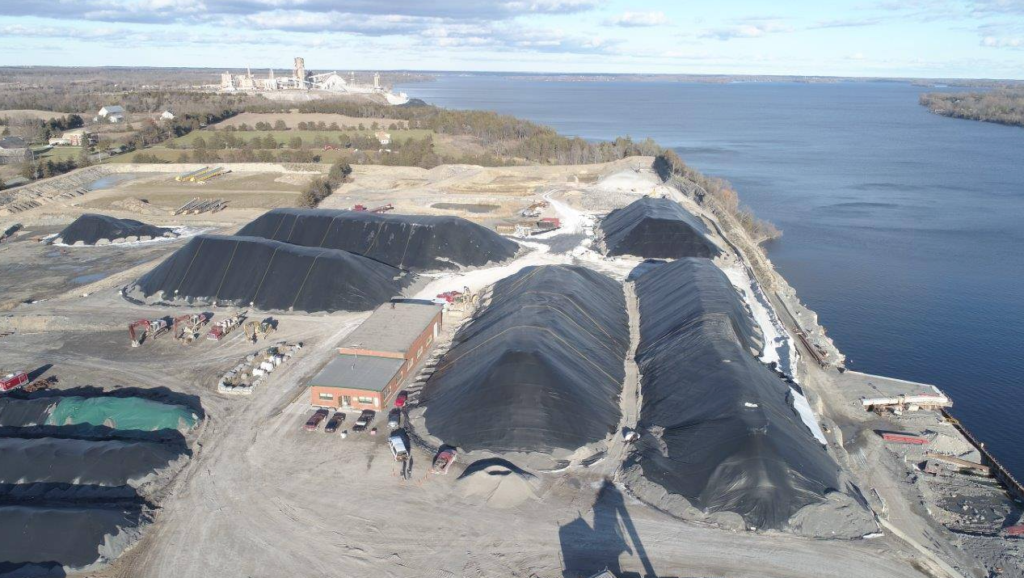 UPDATE: Picton Terminals appeared to meet the MOECC deadline of having piles of bulk sodium chloride used in winter driving applications covered by tarps by the end of the day Wednesday. In a post to the company’s Facebook site, Picton Terminals thanked Coverall Tarping, a Texas-based firm that specializes in covering commodities for protection from the elements, for working expediently and completing the Provincial Officer’s Order to cover the piles prior to the deadline. Picton Terminals posted an aerial photo (at right) showing the completed work.

A Picton-area port operation had until the end of the day Wednesday to cover bulk sodium piles after a round of provincial officer’s orders made on behalf of the Ministry of Environment and Climate Change (MOECC) were issued last week.

Picton Terminals was originally ordered by MOECC enforcement officer Shannon Kelly to comply with several orders including one in relation to the uncovered piles of road salt sitting atop the cliff face at the site to be covered by Friday, Nov. 24 however that deadline was extended to Wednesday late last week.

Among the other tasks ordered by the MOECC was for Picton Terminals to retain and submit a “qualified person” to prepare an interim action plan to ensure measures are in place for the management of stormwater runoff at the site “until such time as the fully covered structures for salt storage are constructed and operational.”

Kelly added in her order that the plan should be designed to significantly reduce and/or prevent the discharge of contaminants, specifically dissolved road salt, from causing adverse effect to the natural environment.

Starting in May 2017 ministry officials met with Picton Terminals or attended the site no less than seven times and responded to 72 complaints either through the MOECC’s Spills Action Centre or through e-mail contact mainly due to reports of uncovered salt piles, salt-infused storm water runoff and potential negative impacts to Picton Bay.

In her report, Kelly said that throughout 2017 there were and continue to be both ongoing issues with tarps blowing off salt piles and issues with Picton Terminal’s requirement to cover all arriving salt piles within 15 days as prescribed by a separate provincial officer’s order made last November.

Save Picton Bay (SPB), a group critical of Picton Terminals and their port operations, called attention to the portion of Kelly’s orders that called for a qualified person to be retained to develop and implement the plan.
Spokesperson Dave Sutherland said SPB viewed Kelly’s report as scathing with concerns over a one-paragraph interim action plan submission Picton Terminals made Oct. 31 after being requested to do so.

“It is clear to us that MOECC has lost confidence in Picton Terminals,” Sutherland said. “The report indicates concerns regarding a lack of detail in previous action plans and Kelly advised Picton Terminals that the ministry would only accept a detailed action plan prepared by a qualified person.”

During a site visit after a significant stormwater event in October, Kelly visited a neighbouring property and found the berm Picton Terminals had installed to prevent discharge was not adequate.

“The exposed salt piles have been and continue to be exposed to significant rainfall events resulting in stormwater runoff containing dissolved road salt being discharged to a neighbouring property and directly to Picton Bay potentially resulting in adverse impacts,” Kelly wrote.

Ben Doornekamp of Picton Terminals was looking at the provincial officer’s orders as another step in the process toward a multi-million dollar dry storage facility that will be installed after a portion of the rock face is removed.
“Both Picton Terminals and the MOECC agree that dry storage is the solution and the only solution and we are getting to that final stage,” Doornekamp said.

Doornekamp added that a full interim action plan has already been drafted in rough form and would be submitted to the MOECC in proper form prior to the ordered deadline.

In terms of tarping, Doornekamp said Picton Terminals retains the top tarping firm in the province that spend time tarping materials all over Ontario and Quebec.

“Could and should there be five more tarping firms going? Absolutely but they try to balance it for everyone they tarp for,” Doornekamp said. “The problem is that there are stronger and more frequent winds and they are causing tarps to go beyond their design loads and tarps are failing much more frequently.”

Even if he had issue with Kelly’s report, Doornekamp said it wouldn’t matter but he did offer that the previous owners that took shipment of bulk road salt used in winter driving application confirmed to Picton Terminals they had tarp failures all the time.

“But nobody seemed to care,” Doornekamp said.

As for the dry storage plans that are before the MOECC, Picton Terminals may be putting the bulldozer in front of the boulder but Doornekamp has a good feeling about the plan.

“Rock removal has started already and we are taking the risk to start removing rock ahead of the MOECC approval but we have a good feeling,” he said. “The design of the building and conveyer system is about 80-per-cent done and all the behind-the-scenes engineering will be completed when it finally comes time to build….In an optimistic world, we will have at least one of the two storage buildings up and running in two years.”