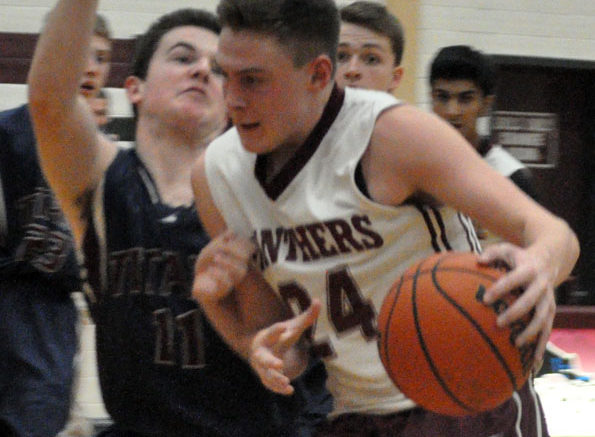 Offensive power - Logan Stark, pictured here in an exhibition game this fall, has been a key contributor for the PECI Junior Basketball Panthers with 30 points in two games.. (Adam Bramburger/Gazette staff)

Juniors have easy time with Trenton, but fall to Bayside in tight game

The PECI Senior Basketball Panthers stepped on the court with high hopes last week as they started the Bay of Quinte Conference campaign — and in a couple games, they’ve lived up to their expectations.

The Panthers were able to augment returning leaders like John McHugh, Wyatt Gilbert, and Braedan Kelly with a core group coming off the school’s first COSSA junior championship in over two decades last year. Players like skilled big men Brodie Byford and Alex Arsenault and shifty guards Jack MacCool and Devon Wilton will be looking to contribute immediately at a higher level.

Coach Rob Garden likes what he sees so far as he expects his squad will have a chance to compete in the league.
“It looks like it will be four teams at the top — us, St. Theresa, Nicholson, and Quinte,” he said this week.

The Panthers opened their season by bombing the Trenton Tigers 99-20 last Thursday outscoring their opponents’ full-game total in the first quarter. Kelly would lead all scorers in the game with 18 points while McHugh also had a hot hand with 15. McCool, Byford, and Gilbert also reached double digits with 11 points each.

Against the Bayside Red Devils Tuesday, the results were similarly lopsided as the Panthers put up a 76-12 decision on the road.

The Panthers face the Centre Hastings Centurions today at 5:30 before heading to Kingston for the Holy Cross Crusader Holiday Classic. Garden said the tournament will give the Panthers a good idea where they stand against some top ‘teams from other areas.

“It features some of the best ‘AA’ and ‘AAA’ teams from across the province,” he said. “We are the smallest school at the invite-only tournament, so it will be a good test to see where we’re at.”

The Junior Basketball Panthers also have a deep bench this year and coach Caleb Hugh’s team has show so far it can score. In two games to start the year, the younger Panther squad boasts a 1-1 record.

Against Trenton Thursday, the Panthers took a 62-24 decision over the Tigers. Logan Stark led the way with a 14-point effort. Ryan Doolan had 12, Ghaffar Mehmood 10, and Justin Smith nine.

It was a tougher outing Tuesday at Bayside as the Panthers took a lead into halftime but couldn’t overcome a strong Devils’ third quarter as they lost a difficult 53-49 decision. Bayside overcame a five-point deficit and went into the final quarter up three points.

Grade 10 veteran Stark again played a leading role as he contributed 16 points. Freshman Jasper Gilbert had a strong outing with 10 points. Doolan had eight and Ross Maycock six as seven Panthers scored in the loss.
The Panthers host the Centurions at 4 this afternoon.