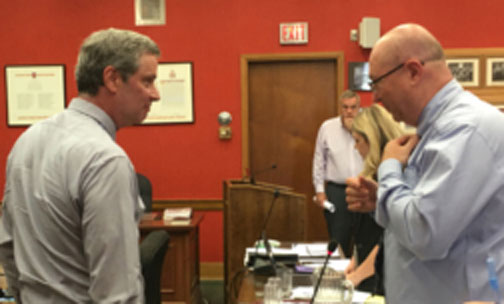 The Ontario Municipal Board has dismissed a resident’s appeal of the bylaws that will re-divide the municipality’s ward boundaries and change the composition of council.

“The public consultation process was open and fair and the engagement by the public was impressive,” Sills wrote. “The board is satisfied that council had proper regard for the greater public good, and only after assiduous consideration made its decision.

The board finds no reason to interfere with the decision made by County council.”

Council adopted the nine-ward electoral boundary proposal on Nov. 10, 2015. The approval of the bylaws was decided by a recorded vote of 10–6 with councillors Kevin Gale, Bill Roberts, Barry Turpin, Jim Dunlop, Gord Fox, and Mayor Robert Quaiff voting in opposition.

Mayor Robert Quaiff said in an interview Thursday the decision confirms that council and the County took the appropriate steps to engage the public and the process was fair.

“The OMB sided with the municipality that we did the right thing and they dismissed Pierre Klein’s appeal,” he said. “It is what council directed, it is what the majority of council wanted — at the end of the day it’s a success for Prince Edward County.”

Council size was an issue Quaiff vowed to address in the lead-up to the 2014 municipal election. Asked whether he considered the decision satisfactory, he reiterated it was a move the majority of council supported.

Asked how he felt about Sills’ decision, councillor Bill Roberts said the County went through the appeal process and will now go forward with the wards approved by the majority of council.

“As a citizen — without my councillor hat on — I think that if Sophiasburgh had two councillors, there’s probably better representation,” he said. “Even the practical aspect if someone can’t make it, there’s most likely another councillor in attendance.”

Councillor Jamie Forrester was among those who supported the nine-ward plan. He said he was happy with the decision.

“The process was carried out over a long period of time, there was a lot of public consultation and I think we got the right decision,” he said. “Hopefully this (issue) will be laid to rest for the next four or five years.”

He said if there are issues, council has the opportunity to address them in the future. However, he said he’s hopeful council size won’t be an election issue next year.

Under the plan council would be reduced to 13 councillors with the mayor elected at large. Bloomfield and Hallowell will become Bloomfield/Hallowell, will be known as Ward 2, and will be represented by two councillors. Representation in Sophiasburgh will be reduced by one councillor position from the current two and the ward will be renumbered to Ward 6. The process to arrive at the decision included seven special meetings and nine public consultation sessions.

Following approval, the bylaws were challenged at the OMB by Klein. The hearing took place from July 19–21 this year at Shire Hall.

In a press release, Klein said he was disappointed and suggested Sills’ decision fails to address substantial legal issues. He argued Sills refused the introduction of evidence and testimony that were relevant to the legal issues “and substantially curtailed the ability under natural justice to place before the board evidence to make a full case.”

“The next Council electoral composition will still be in violation of the principles contained in the Carter decision, our Charter of Rights and Freedoms and other case law,” Klein’s release says. “This means we will be dealing with this matter again in 2019 as a result of the lateness of this decision.”