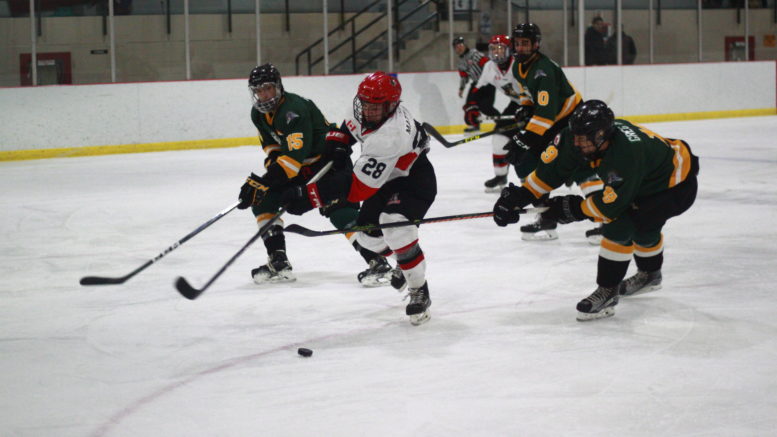 Picton Pirates forward Bailey Matthews fends off Wyatt Crampton and Cody Smith of the Amherstview Jets on his way to the net. Matthews picked up a pair of assists in the game. (Chad Ibbotson/Gazette staff)

The local Junior C club collected two points in a 6–1 win over the shorthanded Jets with four of those goals coming in the final frame.

The win increases the gap between the teams to six points. Picton sits in third place in the Tod Division with 27 points and Amherstview trailing in fourth with 21.

Pirates general manager Chris Masterson said it was a big game, a huge two points, but overall the team has to be better.

“Amherstview has closed the gap on us a little bit and we definitely want to be in the top three,” he said. “It was a huge game for us in that sense, but I don’t think we played our best last night and Amherstview was short-staffed.

It was a good victory, but overall we’re only somewhat happy with our performance.”

The Pirates went ahead just past the midway point of the first with Zach Kish serving a minor penalty for slashing. With seconds left in the man advantage a rebound bounced into the slot to Noah Brant. Brant turned and fired a shot past goaltender Hayden Ford who was sprawling forward with an outstretched glove. Jesse Kestenbaum and Bailey Matthews had assists on the play.

The Jets held a 10–7 advantage in shots through 20 minutes, but went into the intermission down by a goal.

The Pirates had a slow start to the period, but the team picked up their play in the second, Masterson said.

“We thought the first period was probably one of our poorest, if not our poorest, period of the whole season,” he said.

He said the coaching staff delivered the message that the team had to bring more intensity and they responded to the message.

“We had a good talk at the end of the first about the opportunity we have as a team,” he said.

He said staff believe the team has what it takes to be a top team, but the missing ingredient has been consistency.

The message seemed to make a difference early when Brant tallied his second of the night just 3:42 into the middle frame. Devin Morrison and Jordon Cannons had the assists.

Both teams had their chances, but neither was able to find the back of the net through the remainder of the period. The Pirates edged the Jets in shots by a 16–10 margin in the frame.

“We came out in the second and we played much better and then in the third period we continued to keep up the intensity level,” said Masterson.

Just 2:16 into period Nick Kyte found the back of the net. Nick Hoey and Cannons collected helpers on the play.

But the Jets came right back.

The urgency on the Picton bench ratcheted up. At the 5:34 mark, Cannons restored the three-goal lead on a play from Devin Morrison and Brant. Just 2:24 later the Pirates struck again. This time it was Morrison scoring from Brant and Matthews to make it 5–1.
The Pirates continued to pile up chances through the remainder of the period, eventually outshooting Amherstview 18–8 in the frame. Gerald Bilker’s goal at 18:35, from Kelsey Katchuik and Justin Arnold, rounded out the scoring.

It was a four-point night for Brant. Masterson said Brant brings a wicked shot, physicality, and grit on a nightly basis.

“He’s exactly what we thought he’d be, which is a solid, hardworking power forward,” he said. “He certainly performed well (Thursday) and he does every night.”

The Pirates take on the Gananoque Islanders Thursday before visiting the Campbellford Rebels on Friday. Puck drop for both contests is 7:30 p.m.

Masterson said it won’t be the same Gananoque team that Picton faced over the first half of the season. The club has made a number of additions and have the ability to catch teams by surprise.

“We have to work hard this week at practice and we have to bring that intensity that we bring to a Napanee or Port Hope or Amherstview game,” he said. “We cannot take them lightly and I think the players are aware of that.”