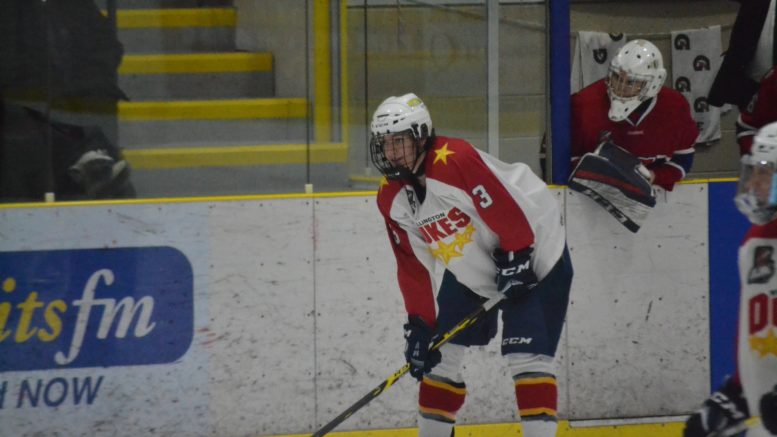 LATEST PICK UP- The Wellington Dukes added defenceman Noah Lugli to the roster this and the rearguard paid instant dividends, picking up two assists and playing regularly in wins over East Division foes Whitby and Kingston. (Jason Parks/Gazette Staff)

The Wellington Dukes have made a big acquisition in more ways than one.

The club announced late Thursday they have picked up hulking blueliner Noah Lugli from the Minnesota Magicians of the North American Hockey League.

Lugli, a Toronto native, had three helpers in 16 games for the Magicians before packing up his top hat, cape and right-handed wand and heading east towards Wellington.

“He’s going to provide a large, physical presence to an already outstanding blue line,” Wellington general manager and associate coach Ryan Woodward told the Gazette. “(Lugli) is happy to be here with us and the Wellington Dukes are thrilled to be a part of his development.”

Lugli, 18, was a fourth-round draftpick by the Hamilton Bulldogs in the the 2015 OHL Priority Selection draft but appears destined to go the NCAA route following junior hockey.

At 6’5”,  215 pounds, Lugli becomes the largest Wellington rearguard on the club’s roster.

Prior to embarking to Minnesota this fall for his 16 game foray in the NAHL, Lugli played at St. Andrew’s College prep school in Toronto and was a defensive partner of 2017 Toronto Maple Leafs draft pick Ryan O’Connell.

Despite not landing on the scoresheet much in Minnesota, Lugli had a pair of helpers in his first two OJHL games this weekend and played a regular shift for the Dukes in wins over Whitby and Kingston.