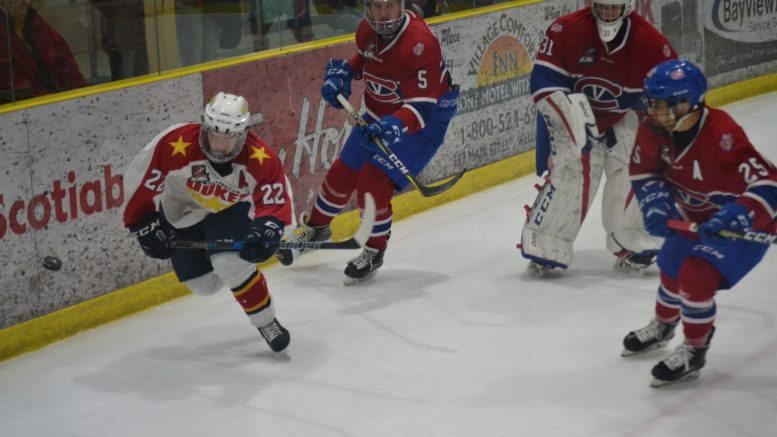 IN THE THICK OF IT- Wellington Duke Mitch Martan tries to wrangle an errant puck while being watched by a trio of Kingston Voyageurs. Wellington took down the Vees 4-2 in a spirited affair. (Jason Parks/Gazette Staff)

Perhaps they weren’t the most visually pleasing hockey games ever played but the Wellington Dukes didn’t blink when tasked with a pair of contests this weekend.

The Dukes played it close to the vest in games against Whitby on Friday night and Kingston on Sunday afternoon to escape with the full compliment of points and keep pace with the cream of the crop in the Ontario Junior Hockey League.

While it’s still a little crowded, Wellington (21-4-7) can hang their hat in the OJHL’s penthouse by virtue of their 49 points.

That mark leaves Wellington tied with the Oakville Blades (who visit Essroc Arena Sunday afternoon) for the overall OJHL lead although Wellington does have a game in hand.

With a healthy lead on second place Kingston on the OJHL’s East Division that moved to 16 points clear of the Voyageurs after Sunday’s 4-2 victory, Wellington is more about the way the sum of the parts are producing at this time and place in the 2017-18 regular season.

To hear general manager and associate coach Ryan Woodward offer commentary on his club’s play at this point, it’s clear the team can play better.

Wellington did just enough to down the cellar-dwelling Fury 3-1  Friday before dumping the Vees on Sunday afternoon.

“We are just worried about how we are playing and what kind of shape our game is in at this stage of the season,” Woodward said “We want to get better and prepare the right way. We need to clean up some areas of our game.”

The Dukes were able to get a puck past Fury netminder Nate McDonald in the first period, breaking a 76:41 stretch of scoreless hockey between the teams that originated back to a scoreless draw the teams played in Wellington on Nov. 3.

Woodward said getting a goal early in those circumstances made things slightly easier.

“It’s certainly a lot easier to play with a lead, but in terms of our execution, things need to improve,” Woodward added. “Breaking out of our zone cleaner, coming through the neutral zone with better speed and not turning puck overs in the offensive zone will clean up our game.”

Wellington’s second goal of the game and the eventual game winner came off a broken play where McGeen looked stopped just inside the blue line.

However, the puck seemed to have a mind of its own Friday and players on both sides had trouble controlling the disc and McGeen managed to strip a Whitby defender of the puck he had just lost.

Stalking McDonald, McGeen skated across the tops of the circles in the Whitby zone and zapped a laser beam past the Whitby netminder  with under two minutes to go in the second to give the Dukes a two goal cushion.

In the third, Dukes netminder Jonah Capriotti faced a ravenous Fury squad that had yet to light the lamp behind him in 110 minutes.

Left to his own devices in a few different sequences, Capriotti was equal to the task as the visitors charged hard to the Wellington cage.

More than once, the Mount Hope, Ont. native was forced to make a 10-bell save to keep Whitby off the score sheet.

Finally, the Fury were afforded a two-man advantage and the Wellington dam broke as Matt Latin collected a bouncing puck at the side of the net and beat Capriotti at 12:45 to make it a one goal hockey game.

Wellington, having gained more experience in these matters as the campaign has wore on, was able to grind down the Whitby resolve and, save for a few flurries around the Dukes net, the hosts were solid on the puck in the final moments.

In the last minute, Ben Evans was able to lug the puck over the Whitby blue line and fed Daniel Panetta for an easy empty net goal at 19:05.

Despite there being a huge swath between the two opposing clubs with Kingston in second place and Whitby in fifth, Wellington might have had an easier time of it on Sunday against the Vees. 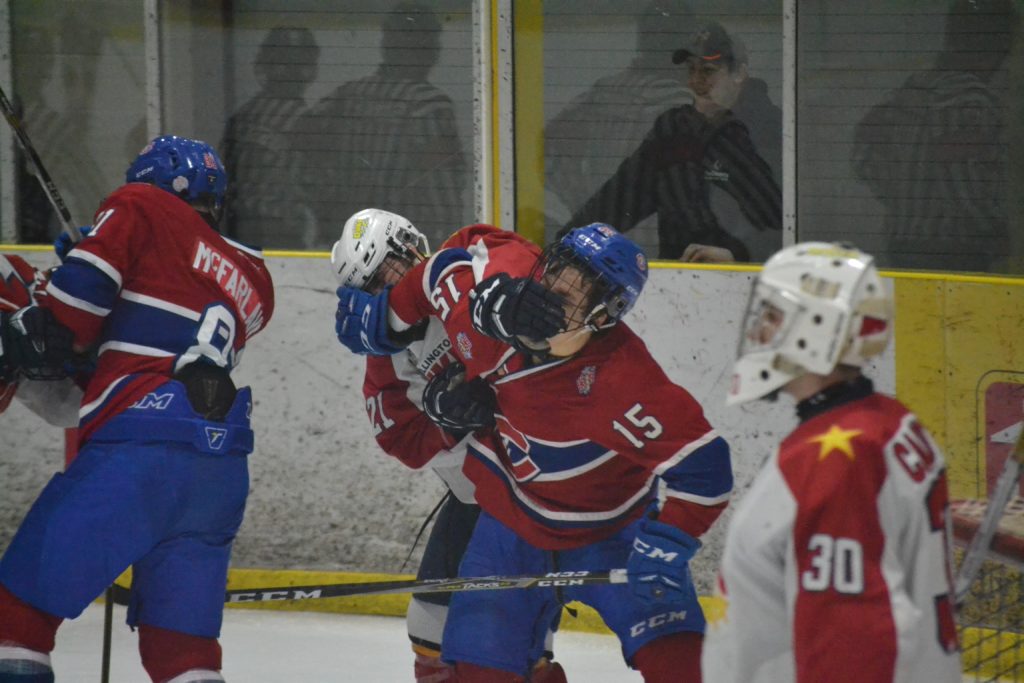 The Dukes were able to build a 3-0 lead over the visitors thanks to goals from Declan Carlile, Mitch Martan and Teddy McGeen staggered over the first 45 minutes.

Kingston seemed to wake up and started pushing back in the final ten minutes of the period and a pair of extra attacker goals inside the last two minutes not only spoiled a perfect outing from Capriotti but gave the visitors a shot to tie the game late.

Finally, an empty netter by McGeen with less than 30 seconds left sealed the game save for the extra curricular that Kingston precipitated when their frustration boiled over in the waning seconds.

While the ending might have taken some joy out of the proceedings from a Wellington point-of-view, it was none the less a massive two points for the hosts who have been playing cat-and-mouse with the Vees through the standings for the past two weeks.

“It was a good effort all around especially with Colin Doyle, Evans and Mason Snell away at Team Canada East camp. It was chance for our players to eat larger minutes and there were no passengers Sunday afternoon. They all worked hard and had good jump,” Woodward said.

The GM nodded to netminder who won his fourth straight start.

“Capriotti was fantastic and made some great saves,” Woodward said. “We know they come in waves, and it’s an older club that tried to lean on us a bit but we were able to respond.”

Wellington will take on the Markham Royals at Centennial Arena on Friday night before hosting the Blades in a battle of OJHL Conference leaders on Sunday afternoon at Essroc Arena.

‘Round the ‘Roc: It appears the Dukes might be without Doyle, Evans and Snell for some time as all three were having outstanding camps. Doyle, an injury fill in, had a goal on Sunday for Team Gold. Bloomfield native and North York Rangers netminder Jett Alexander stopped 25 of 26 shots through portions of two games and lead Team Gold to a shootout victory in Day 1 of selection camp. The trio of Dukes and Alexander survived the first wave of cuts announced Monday afternoon.