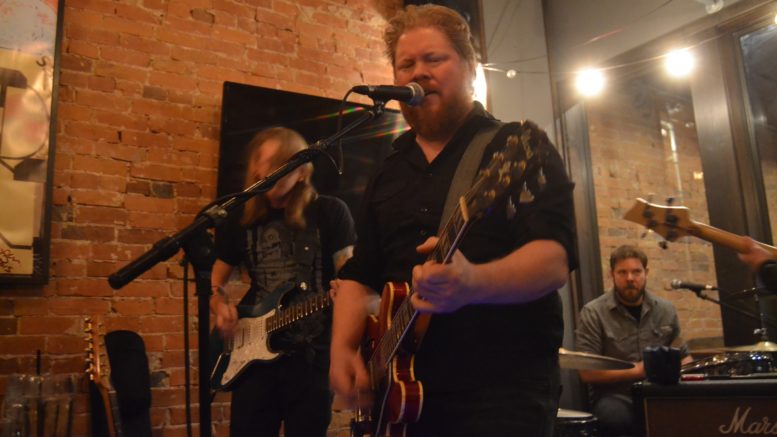 ALL FOR A GOOD CAUSE Local artist Jeremy Kelly is just one of several that will be performing Saturday night at Karlo Estates. The event, called Thanksgiving Jam, is a fundraiser for the Food To Share group that produces meals for local food banks. (Jason Parks/Gazette File Photo) (Jason Parks/Gazette Staff)

The development and growth of a highly talented musician was on full display at the County Canteen late last month as Jeremy Kelly celebrated the release of a four-song EP compact disc with a intimate concert in front of several fans, family members and friends. Kelly, a Stirling native who studied at Humber College and now lives in Cherry Valley, has preformed and recorded with Edwin of I Mother Earth as well as several Canadian Idol winners and finalists and even was part of the house band at Blue Man Group performances in Toronto.

The show was equal parts hard driving rock and roll from his Kid Richards band days that are in a similar vein of Canadian notables Treble Charger and more melodic roots examples that dot his new release.

From the Ry Cooder-inspired twang blues rock piece Comin Home to a catchy Walking out the door that seems to trace around an Oasis jam to the brooding Stuck Outside Atlanta, this is a new dimension for Kelly thanks to inspiration from the sights and sounds and experiences around him.

When asked about the stark contrast between what was new and what was not, Kelly said it was simply a matter of time.

“Some of those songs are from when I wasn’t married and I was still a ‘rock guy,’ Kelly said with a laugh. “The music starts to slow down with the more recent stuff and I can’t really deny I’m getting older and starting to slow down.”

Kelly said he’s be listening to more roots and folk inspired music and that coupled with life experience as a husband and father of two has impacted his craft.

“I’ve always been interested in that type of music and certainly Ry Cooder was a big influence on me going back to the music he did for the movie Crossroads. That movie made me want to pick up a guitar,” Kelly said .

For his set, Kelly leaned on his brother Scott Kelly to play drums while Dave Tonelli played bass and all three are regular band mates.

But for lead guitar for some of his heavier early songs like Radio One, Kelly tasked Chris Bonham-Carter, a local standout that can shred with the best ax handlers in the Quinte area.

“I’ve been playing with Scott since time began and Dave and I have been playing for 12 years or more,” Kelly said. “I needed a second guitar player and I was pretty sure Chris would fit in. He comes from a very different place than I do, I’m more of traditional roots guy and he comes from a much more technical and modern type stuff and I think the balance sounded really well.”

For more information on the EP or Kelly’s other releases, please visit www.jeremykellymusic.com or @kidrichards on Instagram.