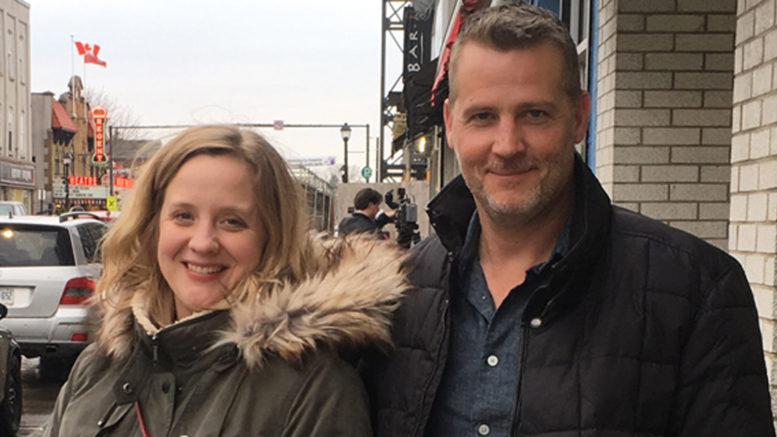 Riding the momentum of their most successful year at the box office yet, the Festival Players of Prince Edward County are busy finalizing details for their 11th season in 2018.

Artistic director Graham Abbey was in town last week and he and managing director and producer Julianne Snepsts visited with local media to discuss the direction of the company.

Abbey said his primary goal is to be able to grow an audience base and continue to push the envelope further toward a less nomadic existence with set venues where “people — either the local community or people coming to the county — know this is where you can go to see great theatre and professional theatre.”

After getting a foothold in Wellington last year, that vision may be expanded to other stages in the county again this year. Eventually, the company will put down roots for a permanent home.

Until then, the vision is providing varied, high-quality professional performance.
“It’s not a new thought to do a series of things done well on the way to something larger,” Abbey said. “That’s what Julianne and I have been focusing on.”

Abbey said he’s hoping to start the summer with a big splash, followed by the studio season and another big show to end the year. Asked if he could divulge any hints, Abbey said the many of the pieces being considered are Canadian and some may involve the shows’ creators being actively involved. They’ll also fulfill the company’s mandate of selecting works that speak to the experience of county live.

He also indicated a push to hire diversity on and off stage will be in the works in the near future.

Abbey said he believes the county environment and lifestyle lends itself to attracting top talent to play on local stages.

“There’s an interesting spirit out here that speaks to a creative soul,” he noted.

Abbey raised the example of Bruce Dow, a veteran of Broadway and Stratford who starred in one show last season and directed another.  He’s back for a Christmas concert this Sunday and is looking to figure prominently in Festival Players’ future.

“Bruce is an old friend and he really fell in love with the county,” Abbey said. “Bruce is very interested in being out here. I don’t doubt artists will do what I did and that’s spend time in a place they don’t know and put down roots.”

Those roots will bring Abbey back to the county in May, following his Stratford commitment. He’ll be moving into more of a hands-on role and directing a show.

Abbey and Dow are also working on a vision for an academy that will be linked to the company and also link to Abbey’s Groundling Theatre Company in Toronto.

The academy will include actors in the 18-24 age range who are looking to get into professional theatre. They’ll work under the direction of the likes of Abbey and Dow and perform at the end of the session. Abbey envisions a focus on local talent and a bursary program that will help those who might not afford to go to established schools.

A draw of the academy, which will use Shakespeare as a training ground will be a chance to link with Abbey’s company in Toronto.

“A big part of our platform coming up is finding ways rural and urban artistic companies can play together,” he said. “Since I’m currently heading two companies, one in the city and one here, I’ll look for ways that work for both companies.”

That synergy might also expand to allow creatives from Toronto to incubate shows in the county. Eventually, maybe some of the young talent will come back to Festival Players as experienced actors.

Perhaps part of Abbey’s motivation for the project is drawing on his own experiences growing up in noted festival town Stratford.

“I tell the story often that I moved to Stratford because my mom took a job there. We didn’t really know it was a theatre town, it was an economical move,” he said. “I went there, I got involved in a young age, and I do what I do because that was in my locale.”

Asked it he envisions Festival Players creating a similar atmosphere as Stratford or Niagara-on-the-Lake under his direction, Abbey indicated there’s a different vision, but still one with merit.

“There’s a buzz on what is happening here in Toronto and other places. To talk about potential here is kind of silly, it’s already there and has been there for a while. There’s great places to go,” he said.

“The interesting thing, for me, when you look at someone like Stratford, they found a place that in the 1950s was economically in trouble. Theatre was the saving thing,” he said, adding while relying heavily on tourism may pose its own economic challenges, the county already excels in that sector.

“The question is can we access not only the local crowd, but the transient tourist base.  Can we say ‘I know you’re coming for the beach and wine and food, can you put theatre on your list too? It’s different than what Stratford or Shaw was doing, but I  see changes every year and I think we’re on to something great.