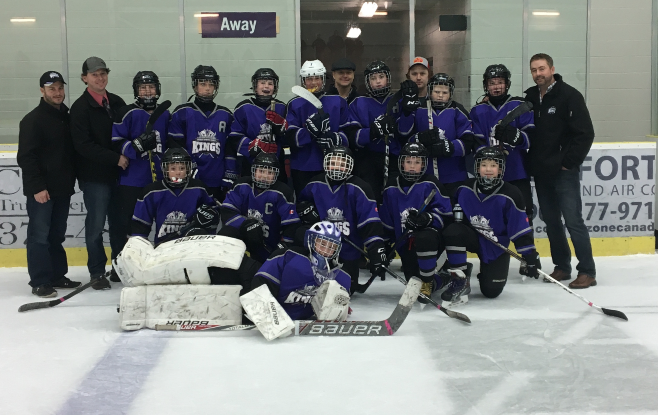 DOING US PROUD- The Pee Wee Terra Vista BB Kings made it all the way to the semifinals of the A division Silver Stick Qualifying Tournament in Cobourg late last month. (Submitted Photo)

If our dear readers have monitored these pages diligently for the past few months, they might recognize that the Prince Edward County Minor Hockey Association Kings have performed well at hockey tournaments this season, having secured a collective six titles in just under three months of play.

This story is not about a seventh Kings title however the efforts of the  Terra Vista Landscaping Peewee BB Kings at a regional Silver Stick qualifying tournament last month is nonetheless remarkable.

The Kings entered the tournament in Cobourg Nov. 24th as definite under dogs and in order to play in the prestigious International Silver Stick finals in mid-January in western Ontario, the locals would need to win the tournament which was organized for A centre clubs like Kingston and Burlington as there was no BB centre sized tournament to play in.

The Kings would definitely be punching above their weight in order to qualify for a very special hockey tournament.

“I think we knew what kind of storm we were driving into but we also felt really good with where we are as a team,” Kings coach Chris Rice told the Gazette Tuesday. “The players new they had to work hard every shift to get results and they did.”

The coach said the team relished the underdog role as well.

Riding a 14 game winning steak that dated before a conquest of the recent Milk Tournament in late October, The Kings drew the Kingston Canadians on Fri. Nov. 24th to open the tournament.

The locals would a get goal off the stick of Matthew Vincent and were knotted 1-1 with the Limestone Habs late in the game. 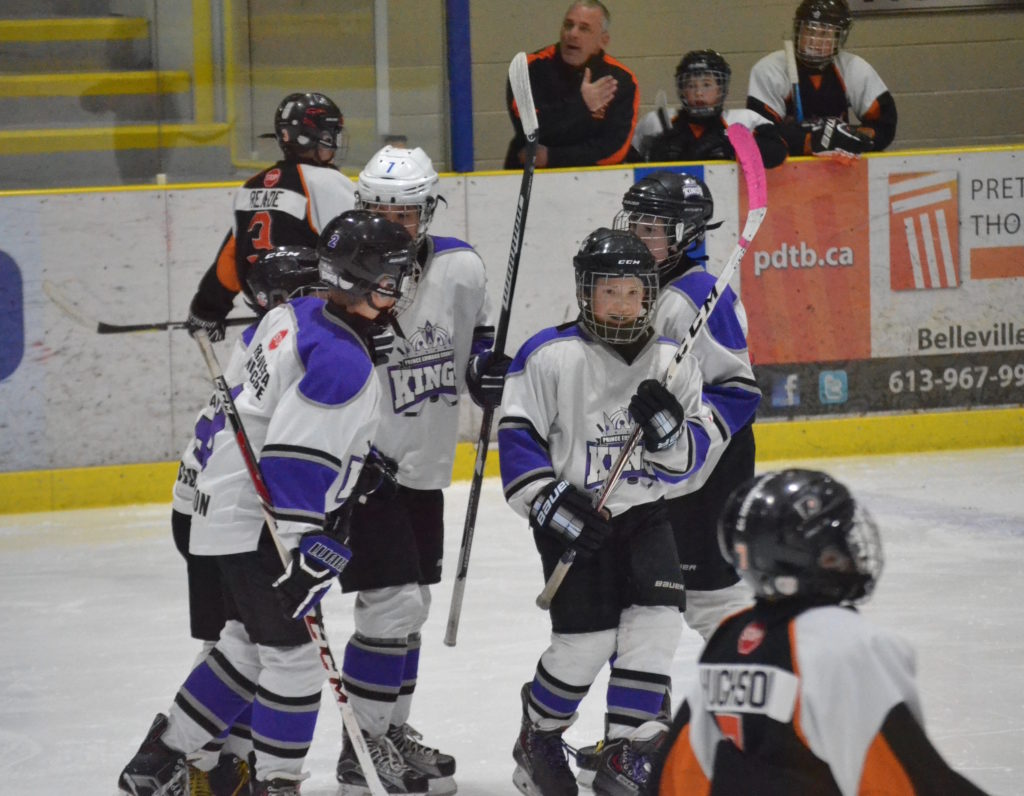 A four-on-three powerplay opportunity with just over three minutes remaining in the game opened up some space for Liam Rice and Nathan Steen to find team captain Gerrit Kempers alone and the speedy Kings forward tallied to push his squad ahead 2-1.

The Canadians didn’t quit and managed to score a powerplay goal late but the Kings made the magic happen with just under a minute left as Vincent was sprung by Mackenzie Moyer and the locals pulled ahead for good 3-2.

The next day the Kings were scheduled to take on the Quinte West Hawks who were able to get the jump on the locals early and often.

“After we gave up some goals early, we were able to skate with them but they are a very well coached and well structured team,” Rice said. “All three goals were well deserved and our start didn’t help us.”

After falling to the Hawks 3-0, the Kings were forced to pin their hopes on their final preliminary round game against the Burlington Eagles, the widely assumed pre-tournament favourite.

“That was a huge game for us and we knew they were placed pretty high in the Greater Toronto Hockey League division,” Rice explained. “We knew we had to have a good start and certainly better than we had against Quinte West.”

How about a goal 13 seconds in thanks to a nifty effort from Kempers?

“That was the start we were looking for,” Rice quipped.

That early lead stood up for nearly the entire game as the Kings matched the Eagles stride for stride and got a tremendous effort from their netminder Austin Stock.

Finally, the dam broke and the Eagles were able to beat Stock partway through the third.

Tied at a goal a piece, the Kings once again managed to find the back of the net in the late going as Reese Kleinsteuber set up Moyer at 5:19 of the final frame to push the Kings ahead 2-1.

The Eagles pulled their goalie with just over two minutes left, trying to earn a tie and improve their seeding for the semi finals.

But it was the Kings, who were spot on with their penalty killing all weekend, capitalizing as Moyer sent one into the yawning Eagles cage with just over 80 seconds to make it 3-1.

Then, a serendipitous turn of events for the Kings took place.

For some reason, the Eagles pulled their netminder again, ignoring the goal differential aspect of the tie-breaking procedures.

“We couldn’t believe it,” Rice said of the empty net situation.“Going in, we were focussing on the game and hoping the numbers would work themselves out but when we had a chance to get a second empty net goal, we knew we had to have it.”

With 42 seconds left,  Matt Millington sent a pass on to a streaking Kempers and the captain punched the Kings ticket to the semi finals while knocking the Eagles out of the tournament in the process.

In the semi finals on Sunday against the Richmond Hill Stars, things kept going right for the Kings.After a scoreless first, Vincent and Tyler Hall fed Kempers for the game’s opening goal with just over four minutes left in the stanza to give the Kings a 1-0 lead.

The Stars would tie just over a minute later but it Vincent restoring the lead with 36 seconds left thanks to a pass from Kieran Young.

All seemed right in the Kings world as the buzzer sounded to end the second.

That was until Stock came to the Kings bench in tears after twisting his knee during a sequence late in the frame.

“We ended up wrapping his knee up and he soldiered on as best he could,” Rice said.

The Stars were able to capitalize on a turnover a couple of minutes into the third and a loose puck in the crease at 6:13 gave the Stars a chance they wouldn’t miss to pull ahead 3-2.

The Kings battled bravely inside the final minutes but just couldn’t secure a game-tying marker.

The magic had finally run out for the Kings.

“Stock was amazing as usual. He gives us the goaltender we needed to win and it’s unfortunate he got hurt. He was seeing the puck really well and we had a great feeling about that game until he came to the bench at the end of the second,” Rice added.

While it wasn’t the result the Kings had dreamed about, pushing A level centres all weekend and knocking a couple out of contention was better than a silver lining.

“We were really happy with the effort and I think we showed some of these A centres there is good hockey being played in Prince Edward County,” Rice said.