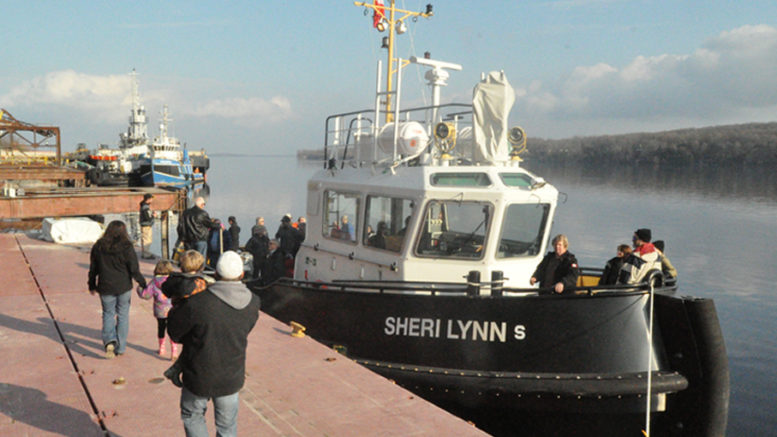 All aboard - Visitors at Picton Terminals’ open house Sunday were invited to tour the brand-new Sheri Lynn S., a 65-foot tugboat that just arrived at the port after being finished by the Netherlands-based Damen Group in Shanghai, China. The tug will be used at the port and on the Great Lakes. (Adam Bramburger/Gazette staff)

Vessel will have local crew, minimize need to contract for service

He was piloting the brand-new 65-foot tugboat Sheri Lynn S. — which arrived at the White Chapel Road port facility this week from Montreal on the tail end of a journey from Shanghai, China where it was finished — as part of a demonstration before about 30 people who came through the gates to get a glimpse of the vessel and the facility’s overall operations.

Built by the Netherlands-based Damen Group, the state-of-the-art 1,600 horsepower tug has ice-breaking capacity, sleeps four people, and features modern electronic navigation. While Ben Doornekamp, the owner-operator of the facility declined to discuss the purchase price on the record (similarly equipped used vessels are listed for sale online in excess of US $1.5 million) he said it represents a “major investment” for his company.

“One of our goals is getting things in house. We pay every time we bring a tug in and there’s no tugs that come here from Kingston or the county, they’re all from out of town,” he said. “It’s going to do some of the things we’ve hired tugs for before.”

The Sheri Lynn S. will serve as an assist tug when larger ships come into port at Picton Terminals. In addition to that support role, Doornekamp said it will push barges around the Great Lakes.

“When things get rocking, it’s going to spend a lot of time here unless it’s a night’s stay,” he said.

A local crew will be employed to work on the ship. Doornekamp said that crew will consist of three people for basic jobs, but when there’s more difficult work to be done there will likely be five people or more working on the boat.

As business grew to support the tug purchase, Doornekamp said the Picton Terminals team looked at the options available and decided against buying a ship already on the Great Lakes. Once the determination was made to have a new boat, they shopped around. A first preference would be to buy in Canada, but Doornekamp said that wasn’t feasible.

“We shopped out many companies — there’s only a few that build these tugs in Canada and it was years before they could make one,” he said. “With Damen, a lot of people class them as one of the best in the world. They build ship ranging from tugs like this to super yachts.”

He said there likely aren’t going to be many ships with comparable technology on the Great Lakes, unless other companies buy also buy new.

Doornekamp was pleased the weather co-operated Sunday as it allowed people to visit the facility and tour the ship.

“It’s a beautiful day for it. The good weather gets more people out to see it. We had a lot of repeat visitors and we also had a lot of new visitors today. They got to see the tug and the rest of the operation, which is just as important.”

He indicated open houses are important to the company as it tries to inform the public about its activities at the former iron ore docks.

“Obviously, it definitely helps. There’s no doubt about that. The big thing we’re excited for to win people over is when we get approval from the (Ministry of Environment and Climate Change) to build our salt tubs. When we get that, we’ll go ahead and start building them,” he said. “We’re hoping our time, our efforts, and our investment to protect the bay the way nobody else, in the province especially, has protected their salt storage the way we have will be the tip of the iceberg, we think.”

Doornekamp said the company strives to do things right, but acknowledged it can’t make all the advancements it needs overnight.

“We’re ready to do something. When people see the finished product, whether they’re a naysayer or a supporter, I think they’re going to say ‘ Wow’… It’s not about us being right, it’s about getting it right. We’re on the right path to that.”