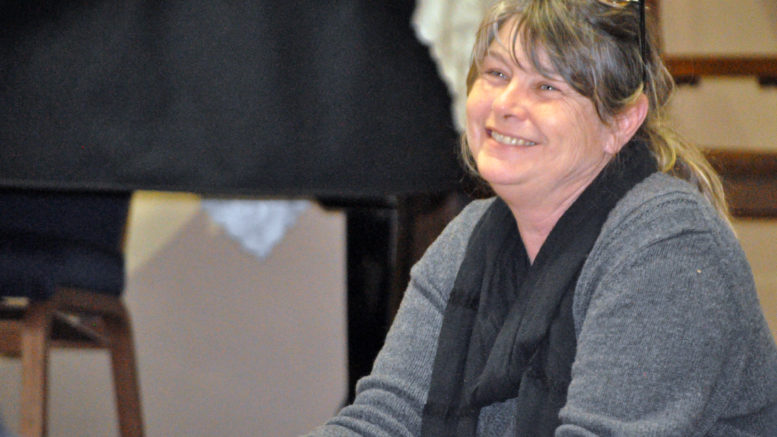 Optimistic - Alternatives for Women board chair Caroline Granger said the organization is getting close to finding a property to allow it to expand its services.

The past 30 years have been a roller coaster of emotions for those involved with Alternatives for Women, but now the organization appears poised for a breakthrough in the services it offers abused women.

At Alternatives’ annual meeting at St. Andrew’s Presbyterian Church Wednesday, chair Caroline Granger again offered a habitual refrain about a day coming when its services were no longer necessary, but she also made reference a possible breakthrough in the way care is offered and delivered.

“Back in 1989 all the agency was hoping to do was survive. I’m very, very excited today because for the last decade, all I’ve talked about was hoping we’ll go beyond doing our job,” she said.
Granger continued that through board meetings and strategic planning sessions, the idea of “space management” has been front-and-centre for the past five years. That’s come to mean more than just shifting furniture.

“It’s code for ‘Is there any possible way we can expand our services?’” she asked.

Granger said the discussions have included questions about whether offices can be made more welcoming to the women who visit; whether safe space can be provided for other meetings women need to have; and if private counselling areas may be an option. Another concern is providing more housing units for the transitional Kiosan program, which only has six units right now. Lastly, Granger said the discussion addressed her big dream over the 18 years she’s been on the Alternatives board to create an emergency shelter right in Prince Edward County.

“We started thinking about it very seriously I guess a couple years ago and we sold the house we had on King Street,” she said. “We may have found another place. It has been a long time. A couple days ago, we went to see a property that might be our new home. This is the closest I have ever seen this agency be to that next phase, to enter an expansive part of its history and to be able to do a lot more…. If we can make this happen, we’ll be able to make a tremendous difference for women right here at home, which would make me very proud.”

The numbers suggest the need is as great as ever. Across the country, one woman is killed every six days on average by an intimate partner and half of all women in Canada have experienced at least on incidence of physical or sexual violence since age 16. Granger also noted most nights in Canada 3,491 women and 2,724 children sleep in shelters for safety. Another 300 are turned away. She knows that number would be higher, but in the county in particular several women refuse to leave their own community for safe housing, choosing to put themselves at further risk rather than driving to Belleville.

In Prince Edward County, Alternatives serves on average 250 women a year. Alone, that’s less than one per cent of the total population, but over time it is considerable.

“If you add that up over 30 years, that’s a very big number. It’s actually startling. It talks about generations, women who were girls when we started who are becoming mothers and grandmothers themselves. It’s cyclical. I wish we weren’t as needed as we are, but because we are I am very grateful for the work we do,” she said.

The cases those visitors bring to Alternatives For Women are also getting more complex, says executive director Rahno Boutilier. While she said back in the 1990s, people would talk about clients generally being “a mom with 2.5 children who stayed at home except for PTA meetings and those types of things” today they range in age and they’re bringing other considerations when they walk through the door. Alternatives staff have had to learn about mental health impacts, addictions and unhealthy coping mechanisms, and they’ve also done more work with children witnessing abuse. Some new issues, like abusers using immigration status have surfaced and a hot crime along the Hwy 401 corridor has also reached the community.

“Most recently we’ve had to become adept at working with women who have been trafficked in the sex trade,” Boutilier said. “Prince Edward County is a beautiful place where people come from all over, but we’re not immune to the issues that go on in larger urban centres. You think sometimes we’re sheltered, but it’s important to avail ourselves of all information.”

She said it can be difficult to keep up to the spectrum of care, particularly with so many support services not available in rural areas, yet Alternatives staff attend many conferences and seminars to keep up to date. They’ve also started working more closely with police and other agencies in a “situation table” collaboration that has improved service.

Boutilier is hopeful also that the space management concern will be addressed soon. Alternatives is well positioned with closed to $300,000 set aside in reserved funding in its budget and other assets available.

“We have experienced many highs and lows in our search for the right property. Every step brings us closer to our goal and you will be the first to know when we have secured the perfect property,” she said.
Dee Hazell is the chair of the Kiosan program. She’s seen the crunch after the King Street property was sold as there are often waiting lists to get into the six units in Alternatives’ low-rise apartment building. With that restrictive access, in the past year 16 women, two children, seven cats, and four dogs found safety in the homes.

It saddens her, too, that the need is still so great but she was able to put a positive spin on the situation.

“We’re a pretty small community and it saddens me every year that Alternatives For Women still exists. One of the things that drives me to drink some nights is the fact it seems to be getting worse,” she said. “Then, after my second glass of wine, I say ‘Maybe it’s not getting so much worse. It’s just that maybe we as women won’t put up with the shit that in generations past we had no choice to put up with because now we have jobs and freedom and strength and we can say ‘I deserve better’… and we can leave.”

Hazell was guardedly optimistic about the news there may be a building announcement coming. She said on past tours, she’s allowed herself to picture the creation of amazing apartments, only to see purchase plans fall flat. She allowed that by the end of next year, Alternatives may have a ribbon cutting — and that’d be terribly exciting.

Granger agreed, though she indicated she’d still trade it all to put an end to women suffering.

“I’m glad we made it through 30 years, but I hope the next decade is the one where we make ourselves redundant.”