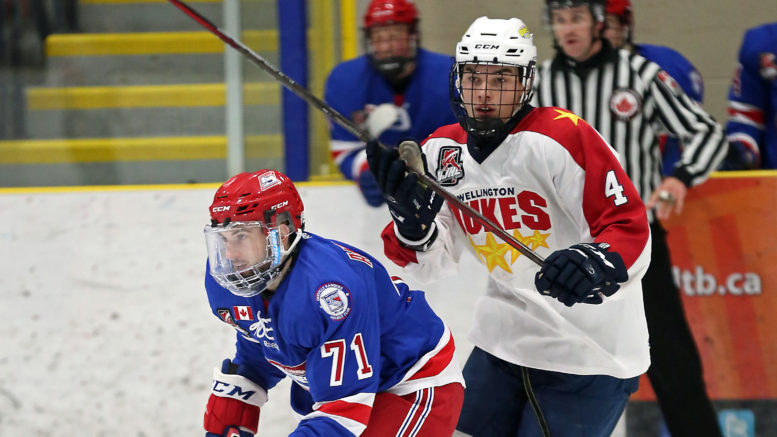 BATTLE OF THE BLADES- Zach Anderson of the Oakville Blades slips past Eric Uba of the Wellington Dukes Sunday at Essroc Arena. Wellington lost at home for the first time since October. (Gazette photo)

For the depleted Wellington Dukes, Sunday’s matchup with the Oakville Blades was simply a bridge too far.

Missing five of their top 10 skaters for various reasons, the Dukes were shaded by the South-West Conference leaders 3-2 in a particularly chippy affair that was delayed almost an hour due to a pane of glass shattered during warm up.

After winning seven in a row including a road test in Markham Friday, Wellington tasted a regulation defeat for the first time since Nov. 11 in Aurora and for the first time on home ice since dropping a 5-3 contest to Trenton on Oct. 22.

But maybe it wasn’t the fact Teddy McGeen was injured and Geoff Lawson was sitting out the second game of a two-game suspension and Mason Snell, Ben Evans and Colin Doyle were skating against Russia in the World Junior A Challenge in Truro, Nova Scotia.

Perhaps it was the ghosts of DukeDome past that were stirring against the home side as it was seven years to the day the last Wellington Dukes game was played at the old Niles St. Bandbox.

Whatever the reason (likely the former and not the latter), Wellington (22-5-7, 51 points) will have an opportunity to start a new streak Friday when the Toronto Patriots make their first and only visit to Essroc Arena. 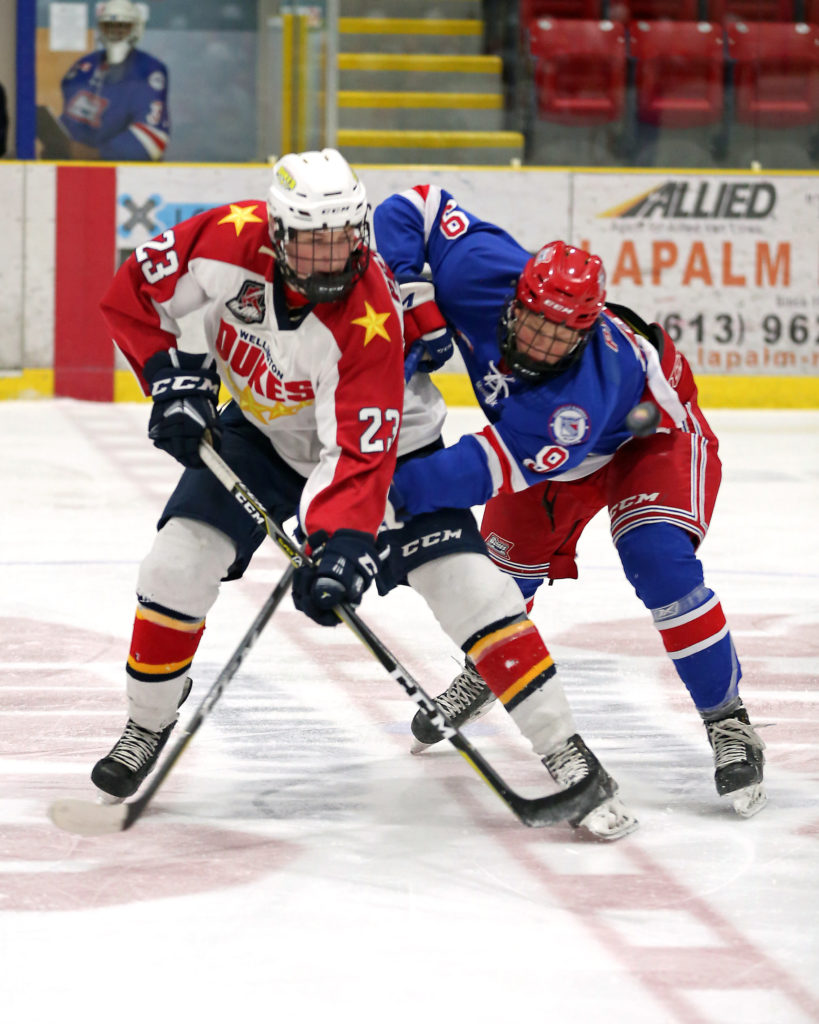 Another seldom-seen opponent in Oakville was more than equal to the task Sunday afternoon, coming hard in the first period and scoring a pair of goals early.

For Wellington, it’s been a common theme that’s been easy to overlook considering the torrid pace the Northeastern Conference leaders have set through 34 games.

“We had a bad first period to start the game and that was the difference,” Wellington associate coach and general manager Ryan Woodward said. “We played solid in the last 40 minutes but the first 20 minutes was the difference and when you play a great team in this league, you are going to need a full 60 minutes to find success. We needed to get off to a better start.”

Early in the contest, a Wellington minor whistled in the neutral zone paved the way for Garret Pyke to use Andrew McIntyre as a screen and beat Dukes starter Jonah Capriotti high to the blocker side.

Just under two minutes later, it was a bad giveaway at the blue line that allowed McIntyre to gain the Wellington zone and wrist one past Capriotti to make it a 2-0 margin for Oakville inside the first five minutes.

Wellington was guilty of not doing any of those things and were lucky to be down only two goals after the first.

In the second, the Dukes came alive.

After nearly scoring on a power play, Mitchell Mendonca picked up a loose puck in the crease and flipped it over a prone Chris Elliot to cut the Oakville lead in half at 2-1.

Oakville would wind up leading in shots in the frame thanks to a late string of powerplays but the Dukes showed some of their fine form in the second and looked like a whole different team.

“We were really happy with the push back in the second period,” Woodward added.

Unfortunately for Wellington, defensive zone turnovers were hardly in short supply Sunday and it was Matt Steen capitalizing on one to feed Spender Kersten at 1:23 of the third that put the game away for the visitors.

Declan Carlile, by far the most consistent Wellington blueliner on the afternoon, intercepted an Oakville cross ice pass and led a glorious rush where he deked one Blades defender, blew past another and roofed a shot past Elliot at 12:56 to pull the Dukes back to within goal.

Wellington, however, looked spent in the late going and were never able mount much offensive zone pressure in the final minute with Capriotti on the bench in favour of an extra attacker.

The Dukes had a better start in Markham on Friday night with Andrew Rinaldi sneaking a shorthanded goal through Royals netminder Cole Brady at the five minute mark to give the locals a 1-0 lead.

Alessio Luciani would get the hosts on the as his cross ice pass ticked off a Duke defender’s stick and took a happy bounce past Capriotti with under five minutes to go in the first.

From there, Wellington was the better of the two teams.

“We were able to weather the early storm and there were no passengers,” Woodward said. “We’ve had some players forced to step up and play in roles that they aren’t used to but everyone from top to bottom turned in a solid road effort Friday night.”

Wellington would score the only goal in the second while heavily outshooting the hosts.

Eric Uba was able to spring off the half wall with the puck and spot a wide open Keegan Ferguson at 2:53 and the Dukes defencman got just enough of the puck to place it over a sprawling Brady to push Wellington ahead 2-1.

Markham’s Zach Sheedy was able to corral a loose puck at 5:53 of the third to square the affair at 2-2 but Wellington responded late.

Wellington’s Mitch Martan stripped Sheedy of the puck inside the Wellington blueline and sprung Eric Uba and Mendonca on a 2-on-1.

Delaying as long as he could, Uba slipped Mendonca a nice feed and the Wellington winger made now mistake putting it past Brady with under three minutes to go.

Rinaldi sealed the contest with his second into a yawning Markham cage in the last minute to make it a 4-2 final.

Capriotti made 36 stops in picking up his 14th win of the campaign.

Wellington hosts Toronto on Friday and then takes to the road for games against Buffalo (Sunday) and Lindsay (Tuesday).