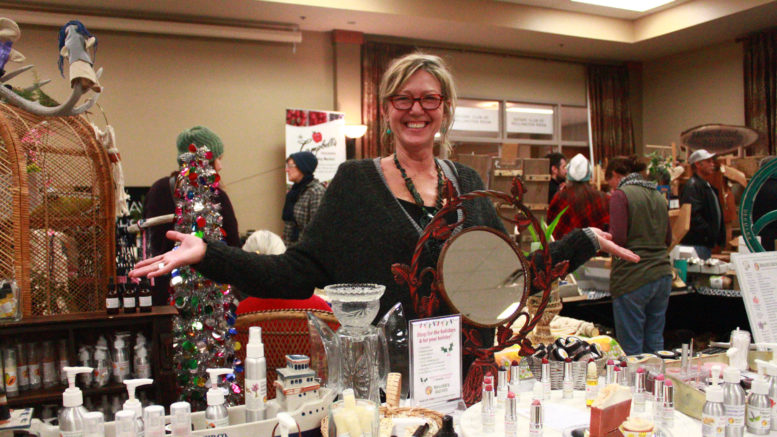 It was the event’s 17th year and may have been one of the busiest ever.

Vendors gathered to sell their wares during the Busy Hands craft show and sale last weekend. Crowds flocked to the Wellington and District Community Centre on Saturday and Sunday as the ever-popular event brought 72 vendors to Highline Hall.

Many vendors who spoke to the Gazette remarked that it had been too busy to get a count of how many customers passed through. All agreed that it was an excellent year for the show. Some vendors were so busy they ran out of stock before the end of the day Saturday and had to scramble that evening to get ready for Sunday.

The event began nearly two decades ago, the brainchild of Vicki Emlaw of Vicki’s Veggies and Bay Woodyard of Honey Pie Hives & Herbals.

“It has definitely been packed the whole day,” Emlaw said Saturday, noting that it only began to slow down as the event’s 6 p.m. closing time neared.

Emlaw said the event’s 72 vendors were all the space would allow. Each of the vendors calls Prince Edward County home, providing a truly local artisan shopping experience.She said while other shows may invite vendors from across the region, Busy Hands has made a commitment to local content.

“We’re all trying to live here and make a living here, so when you bring people in from other places it just means that the people who live here lose out,” she said.

When the show began, it was in an effort to make a few extra dollars before the holidays. As the show grew in size and popularity, the pair figured other local vendors could use a similar boost as tourism tapered off for the winter.

“It came out of necessity,” said Emlaw.

Now that the show is consistently one the most popular for shoppers and vendors, Emlaw said it’s taken on a sort of holiday party atmosphere.

“We get to see everybody that we haven’t seen all year long because everybody has been so busy,” she said. “It just makes a fabulous get-together for a whole weekend and you get to catch up with all your neighbours.”

The event has become something of a tradition for many shoppers. After 17 years customers know they’ll have both quality new options and classic favourites to choose from.

“The great thing about it is that so many people say they come and they wait to get all of their Christmas presents here,” Emlaw said. “They come specifically and they seek out what they want.”

She said many vendors had mentioned on Saturday they were running low on some items due to the volume of customers and other remarked it was already shaping up to be one of the best years ever.

“It’s been very busy,” she said. “After all these years there’s a waiting list for vendors, so I’m very proud and thrilled to be here.”

She said she couldn’t hazard a guess at how many customers had been through the venue — she was just too busy.

Art Hewer of Mellow Manor Kitchens had a similar experience. He said Mellow Manor — which sells a variety of dry mixes for bread, soup and seasonings — has participated in Busy Hands for the last four years.

He said many customers had remarked they’d completed their Christmas shopping at the show. He said it has grown substantially, now attracting people from across the county and beyond. He said the show’s organization is one of the reasons it has become so popular.

“Vicki and Bay have done so great organizing it and advertising it,” he said. “They’re easy people to work with and they just organize it so well.”

He said there’s huge community support for the event and both vendors and customers have fun with it.

For those who built up an appetite shopping, the event also featured some local food options. Gord Groulx and Lori MacRow of Travelling Friar were selling a selection of sandwiches and chili at the event.

She too noted the social aspect of the event and said it was a nice way to wrap up the season.