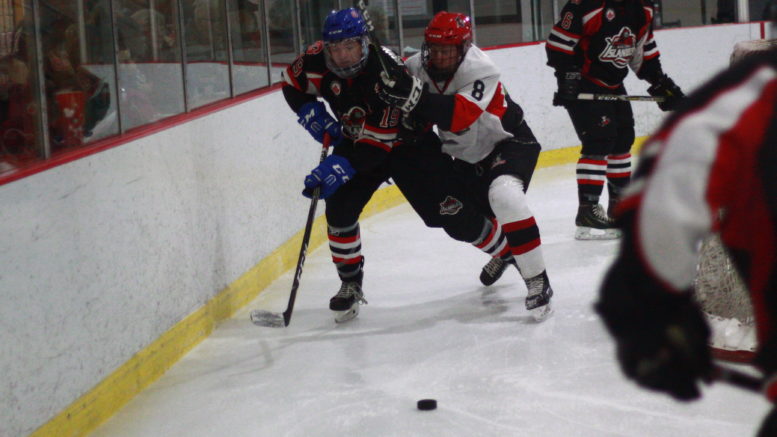 Chalk up another four points for the Picton Pirates.

The local Junior C club picked up a pair of wins this week against depleted lineups with a 6–1 victory over Gananoque Thursday and a 13–2 rout of Campbellford on Friday.

Heading into this week’s games, Picton general manager Chris Masterson said the team took a similar approach with the opponents as has been taken all season long.

“Basically, we need every point we can get and we can’t take anyone lightly,” he said. “It’s the same message that’s been there all year.”

He said Gananoque is an improved club over the start of the year and, even though there were several players out of the lineup, they still have the ability to surprise teams. As for Campbellford, he said it was important for the team to approach the contest the same way they would any game.

“We tell the guys these are two must-have points and we can’t afford to relax,” he said.

The Pirates held a strong possession advantage over the Islanders over the opening 20 minutes on Thursday. Jordon Cannons finally broke the game open with his goal midway through the first with Justin Arnold assisting on the play.

The Pirates held a 15–4 shot advantage through the first period, but Brandon Vandepol’s unassisted marker at 15:42 knotted the game at 1–1 heading into the second.

Just under four minutes into the middle frame Nick Kyte restored the Picton lead on a play from Arnold and Jaydon Wood. Tye Eaton, from Chase Burden, made it 3–1 at 11:03 and the Pirates carried the two-goal lead into the third. Picton continued to dominate on the shot clock, firing 22 shots on goal in the frame compared to four for Gananoque.

Noah Brant connected on a play from Nate Boomhower to make it 4–1 just under five minutes into the third. Tyson Cassidy’s power-play marker from Jordon Cannons extended the lead to four goals at 7:01. Just 18 seconds later Arnold scored an unassisted goal to make it 6–1. The Pirates held a 26–7 advantage in shots in the third and outshot the Islanders 63–15 overall.

Masterson said Kyte had a strong performance in the game. Aside from picking up a goal, he was a force in his own zone.

“He was dominating on the offensive end and defensively, and he was physical,” he said. “For me, he was a real standout in that game.”

The Rebels continue to struggle this season and Friday’s contest didn’t offer much reprieve. Interestingly, the teams entered the second period tied after a scoreless opening frame — one in which Picton outshot Campbellford by a margin of 21–8 — and it was the Rebels striking first.

At the 2:10 mark, Travis Bennett found the back of the net to put Campbellford in front. The lead was short-lived as Brant evened the score 55 seconds later. Riley Manion assisted on the play.

The Rebels were sent to the power play at the 4:44 mark of the second with Chase Burden assessed a minor for cross checking. Dakota Ball capitalized on the ensuing man advantage, restoring the one-goal lead for Campbellford.

But from there it was all Picton.

Nick Hoey knotted the game at 2–2 with his goal from Cannons and Kyte at 10:04. At 11:50, Wood gave the Pirates their first lead of the contest. Eaton had the assist. Just 24 seconds later Will Harrison extended the lead to two with his goal from Nate Boomhower.

Cannons scored a shorthanded marker at 15:42 from Brant, and Hoey scored from Brayden Bertrand and Gerald Bilker to make 6–2 before the end of the frame.

The Pirates were without goaltender Aaron Young due to suspension. Wes Werner was in the lineup, but the club elected to start 16-year-old affiliated goaltender Bailey Maracle on Friday. Maracle made 21 saves on 23 shots.

“Bailey got the win against Campbellford and was really steady,” said Masterson. “He made 21 saves and was really solid in the net, so kudos to him on his first junior victory.”

The Pirates take on the Port Hope Panthers in a home-and-home series this week. The Panthers will visit Picton Thursday and the Pirates are in Port Hope on Saturday. Puck drop for both contests is 7:30 p.m.

Still in the hunt for second place, the team currently sits three points back of Port Hope. Masterson said it could be a challenge for the Pirates to ice a full lineup on Thursday.

“We’ve got a couple of illnesses, a suspension, someone away — so we’re going to have a bit of a depleted lineup ourselves probably on Thursday night,” he said. “It’s just a matter of playing solid defence.”

He said the Pirates will also have to be disciplined if they want to avoid facing a potent Port Hope power play.

“We think we compete well with them five on five, we just have to make sure our special teams are ready to go,” he said.

Masterson said the games won’t make or break Picton’s season, but winning could provide a huge confidence boost to the team.