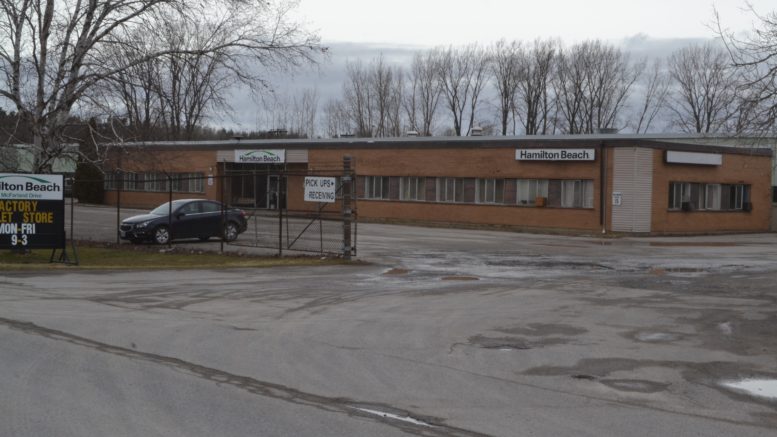 Site work- Environmental work at a former appliance manufactoring plant on McFarland Drive will commence in the coming months after parties indicated in a Ministry of Environment and Climate Change director's orders had their appeal dismissed by the Environmental Review Tribunal. (Jason Parks/Picton Gazette)

An appeal launched by the current and past owners of a property that was a site of historic dumping on McFarland Drive has been dismissed by the Environmental Review Tribunal and monitoring at the former housewares manufacturing plant will commence in the coming months.

A notice of the final decision of the Environmental Review Tribunal (ERT) was posted the the Environmental Registry last week that appelants Hamilton Beach Brands Canada, Carillion Canada, Gerald DiRocco and 2441577 Ontario Inc each asserted that Ministry of Environment and Climate Change director Jim Mahoney lacked jurisdiction under section 18 of the Environmental Protection Act to require that work items in Mahoney’s order be carried out by the parties listed. 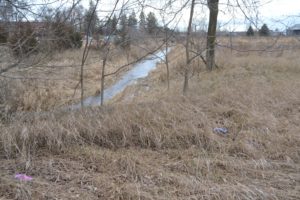 WHAT LIES BENEATH- An unnamed tributary that flows from McFarland Drive to Picton Bay last spring. (Jason Parks/Picton Gazette)

Mahoney issued a final director’s order in April concerning the 10 McFarland Drive property where housewares and kitchen appliances were manufactured from 1962 until the 1975 by Proctor-Silex/SCM Canada.

On June 28, 2013 the MOECC’s Spills Action Centre was advised that several buried metal drums were discovered at the site and analysis indicated the presence of several volatile organic compounds.

Some of these hazardous materials were found at neighbouring locations including structures several metres away from the initial discovery, indicating a downgradient migration.

In addition to soil and vapour findings, evidence of contamination of varying concentrations were found in an unnamed tributary that flows near the property line and eventually discharges into Picton Bay.

As a result of these findings, the director’s order called for the parties to retain a qualified consultant to conduct work contained in the order that included but not limited to: Conduct offsite vapour intrusion sampling, create a series of work plans for off-site groundwater impacts and create a communications plan to address any concerns and/or questions from the community and stakeholders.

“The ministry issued a director’s order to the site’s previous owners, current owners, and tenants (the orderees) in April 2017 directing them to better understand the extent of any off-site contamination,” MOECC spokesperson Trevor Dagilis told the Gazette. “The director’s order also requires the orderees to assess indoor air quality at potentially impacted homes and businesses in the area. The orderees are required to determine the full impact of groundwater contamination, which will involve the installation of boreholes and monitoring wells in locations around the site. Groundwater and surface water samples will also be taken and analyzed.”

The appellants requested an expedited hearing of a motion to challenge the director’s jurisdiction and Sept. 1, 2017, the ERT issued an order dismissing the motion, finding the Director had jurisdiction to issue the Order, thereby disposing of that ground of appeal.

On Nov. 14-15, 2017, counsel for each of the four appellants informed the ERT they were withdrawing their remaining grounds of appeal on the basis the requirements in the order “have been or will be substantially complied within the coming months.”

According to the EBR posting, each noted that the withdrawals are on a without prejudice basis to them raising the same grounds in any future order that may be issued by the director to them.

The appellants also stated that they are withdrawing the notices of allegation on a without prejudice basis and on Nov. 16, 2017, Mahoney confirmed he consented to the proposed withdrawal of the remaining grounds of appeal.

In a statement to the Gazette, Hamilton Beach Canada spokesperson Mary Beth Brault said the company is a non-polluter that inherited an environmental issue created by the manufacturing operations of SCM Canada, a company that has never been related to Hamilton Beach and has since ceased operations.

“Even though we did not create this issue, since 2013, Hamilton Beach Canada, as the current tenant at 10 McFarland Drive, has been voluntarily working with the MOECC as well as the current owner of the property and the successor to the original owner,” said Brault. “The MOECC’s leadership role in the process will determine the timing of any next steps.”