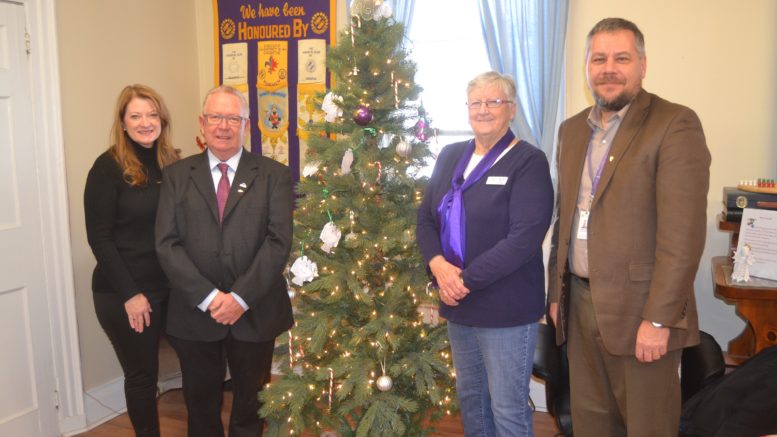 Not that Rose and her band of merry little elves were quite ready to cease all their work and preparation prior to gifts and food boxes being readied in advance of pick up next week.

The office at Benson Hall was still a hectic place Tuesday morning with packages still arriving and angels still sitting on the tree but Mayor Robert Quaiff, HSCA Executive Director Mark Kartusch and Foundation Executive Director Connie Reid publicly thanked Rose and company for their tireless efforts in ensuring each child in our community has a merry Christmas.

For over three decades, Sue Rose has been quarterbacking the program to make sure no child is forgotten this time of year and the angel of the Angel Tree was recognized for her efforts.

Quaiff was glowing in his comments to the Gazette concerning Rose’s ongoing involvement with the much-valued program.

“The Angel tree campaign is a testament of the commitment of the residents of Prince Edward County to make sure no one goes without,” Quaiff said. “Quietly many people deliver gifts in various forms so that those less fortunate can have a happy holiday with family and friends . The efforts of Susan Rose and her volunteers who work tirelessly each year for this campaign speaks once again to why the county is the greatest community to live in.”

“It’s amazing the volunteer spirit that happens here and it’s all for the children,” Kartusch told the Gazette. “The people and businesses and service clubs that donate and make sure the families that are in need aren’t forgotten and it’s is all done here in a respectful way. It really shows what we already know-Prince Edward County is such a caring and kind community.”

Formerly organized through the local CAS office, the campaign now operates under the umbrella of the Children’s Foundation, an autonomous children’s sports, programming and service organization that serves as the charitable arm of HSCA and strives to improve the quality of life for children and youth who are at risk.

Reid said the Angel Tree program is unique and well thought-of in other corners of the Quinte area amongst Foundation staff and board members.

“I am caught saying quite often that I wish I could photocopy this Angel Tree program and put in other places because its just so wonderful and organized. Sue and her amazing team help so many people,” Reid said.

Taking a brief break from her daily duties, Rose said the partnership and support of the Children’s Foundation these last few years has impacted the campaign in a very positive way.

“It’s been wonderful to have this level of support and this kind of organization backing the program.” Rose said. “I can lean on the Foundation staff, ask them questions, utilize resources and develop new ways to help families.”

churches, food banks and other support organizations that help out those during the holiday season in order to align resources and eliminate duplication.

“It’s really made things much easier in terms of time management and it’s helped the program run smoothly,” Rose added.

In total, there will be about 250 local children that will have a better Christmas than if the program didn’t exist this year but there are still a handful of angels waiting to plucked off the tree at the campaign with just a day or two in which to do it.