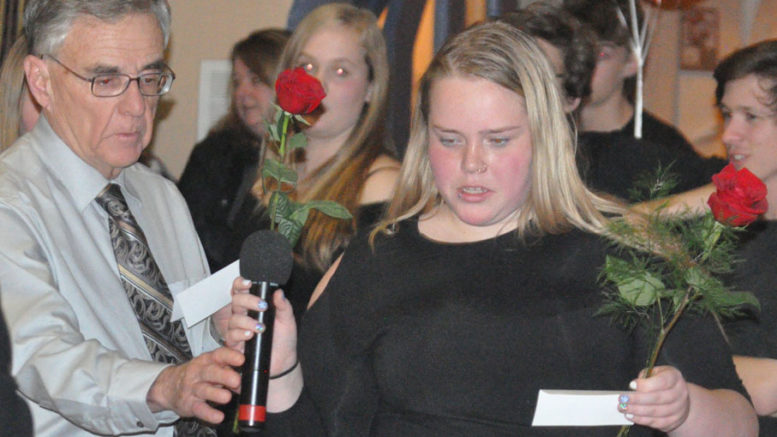 The demographics at the county’s annual Dec. 6 candlelight vigil for survivors of gender-based violence and victims of femicide skewed younger this year with more males in the audience.

A catalyst for those changes may have been the inclusion of the PECI senior drama class production Pink or Blue during the annual event organized by Alternatives For Women at St. Andrew’s. The students were completing their third 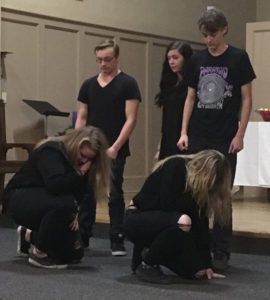 performance of the day after staging the series of vignettes for Grade 7 and 8 classes early in the morning, then moving on to a vigil at Belleville’s Core Arts Centre commemorating the shooting deaths of 14 women in a rampage at Montreal’s Ecole Polytechnique Dec. 6, 1989.

Teacher Matthew Sheahan said for the past seven years, his students have created their own pieces. All of the dramatic works they present were either written or sourced by class members.

“I get them to go out and learn some of the material around Ecole Polytechnique and some of the things that are happening around society,” he said. “Groups talk about what they want to do and themes they want to focus on. From there, they create stylized pieces of drama. I’ll give them ideas how to tighten it up and tweak it a bit. It’s all their original works or something they’ve found.”

The scenes show varying acts of discrimination or violence. One showed a patient that refused to believe his brain surgeon was a woman. Another showed lapses in pay equity. Some revolved around parents’ expectations for their male and female children.

Sheahan said some of the ideas bring to light hidden examples of inequality.

“There are a lot of scenes in this production that for a lot of people, people they know or themselves have experienced something like that. We try to focus on not always the massive things people can see, but also the little things that exist that are pervasive in their culture,” he said. “People see it and maybe it resonates with them, but they haven’t realized it until it hits home.”

Each year, he said he encounters students who are simply unaware of some of the issues discussed. Often, he said, the female students understand the statistics but their male counterparts have a tougher time.

“They’re oblivious in some ways because they’ve never experienced it. It helps them open their eyes that this is not OK.”

Sheahan stated he had actually thought about moving onto different programming this year, wondering if his students could lend their support to another cause. The male students ended up being the ones who changed his mind.

“It was actually the young men who felt it was the most important thing they’ve ever participated in and they felt we need to continue doing this,” he said.

Some of the most touching scenes of the day involved the young players turning to the audience and reading a heartfelt letter they had written.

There were letters written to female role models, letters for friends or family members, and letters to society. Class member Ruby Gaudett actually made her letter a lament about how children are given a pink or blue cap when they are born and how their roles are somewhat predefined.

“That was part of a larger activity with movement as well. Instead of monologues, we decided ‘Let’s write letters for certain things.’ If they didn’t want anyone to read the letter or didn’t want me to read the letter, they put an ‘X’ on it. if they didn’t put an ‘X’ on it, I read it and asked if they’d like to put it in the performance,” Sheahan explained. “We tried to get a range of letters — some where hopeful, some were calling things out.”

The students received a standing ovation for their work. Some audience members also approached members of the cast to share their own heartfelt stories. That emotional connection was the product of the artists putting their hearts into the work and challenging audiences.

“We’ve had several performances this year that were tough. We talk about the fact this is a tough subject. We have to be candid, but we also have to be sensitive to the needs of our audience. It’s like any drama,” Sheahan said. “We know anyone who watches this show is going to be uncomfortable watching some scenes — male or female — but to generate the discussion that should happen, we need to go to uncomfortable places. Drama, art itself, shouldn’t be just about comfort, it shouldn’t be just about entertainment, it should spark debate.”

Borrowing from Gaudett, he said it’s not about making a huge change, but simply about starting the discussion and pushing for change over time.

After the performance, the students joined with audience members to place roses in vase to honour each of the 14 women killed in Montreal and an additional 10 local women who were killed in gender-based violence. With the solemn placing of each rose, a woman’s name was read. Photos of the women were also placed in the church for participants to study as they offered their tribute.