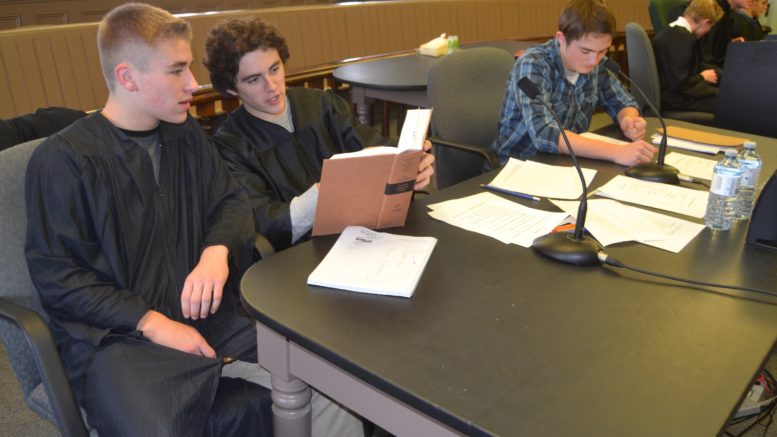 BREAKING THE CODE- (From Left) Crown Attorneys Gabe Goad and Jack MacCool review a section of the criminal code of Canada while witness Dylan Morrow considers his upcoming testimony during a break at the Superior Courthouse in Picton. PECI students were practicing for the Hastings Cup Challenge to be held in Belleville next spring. (Jason Parks/Picton Gazette)

Inside a chamber steeped in history, some senior secondary school law students from Prince Edward County as well as Centre Hastings had an experiential learning experience they likely won’t soon forget.

This year marked the second time PECI has hosted a visiting school at the courthouse as sort of a primer for the competition. 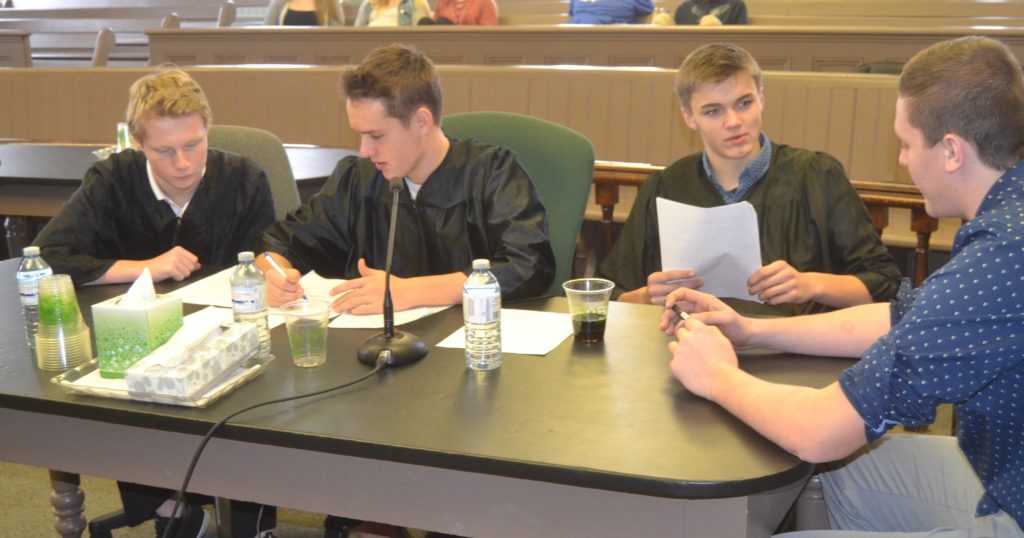 Chris Windfeld, a PECI teacher and the organizer of Tuesday’s exhibition said it was out of necessity in order to provide first-semester students with some experience for the upcoming competition.

“There was nothing like this in the fall and the idea is that it gives this semester’s law students a chance to feel what it looks like and what it sounds like in a courtroom,” Windfeld told the Gazette. “I can have them review and try mock cases but I can’t replicate this scene at a classroom.”

The OJEN drafts and provides the mock cases that are drawn from headlines. Last year, the Oscar Pistorius case was amongst the final trials that PECI was tasked with.

On Tuesday, PECI prosecuted a firearms case where a teen pointed a handgun at a house party.

Centre Hastings was on the defence and educator Adam Gibson said the experience was beneficial to his students.

“It’s really good for our students to get this kind of preparation in advance of the  Hastings Cup,” Gibson said. “We’re so thankful for PECI hosting us today.”

In the afternoon, two PECI teams dealt with the case of murder that occurred at a rock concert.

“In some of the cases, the OJEN really tries to make the cases somewhat outlandish while still using facts and evidence from other cases,” Windfeld said with a laugh.

The mock cases were tried before assistant Crown attorney Richard Floyd who was visiting from his Napanee office.

Floyd had experience on both sides of the bench, having also served as a justice in Antigua.

“We are so happy to have him here for the day with us and he’s been very engaging in the process,” Windfeld said. “He’s pushed back on the lawyers on a few occasions, questioning them and their logic and it’s a real benefit to their development.”

In addition to Floyd, the process was helped by Deborah Maycock of the Crown’s office who assisted with the student clerks and offered tips on court protocol.

Windfeld added the school was thankful to the Ministry of the Attorney General’s office for allowing the use of the court room.